The Spurs Went Streaking In Dismantling of the Wizards

Share All sharing options for: The Spurs Went Streaking In Dismantling of the Wizards

Saturday night the San Antonio Spurs whipped up on the Washington Wizards 106-84. Tonight's focus was momentum. For the most part, the Spurs had it all night. 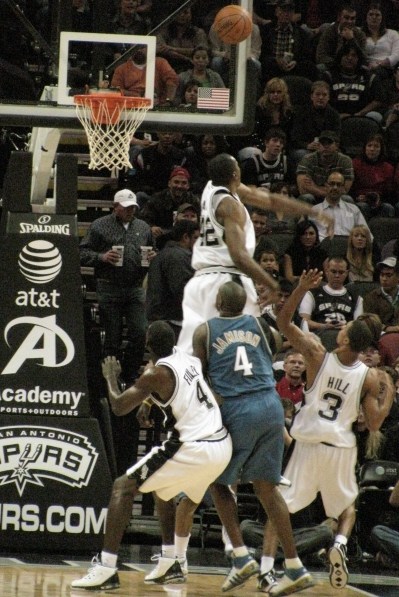 You can go on streaks when you have guys doing this. How high is he? His butt is above Jamison's head.

The first quarter was pretty uneven and a little ragged for the bulk of it. The Spurs got off to a quick 5-0 lead and then the Wizards made some shots. Then Tim clanged away from the perimeter -- he was 1-5 on elbow jumpers on an 8 possession stretch from 8:33 until 5:14. Then the Wizards went on an 8-0 run over the next 2 1/2 minutes to go up 3. The Spurs ended the quarter on a 9-0 as the Spurs scored on 4 of their last 5 possessions, and Wizards went scoreless on their last 5 and 8 of their last 10 possession. 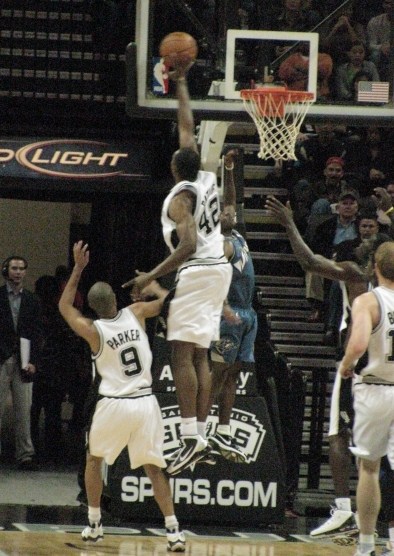 When the game ended, AKA the third quarter

I met Fred at half time and we talked some hoops. Oddly, his demeanor was more optimistic than mine. Maybe not too oddly, he had a beer in hand and I was over-caffeinated. My complaint was that we had kicked the Wizards butts in the first half and we were only up 12 points and that was thanks to a 5-0 run in the last 30 seconds of the first half. 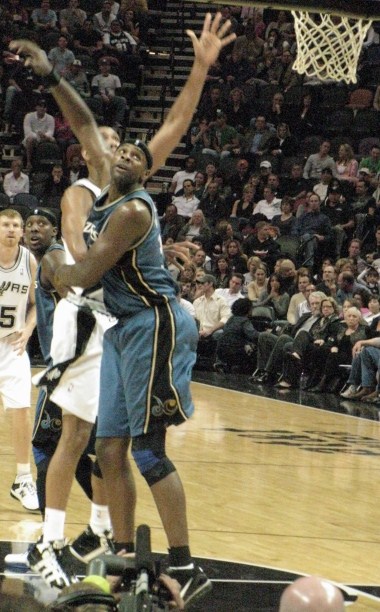 Timmeh with the nice left hook.

They had managed to stay within striking distance due to some shoddy play on our defensive glass and really bad fouls. In fact, the Wizards last 7 points in the quarter were: 1) fouling a 3-point shooter that gave them 2 points. 2) offensive rebound with no attempt to get the board that led to 2 free throws. 3) offensive rebound in the middle of the paint that led to an old school 3-point play. Without those 3 mistakes by the Spurs, the Wizards would have gone scoreless for their last 10 possessions of the half and we would have been up 19. Fortunately, we were also scoring during that stretch of shoddy play or we could have gone into the half in a tight game. 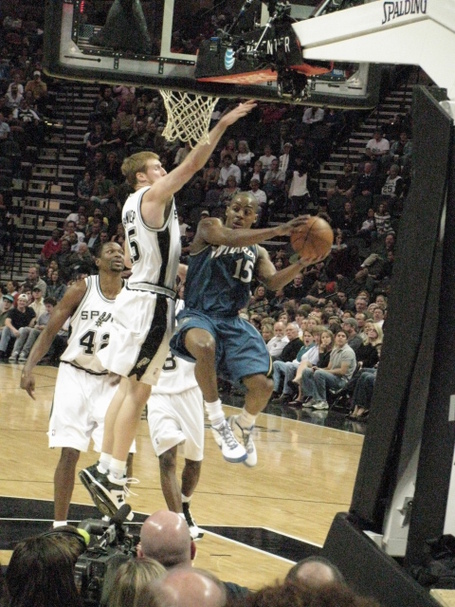 Bonner and the lock down D. Way to challenge the shot Matt. 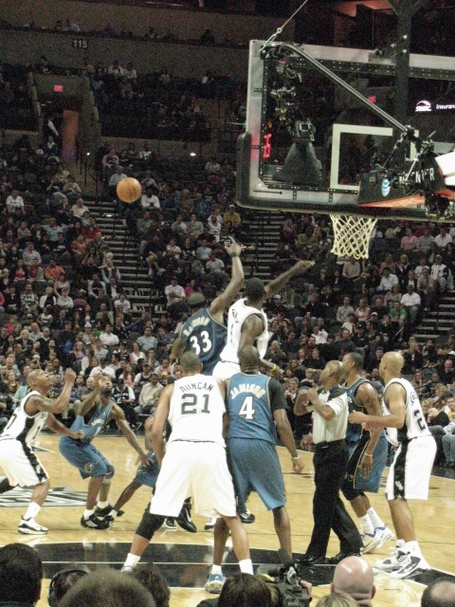 Play of the Game. The Spurs got this jump ball between FinDog and Haywood. Bogans corralled it and went in for a breakaway layup. Arenas made the lamest attempt at stopping it and gave up the and 1. Fred gave Arenas a minus absolute zero on the play.

Strategic Use Of A Timeout

What did Flip Saunders do in that Spurs run to help kill the momentum? He called a timeout, of course. Once the Spurs opened up the quarter with 6 straight points, Flip stomped onto the court which is apparently the international signal for "coach wants a freaking timeout right NOW". Out of the timeout, Caron Butler got a layup. On the next possession Brendan Haywood got a dunk on an alley oop. After that though, the team went back to dribbling and chucking, and when RJ hit his free throws then followed up with a 3-pointer, it turned into an ugly game for the Wiz. More on how ugly in a bit. 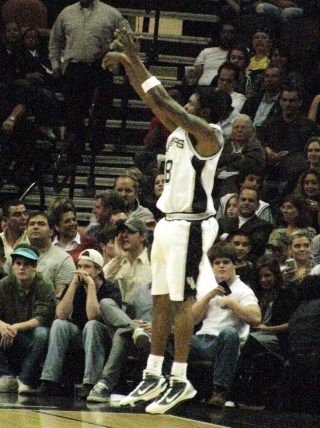 Flip: "Hey guys. Roger's making shots on us now. Do you think you might want to start covering guys?"

Ball Movement: The Illusion and The Reality

We're trying to emphasize attack and drive, not just settling.

When you attack and drive, and then make a shot. There is no assist. So when the Tony drives and kicks to FinDog in the corner, and Finley passes to RJ at the top, and then RJ pump fakes his jumper and then drives for a layup, there is no assist. But that is great ball movement.

The Wizards, on the other hand, had 12 assists on their 28 field goals. I'd bet their ratio of possessions with no passes to field goals made was 1:1. Their team chemistry was terrible and they looked like a bunch of guys trying to get their points. Don't believe me?

The Wizards in Their Own Words 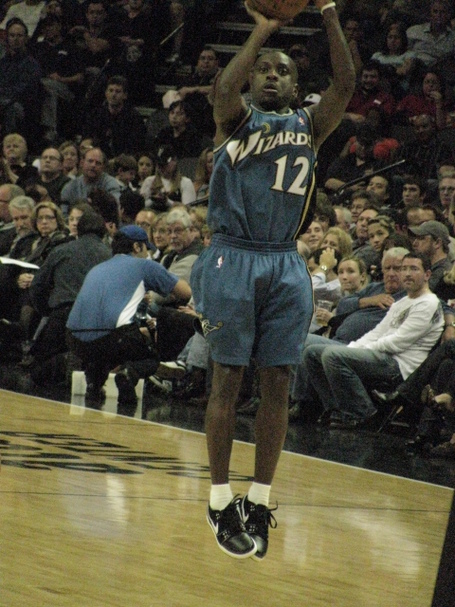 "It's like the same old thing every game. They came out tough. We started playing one-on-one. We started taking bad shots. Can't do it."

"Everyone's got their own individual goals I guess. Hidden agendas."

"I think the only person who actually had to sacrifice was me."

Um, Gilbert, you hoisted a team-high 18 shots and had 2 assists.

As much as we like to give Tony grief about dominating the ball, he isn't Arenas or Boykins. Boykins was doing his AI impression out there last night. His idea of offense was dribbling until he could find a shot or was forced to pass. At one point, he hoisted about a 12-footer with his left hand. 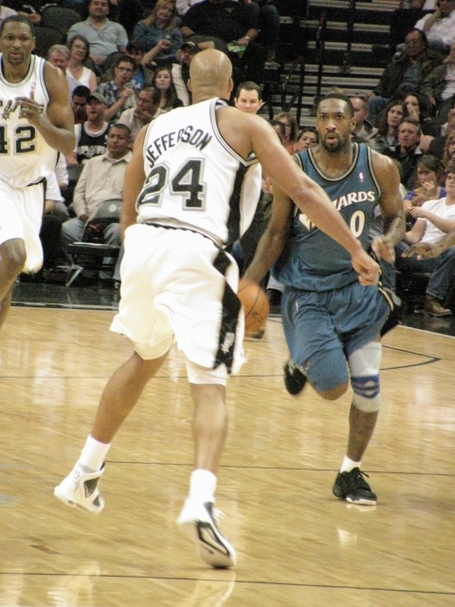 "Man, I'm feeling the need to sacrifice some more."

I think we were all concerned about Tim's knee after the back-to-backs where he logged 41:15 and 38:31. He looked spry enough during the game. After the game I asked him how he felt after those back-to-backs.

"It was really good to have a day off after those games. My body was a little beat up and I had a good recovery time, and I felt good tonight."

Not sure what to make of it. But he said he felt good. I think we were right to be concerned and I think we should make a habit of seeing how he plays in the game AFTER the segababa. 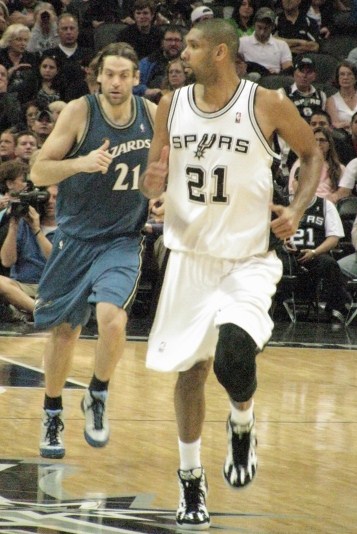 Have you ever seen two guys, besides Bonner, look so funny running. Do you think they are in a spinning class together?

Pop and the Quick Hook

In the first quarter, at the 5:58 mark Tony got subbed out for Hill during a timeout. I'm not sure what happened exactly, but Tony looked upset. At the time, I thought Pop had benched him for the game because of the injured ankle. That's how disturbed Tony looked. When he sat down on the bench, Manu reached forward and gave him a consoling pat on the shoulder. At the 3:10 mark, Tony subbed back in for Rage. Apparently, he was healthy so I kept my eye on him. When Tony came out in the second quarter, he was looking right past Pop like he wasn't making eye contact. From my angle though, which looks right up the sideline on that side. I could see Tony give Pop a little tap on the hip as he went by. Maybe I'm reading something into it that wasn't there, but it seemed like one of those man things where you apologize without ever saying anything. Just a "we're cool let's move on".

In the third quarter, at the 8:27 mark and right after Rage threw a really bad pass to McDyess, FinDog entered for him. Pop never let him get to the bench. When RJ was still 20 feet away, Pop had the whiteboard on the scorer's table diagramming a play. RJ stopped and they talked for a bit. Less than 2 minutes later, Rage was back in the game. 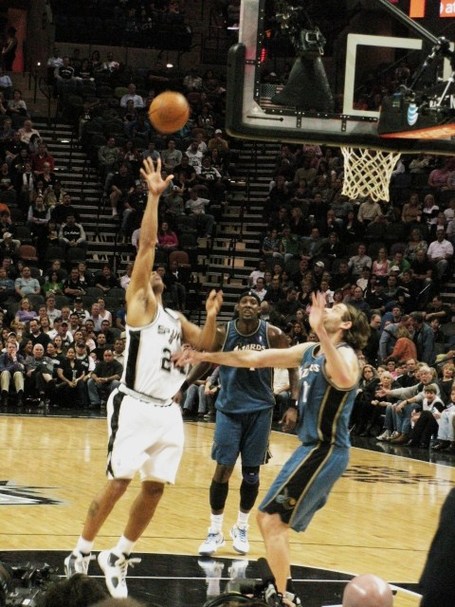 This is from last Saturday's Thunder game. Last week, in the Thunder game in the first quarter is when this sequence took place. It was 6-4, the Thunder with the lead, when Tony drove around a high Duncan screen and took a short 10 foot wide open jumper from just outside the paint on the left side. He missed it.

DeJuan Blair made an effort for the rebound, but couldn't get it. Durant grabbed it about 3 feet from the basket on the baseline. Three other Thunder players, and Blair were in the paint. All four other Spurs were already retreating up court. Durant then dribbled up the court at a decent trot to where we see them here. Then all hell broke loose. Pardon the bad editing.

There are so many things wrong here.

First and foremost, and not numbered on the image is that Blair got beat down court by 3 of the 4 guys who were in the paint. The guy behind him, furthest left, is Russell Westbrook.

For some reason, Durant doesn't pass to Jeff Green immediately. Instead, he gives it to the wide open and unguarded Westbrook. At that time, Rage turns and runs to cover Green who is now being covered by Blair. RJ pushes Blair away and he now has to go find the last unguarded man who happens to be Thabo.

That's Thabo at the top launching a wide open 3. That's Blair in the middle running into Krstic. That's also RJ in the middle who apparently decided he didn't need to guard Green after all. Green is all by his lonesome in the paint 3 feet from the basket. You'll notice that there is 17 on the shot clock. I'm telling you, the Thunder didn't exactly run a fast break here.

When Pop talks about learning the system and guys getting comfortable, I think it is this type of thing. This is the kind of mistake that your veteran guys won't make. Or rarely. This is, however, the kind of thing we get when we have three new guys starting and one of them is a rookie. I'd like to note though that it wasn't the rookie, but RJ, who managed to really bungle the play. Blair just added to it with his slowness getting up court.

Your Impact Player of the Game

Tim already gave you the three stars. I give you the Spurs impact player of the game. 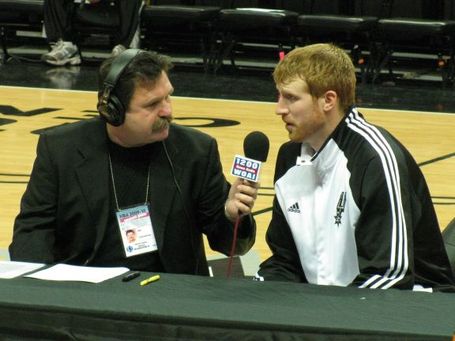