Share All sharing options for: Thunder Execute Spurs [Updated with 3 stars and more]

I'm so hostile right now. Well, I was hostile at the end of the game, a 101-98 loss. I hate losing games like this one. We got out-executed, or as Pop said, "Oklahoma City had more guys play better." Honestly though, I don't think you really have to dig too deep into the stats to understand how we lost this one. We more or less played them to a draw, and they had a couple things go their way. They had 2 more offensive rebounds than we did, but they outscored us 20-4 on second-chance points. They also got to the line quite a bit more than us. Especially in the second half, when we only got to the line 4 times.

Of course, I will dig deeper. It felt to me like we got beat like a red-headed step child. Or, how about killed by a Red-Headed Stranger?

It Was the Time of the Preacher When The Story Began

The first quarter was a slow start for us. The Cowboy Thunderclusters held us to 8 points over the first 6.5 minutes of the game, jumping out to a 15-8 lead. The Durantula got 12 of his game-high 25 points in the first. Eight of those came at the free-throw line. We fought our way back into the game and had tied it at 25 by the end of the quarter. We did it despite the fact that Manu couldn't shoot straight. He was 0-5 and responsible for 5 of our last 7 misses in the quarter (and that includes FinDog's 36' turnaround that almost went in to end the quarter). A big part of the reason we got back into the game, though, was Manu's 2 assists, 2 steals, 1 rebound, and 2 free throws.

Even though we gave up 25 points to the Thunder in the first quarter, I thought we played really solid defense. At least, we played good defense when we set up our defense and rebounded. They got 9 of their points at the line. Of their 8 made field goals, 2 were off the offensive glass and 2 were on the fast break. Additionally, another one or two field goals (one for sure) were set up because the Spurs got lost in transition defense. 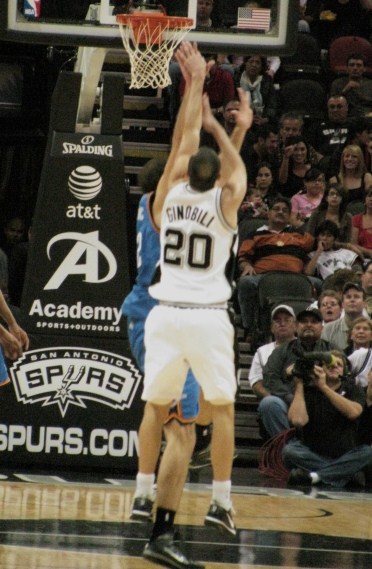 I'm pretty sure he airballed this one.

The Preachin' is Over and the Lesson's Begun

It was in the second quarter that the Thunder really did themselves some favors. They played poorly, and our guys gave the youngsters a lesson in execution. We put up 28 points. We went to the line 14 times and made 12. We shot 8 of 16 from the field. The Thunder went 8-20 from the field and committed 5 turnovers. What they did very well, though, was keep themselves in the game. They scored on their first 4 possessions of the quarter to go up by 4. Their next 12 possessions resulted in 6 points. Four of those were second-chance points. Another 6 of those points came on a pair of drives from Green and Westbrook where they got and-ones. Without those 4 plays, two hustle and two athletic, they are down 17 at the half instead of 7.

Sir HotBod played some serious-ass lockdown defense on Durant. Cubits was phenomenal defensively against KD. He denied, he challenged, he worked early in the possession. He was just awesome. Nothing I can say can capture how well he played Durant. I know, I know. Lauri is torn. Durantula or Sir HotBod? 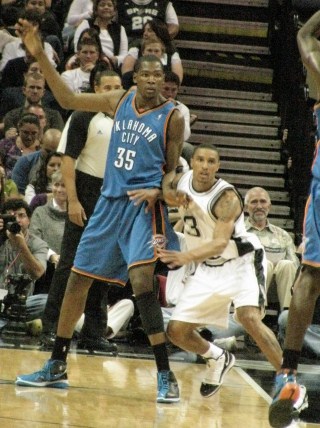 No, that's not Muggsy Bogues covering Durant. Somebody needs to talk to Sir HotBod about his posture. 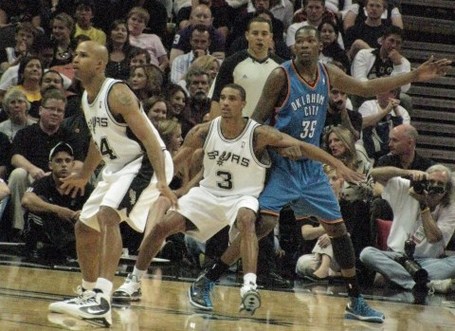 "My man can't score if he doesn't have the ball."

The Lesson is Over and the Killin's Begun

The third quarter was an abomination for the Spurs defensively. The ThunderCats had two separate streaks of 6 possessions where they scored. They shot 15-24 in the quarter. They hit both their 3's for the game and managed 3 offensive rebounds on those 9 misses. Oh, and 1 turnover. 32 points on 22 possessions for the quarter. Those are ass-whipping numbers. Miraculously, we were never down more than 5 in the quarter (despite our 5 turnovers) and entered the 4th quarter down 4. Why? Because Tim was carrying our butts. He had 22 points on 9-13 shooting. Well, it was Timmy and Sir HotBod. HotBod had 13 points on 5-7 shooting (one of those misses was an end of quarter toss from 30+ feet).

(I'm back at home now, 3:30 hours after the game ended, and I'm still a little bent out of shape about this one.)

Surprisingly, it wasn't Durant that killed us. It was Russell Westbrook who tore us apart. And I mean he really tore us apart. He worked us from many different spots and we didn't have any answers. For the quarter, he had 9 points, 6 assists, and 3 rebounds. They posted him up. They ran side screen and roll. They ran isolation. They ran high screen and roll. They looked like they were scoring at will. My initial recollection is that Westbrook did most of his damage against Parker. However, he had 5 points and 3 assists in the first 7:42 against Tony and 4 points and 3 assists in the final 4:18 against George. 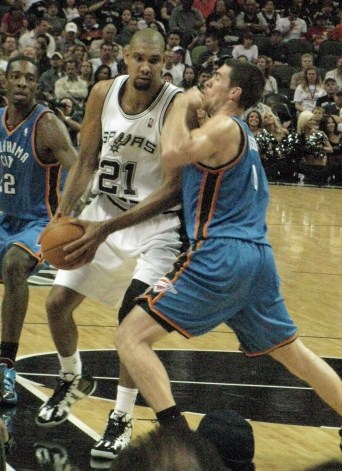 An' just when you think it is over, it's only begun.

The fourth quarter got off to a terrible start. Harden got a 3-point play and RJ fouled Durant on the break and just like that we were down 9 points 1:12 into the 4th. We fought back and made a game of it. We scored on 7 of our next 8 possessions to make it a 1 point game with 5:57 to go. Most of our offense came from San Antonio McDyess, who hit 3 jumpers -- Antonio had 9 of his 10 points in the 4th quarter. In that stretch, the Thunder managed to scrap together 6 points, 2 from Sefolosha and 4 from Collison. One of Collison's buckets was a running hook from about 6' that the Spurs would give him from now until forever. These were big buckets their role players contributed.

The next 4 minutes and 39 seconds was some horrific offense from our guys. We scored 2 points on 1-8 shooting and one turnover. One possession took us three shots just to hit the rim. We managed to scrap our way back into it and keep it interesting. However, we didn't execute in crunch time, either. Tony had a turnover with 39 seconds left. RJ had a turnover with 16 seconds left. Now, when I look at the play-by-play, I understand why Pop said we were beat because they executed better than we did. It's almost, yes almost, like he knows what he is talking about. 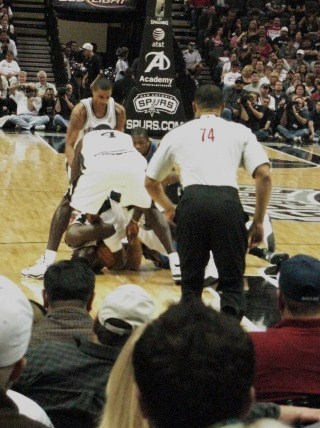 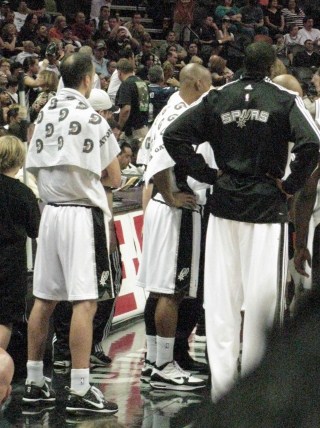 Our chances of winning go down A LOT when he's not playing in the 4th quarter.

Rage, where did you go? Wednesday night you took 23 shots, were aggressive, and manhandled the Mavericks. Tonight? Four shots. Yep, seriously bro, you took 4 shots and scored 4 points (kudos, though, for making both your free throws). 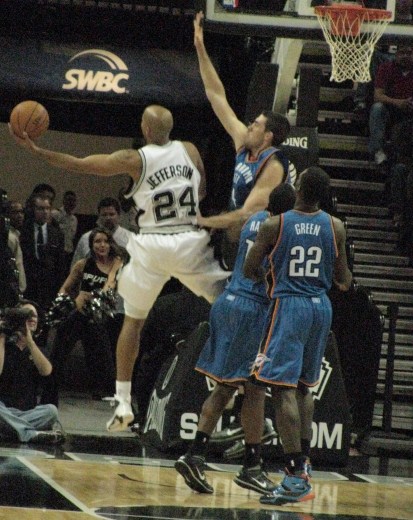 Before the game, I wrote down my keys to success. Here they are:

Here are your 3 stars:

3. Antonio McDyess - 10 points and 6 rebounds in 20 minutes. He make big shots down the stretch and grabbed some big rebounds. Exactly what we need from him.

2. Tim Duncan - Efficient. 22 points on 14 shots. 10 rebounds, 3 assists, and 2 blocks. Zero points in the fourth quarter of a close game limits you to second star though.

1. George Hill - His 18 points were only impressive for when he scored them. He scored almost all of them when his team really needed a bucket in stretches of the third and fourth quarters. His first half buckets came when he found himself covered by Jeff Green and in both cases he cleared out his side of the court and got an easy bucket. Still, George was awesome defensively. Durant had 2 points on 1 of 4 shooting in the second quarter. Those two points came on the first possession when he curled around a high screen and hit a 16 footer. After that, he got nothing. In the fourth quarter, George stole the ball from Durant twice. Btw, George played 32 minutes. He never left the game after entering in either half.

If George is this good, and Pop keeps calling him the best player and one of the most improved players in the league, then who gets the crunch time minutes?. With Tony, George, Manu, and RJ you only have 3 positions. It's a nice problem to have and I am going to be VERY interested to see how this goes when everybody is healthy. You can't bench your best 2-way player when the game is on the line, and right now, that guy is George.