Well, none of us want to talk about it, but it can't be ignored. The Oklahoma City Thunder seem to have our Spurs' number. This is an attempt to figure why they beat us this time.

As much as the Thunder seem to always give the Spurs nightmares, some troubling trends appear when confronted with actually watching this game as it happened. Some of the same problems that have caused us to lose other game were apparent in this game, but more frightening is that an adjustment made by the Spurs seemed to exacerbate one of those problems. Some of the issues are with the mental side of the game, but what's worse is that collectively, the Spurs didn't seem to have the heart required to win a game against a young, hungry team like OKC. Follow me beyond the jump for incoherent rambling disguised as analysis.

As a starting point, I decided to get a look at the shot chart for this game, and compare it to the one that Graydon over at 48MoH used to help dissect why we won the game against Dallas earlier in the week. It was a somewhat helpful excercise, even if it doesn't tell us the whole story.

First, here's what happened against the Mavs: 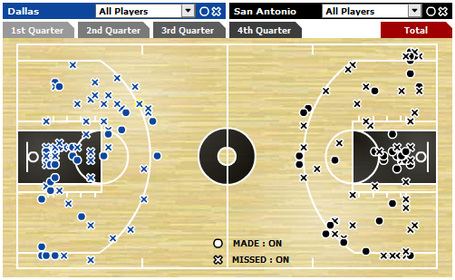 It's a simple concept, but executing this type of strategy has been less than a foregone conclusion for the Spurs this season. Against Dallas, they did a pretty good job of executing their offense, as is evidenced by the shot chart. On the defensive end, it doesn't seem like the Spurs had such an obvious edge from the visual aid.

And now, the shot chart from last night's game against the Thunder: 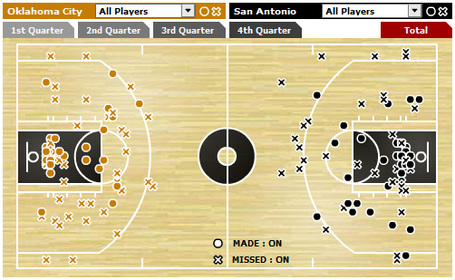 A couple of things stand out here for me, from a defensive point of view. First and foremost, there are a lot more OKC made baskets near the rim than in the Dallas shot chart. Second, OKC couldn't miss from the top of the key. On the offensive side, the Spurs seem to have taken a few more shots from the 10-15 foot range against OKC. If they hadn't made those shots at a very good clip(they did), this game would not have been as close as it was. Basically, the Thunder did an excellent job of executing their game plan, to the detriment of the Spurs.

So, why was OKC able to do such a good job of executing against us? Are they just a terrible mismatch for us, or was there more to it? As someone who watched the entire game somewhat perplexed by what was happening, let me tell you that there was definitely more to it.

Make no mistake, the Thunder pose several problems for the Spurs. But no matter what anyone tells you, age has very little to do with it.

First, OKC has the personnel to negate the Spurs biggest advantage over most other teams: our backcourt is extremely skilled. But let's take a look at the Thunder backcourt for a moment, shall we?

I probably don't have to tell how ridiculous it is for a team to have that much length in the backcourt, but all 3 of those guys are also fast and very athletic. And this is without making mention of the first backcourt player off the bench for the Thunder, James Harden(6'5", 6'11" wingspan). 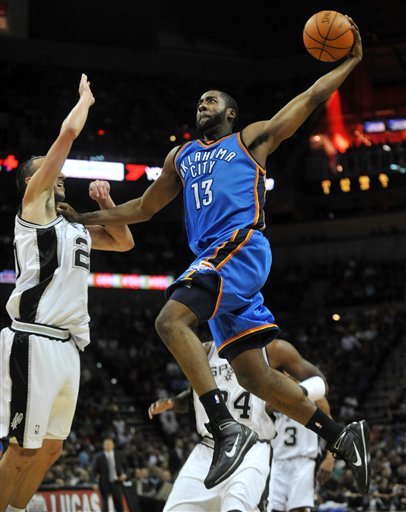 Look, it's our Manu vs. their Manu. Nice try, but you still can't beat the original.

The Spurs only have one backcourt player who can match that combination of length, speed and athleticism, and he had an excellent game as a result. You probably already guessed who that player is: George Hill.

So, we've got that mismatch discussion out of the way, and it's pretty obvious that was a factor in the game. But this was a very winnable game for the Spurs, and for all the talk of mismatches and chemistry, the key to the loss was much simpler than that: it came down to effort and heart.

This was a painful game to watch. Even though the box score will tell you that OKC shot 46.8%, the same percentage as the Spurs, the defense in the second half was almost as bad as it was against Toronto on Monday.

Watching it live, one would have observed many, many uncontested jumpers in the third quarter. First the jumpers were coming from the likes of Nenad Krstic and Sefalosha, but then even Durant was getting them. Nobody in a white jersey even attempted to get a hand in their shooters' face for the better part of the third quarter. Sure, they were mid-range and long-range shots, but the OKC shooters had time to set up and a clear look at the rim.

The Spurs followed that with a 4th quarter in which they allowed the Thunder to penetrate the interior defense almost at will. Even though most of the shots in that situation were being contested, they were still going in - once you get that close to the rim, it takes quite a disruption to make NBA players miss.

As mentioned earlier, Cubits is the only player who matches up favorably with the Thunder backcourt from a physical perspective, and it showed. Our backcourt players not named George Hill went a combined 12-39 from the field. To be fair, Manu alone was 0-8, but the other guys either weren't taking a lot of shots(because they couldn't) or weren't making them. Either way, the offense was ugly and disjointed. In particular, Richard Jefferson was very tentative, and definitely wasn't doing the kind of damage he is capable of.

There was also a very bizarre sequence in the second half, when Bonner had a 2-1 break after a steal. Rather than taking it to the paint, where he could finish or dump it off to the trailer, Matt stopped and dribbled backwards out toward the perimeter, waiting for everyone else to get back down the court. The Spurs didn't score on that possession. This was just one example of the Spurs seemingly not wanting the game bad enough to do what was necessary. Matt's played pretty well off the bench, but that kind of thing is inexcusable - at the very least, he could have drawn a foul on Durant(the only OKC player that was in front of him).

Richard Jefferson wasn't taking the ball to the rim, and instead kept deferring to Tony Parker, Hill and Tim Duncan, even though his strength should cause a hell of a mismatch with Durant. In Hill's and Duncan's case, this was a good enough strategy, but I still would have liked to see RJ try to use his strength to power his way to the rim more often. I saw him do just that... once, and he went to the free throw line as a result. Deferring to Tony was a mistake, however. The wee Frenchman picked a bad game to come back from his ankle woes, as the aforementioned Westbrook was able to harass him all night and force mistakes. Tony will be back in full one-men fast break mode soon, and probably would not have looked as bad or as slow if not for the missed time. But RJ shouldn't be deferring to Tony on offense. When you're the team's leading scorer, you should always be looking for to get yourself involved first.

A few other telling stats from the box score are 3-point percentage, offensive rebounds and blocked shots. Quite frankly, I'm getting really tired of seeing the latter two stats being skewed like this every single game.

Both teams made 16.7% of their threes, but we took 6 more shots from deep than they did. Once again, Mr. IUPUI was our savior, making 2-4 for the only respectable 3-point shooting night of any Spur. Manu was 0-4, and The Zombie was 0-2, so our 2 most prolific wing shooters weren't exactly lighting the nets on fire.

The blocks are getting old. As much as I love Cubits, he seems to get a couple of his shots blocked in every single contest, and tonight was no different. Normally, the Spurs are on the wrong end of the blocked shots comparison, but it's usually close. Last night the disparity was 10-3, probably due to the ridiculous length of the Thunder lineup. Still, it would be nice to see George learn to finish with his left hand, and for Dejuan Blair to be a bit more patient(ball fakes, maybe?) when he gets the ball under the rim.

Speaking of Blair, the 10 offensive rebounds for the Thunder, while not excessive, should not be happening when either Blair, Duncan or Antonio McDyess are in the game at all times. Duncan and Dice mostly did their part, but Blair was remarkably bad on offense tonight, and only got 1 rebound to boot. Somebody needs to light a fire under him, because he didn't even seem very interested in getting after the boards tonight, from what I watched.

Anyway, I hope all this made sense. If not, it was the allergy medicine talking. Let's hope the Spurs won't suffer from a lack of effort again on Wednesday night in Dallas. Win or lose, they should at least be giving us more effort than we saw tonight after Pop lays into them during video sessions.