Spurs go back to winning ugly in beating Mavs

Share All sharing options for: Spurs go back to winning ugly in beating Mavs

After the terrible defensive performance against the Raptors, and against a Mavs team that had put up 250 points in its last two games, I would have had three points of emphasis coming into tonight's game if I was Gregg Popovich. After the game, I would have put an A++ next to each one. 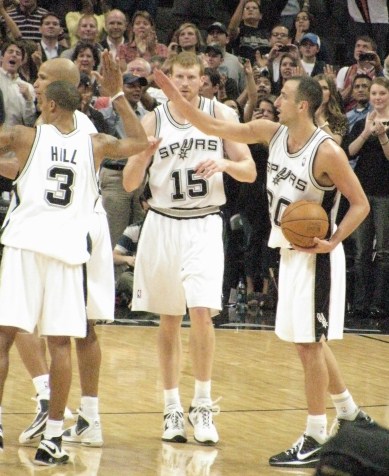 These guys all played well.

As always, photos by JanieAnnie

The Game in a Nut Shell

On the locker room board as my points of emphasis would have been these three things:

The Spurs gave up 2 -- yes, you read that right, two -- points off turnovers and only 9 fast break points. This is a truly remarkable number. But, we'll get to that in a little bit.

The Spurs allowed the Mavericks only 11 offensive rebounds. Only 5 after the first quarter, and NONE in the fourth quarter. Yes, NONE. ZERO.

The Mavericks shot only 35.4% for the game and they got remarkably few open looks. The Spurs defense did a tremendous job of challenging everything. I don't think you have to over-analyze it either. They worked their butts off, played hard, and focused.

The Game in a Peanut Shell

Yep, Rage had a great game. Well, just short of great. 29 points, 7 rebounds, 4 assists, 3 steals, 1 block while logging a whopping 41 minutes and shooting 11-23 from the field, but only 5-10 from the line. Ok, who am I kidding? He was fully great. He made plays all over the court. He hustled for loose balls, deflected passes, and threw down a nasty dunk on Dirk's head. More like NEAR Dirk's head because Dirk got out of the way. He did a fabulous job of saving possessions on offense by forcing his way into the middle and getting points late in the shot clock. 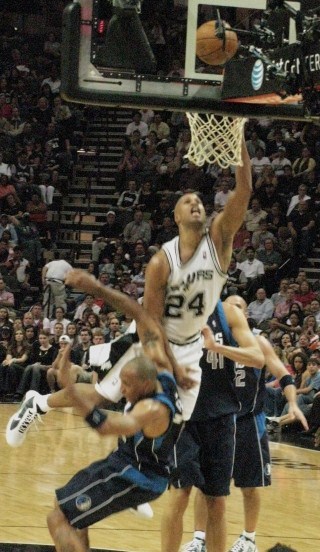 One of two "And 1s" that Rage had on one possessions. 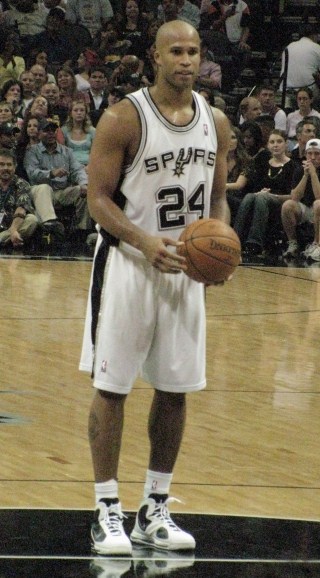 Unfortunately, he converted neither.

The Game in an Alfajor

We won this without our Big 3. Tony and Tim didn't play, but Manu wasn't great either (like I thought he would have to be for us to win). The telling stat for me was his zero free throw attempts. We ran a LOT of offense through Manu and he didn't get to the line. However, that's not to say that he was bad or that I think he wasn't 100% healthy. He was one of several guys who had very solid games. 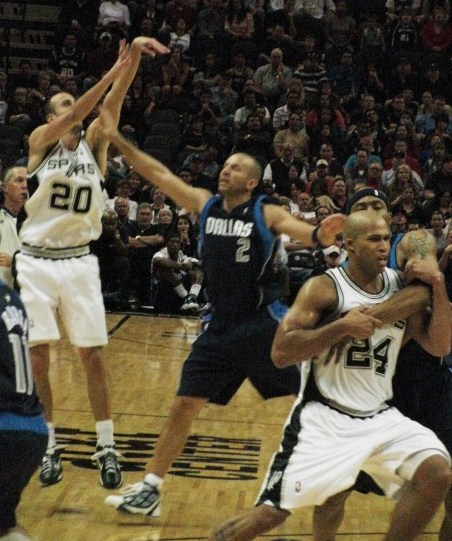 Manu's 3 to end the first half.

The Game in a Cage Match

SAM played the game like it was a playoff game. Start to finish he was rugged. Up-in-your-man defense and hard fouls. He even picked up a technical for grins. I think Antonio more than anybody set the tone for the game. Right out of the gate he let Dirk know he wasn't going to get anything easy. He challenged Dirk for position. He challenged entry passes. He maintained body contact with Dirk the entire time. He also found time to make a few jumpers, grab 9 rebounds, and get 3 steals. He also deflected a couple more passes. He was a big, giant pain. Easily his best game in a Spurs uniform.

The Game in a Haunted House

The Bogeyman also had his best game as a Spur. Getting his second start of the season he logged a very solid 34 minutes. He made corner 3's when he had them and he moved the ball when he didn't. Like McDyess, it was on the defensive end where his impact was greatest. He played really tenacious, physical defense. 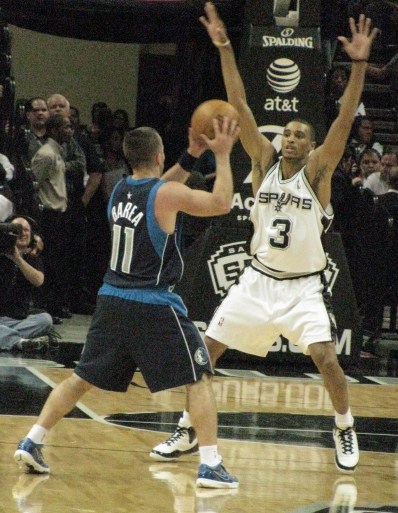 The Game in the Fast Lane

The Spurs did a tremendous job in transition. The Mavs, and most importantly Kidd and Marion, were never able to get out on the break with any consistency. The Mavs fastbreak points by quarter: 3, 2, 2, 2. I find this a remarkable feat for a couple reasons. One, the Spurs had 13 turnovers. 13 isn't a super-high number, but they weren't turnovers that stopped the clock like offensive fouls and travels. Many were turnovers in the paint and at the top of the key. These are the most dangerous kind and the Mavs weren't able to capitalize. Especially in the fourth quarter, when the Spurs had 6 of their turnovers including 3 of the first 5 possessions.

The second thing that makes it remarkable is that the Spurs took a HUGE number of perimeter shots that usually lead to long rebounds and fast break opportunities. Especially with players like Kidd and Marion who are great at tracking balls down AND running. Not only did the Spurs take 34 3-pointers, they took 24 2-point shots outside the paint.

We won an ugly game. Winning ugly games is great. As I stated before the season started, I hope we can get back to winning games against good teams without having to play great. This was the first example of us doing it.

We beat an old team on a SEGABABA. The Mavs are old like us. We were hungry and more desperate. I think our intensity and comparative freshness were enough tonight.

We relied WAY too much on our outside shooting. The only person who was really able to get anything in the paint was Rage. George and Manu were really kept out of the lane last night. I don't know that either one made any layups and they combined for 2 free throws.

Photo Description of our Defensive Game Plan on Dirk 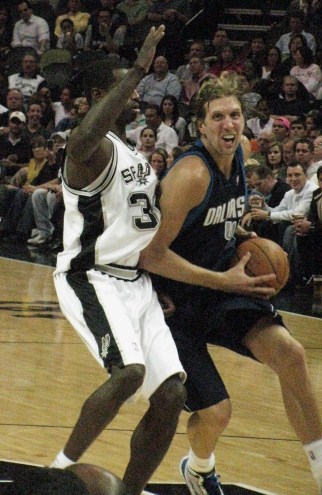 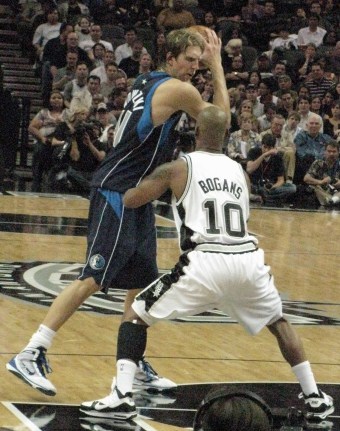 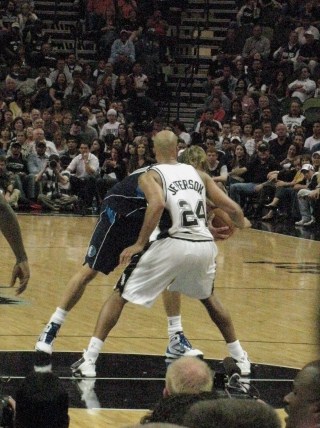 I think you guys get the idea.

Random Stuff You May Not Have Picked Up From TV