So, Tim Duncan and Tony Parker are unavailable for a second straight game. Last game, we played defense for about 1 minute, but we can't get away with that tonight.

So, how is Pop feeling after that defensive "performance" on Monday night? Let's take a look at his game plan. 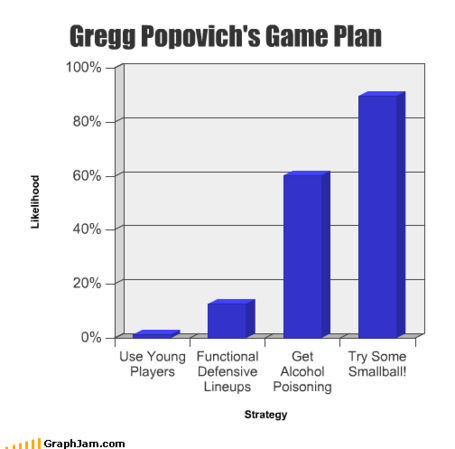 Yeah, just like we thought. Ian Mahinmi might actually be useful in a game like this(if he could stop fouling), but it seems as though Pop wants to keep him as far away from the floor as possible. Malik Hairston? Yeah, maybe if we're down by 30, he'll play all of 5 minutes. Marcus Haislip? He was active for the Raptors game, but never saw any floor time. Dejuan Blair and George Hill figure to be the only young players Pop uses this season, and that's only because he has no choice. But our old guys are slow, and incapable of defending Mavs players not named Jason Kidd. OK, scratch that - they can't guard Kidd either. And, for as much as we like to make fun of them, Dallas does play defense.

Davis says the Mavs are going to win. Unfortunately, I have to agree. You guys might want to keep the Pepto nearby, because this is gonna be hard to stomach. Unless the Spurs decide to make things happen on the defensive end, that is.

The Spurs and the NBA today announced their TV Companion. It is an online interaction thing for people watching the game on television (or on their computers). This should be the link for tonight’s game. http://www.nba.com/tvc/index.html?gamecode=20091111/DALSAS&brand=SAS

And remember, if you find an illegal feed, don't link it here. You can shoot me an email if you need any help finding a way to watch or otherwise monitor the game.