Share All sharing options for: Let's Play Some Defense: Kings-Spurs Recap and Analysis

The Spurs and I were both looking to play some lock-down defense Saturday night. Come on in, and I'll tell you how we fared. All non-costume photos by JanieAnnie. 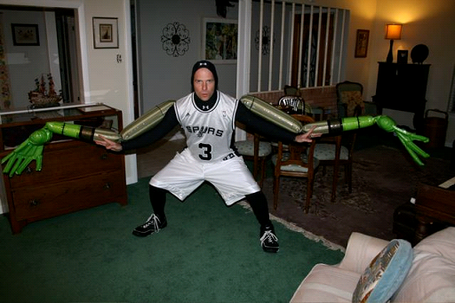 This is my Halloween costume. I call it 'Cubits Ninja Bot'.

We won. 113-94. It was a blowout from the late-second quarter on. We went on a 12-2 run over the last 3:30 of the second quarter to extend the lead to 16. The Kings never got closer than 14 down (twice in the third quarter) the rest of the way. Which is really amazing, and worth remembering, as we delve into the meat of the post. The lead got as high as 28 early in the 4th quarter. Oh, and Manu killed a bat.

After wandering around a bit, I found the media workroom where they had these cool printouts and I got my idea for what I was going to do. The printouts were diagrams of half the court. Row after row. 16 per page. Magically, I had a game plan. Here it is.

The Kings are a very poor defensive team. I didn't think I could really learn much about us from the way we performed offensively. Our defense, on the other hand, might be more interesting against a young Kings squad led by Kevin Martin. Against the Bulls, our defense and rebounding was terrible. I was betting that Pop would make a point of playing better defense so I thought I would do a shot chart for the Kings. Possession by possession, where did they take their shots from and who got the rebound.

A quick glance at the box score would tell you the Spurs played adequate defense. The Kings shot 44.6%, which isn't bad. A little more alarming are the 14 offensive rebounds we gave up and the 33 trips to the free throw line. However, I think we played a good overall game defensively, it's just that we were absolutely atrocious in the third quarter. For the game, I would give us a C+. For the third quarter, I would give us an F-. How bad was it? Here is Coach Popovich's opening statement of his post-game interview.

We gave up 30 points in the third quarter and we didn't want to end the game by being sloppy.

How sloppy? Horribly sloppy. How we managed to extend our lead during the quarter is beyond me. Let's start with a table.

NOTE: I count as a score any made basket OR trip to the free throw line. It basically represents that the team had a successful offensive possession. 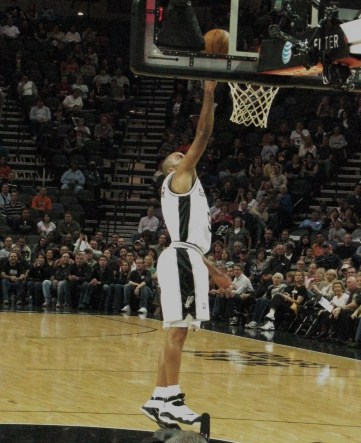 See all the Kings defenders? Well, of course you don't. This is Tony on the fast break. However, that's what we were doing in the half-court sets.

In the quarter, the Kings also had 6 offensive rebounds while shooting 11-18 from the field and 7-11 from the line. Of the 10 rebounds from missed field goals AND free throws, we got 4 and they got 6. ICK!

Yet, we still managed to increase our lead in the quarter. 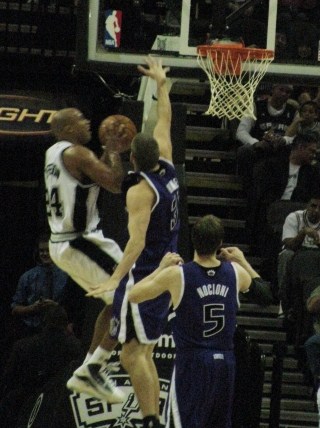 Rage made a tremendous play on this, and I'm impressed that JanieAnnie got this shot. He was clobbered by Hawes and knocked backward but still managed to get the shot up and in for the And 1.

The first quarter wasn't great for us defensively. The Kings shot 50%, and we only got stops on 14 of 27 possessions. The second quarter was spectacular, as we held them to 18 points on 26 possessions, and only allowed them to shoot 35% (Spurlady: They were at 42.5% for the first half.) The fourth quarter was very solid and would have been statistically dominant if we hadn't given up 5 scores on the last 7 possessions in the last 3:30 of the game. 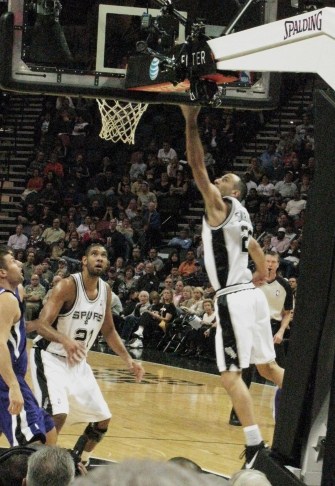 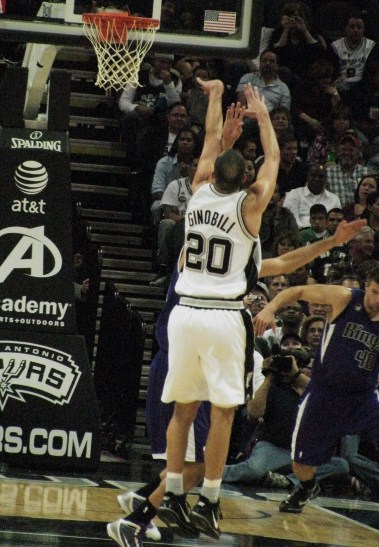 As BlaseE noted in his game stats post, George Hill is awesome. He owned this game for the last 15 minutes. Somehow, he managed a -6, but he was fantastic again. He did a good job of making a unit of Bogans, Blair, Ratliff, and Mason productive and allowed them to sustain the lead. Nothing could be finer. Seriously, look at his stat line. 18 points. 7-12 FG, 2-3 from beyond the arc, 2-2 free throws, 5 rebounds, 1 assist, 1 steal, 2 blocks.

Highlight of the Night - Non Manu and The Bat Version

I was walking up to my seat past a guy who could pretty accurately be called 'ATS Spurs Fan: Hispanic Version'. Spurs jersey: check. Cold Beer: check. Pretty damn hairy: check. Too hairy to wear a jersey without an undershirt: check. Wearing a jersey without an undershirt anyway: check. Really, the only thing he was missing was bald. Fortunately for him, he has lots of hair. He's got great seats. He's right behind the basket, about the 15th row or so. I'm walking by, laptop over my shoulder, to hit my seat for the start of the second half. I look up and see the guy and he just tosses out a fist for a fist bump as I go by. Of course, I oblige. TUMP! That was it. I don't know WHY he did it. I don't know if he did it to everybody. But it was freaking awesome. Just some random guy. Totally made my night.