Preseason Preview: Olympiacos Piraeus vs San Antonio Spurs a.k.a. The Spurs Take On The Olympics

Share All sharing options for: Preseason Preview: Olympiacos Piraeus vs San Antonio Spurs a.k.a. The Spurs Take On The Olympics

The weekend is here and the Greek circus is in town! Well, not really, but they are mostly Greek and they will traverse American soil for the next few days under the troupe name "Olympiacos Piraeus," facing off against a bevy of NBA teams eager to show their shiny new weapons.

On a more serious note, it's the second game of the preseason. Hopes about this Spurs team's potential is sky high and about to blast through the roof. Still, Coach Pop couldn't give a damn about winning. Or maybe he will, given that it'd be shameful to lose to a European squad, albeit this team is one of, if not the best Euro team around.

After the jump, you might want to close your eyes. This thing's gonna get ugly after a DeJuan Blair rebound or (twenty)two.

Before we get to the real preview, allow me to waste your time, because you know, recently I've had time to waste so why not share it with others, right? My crazy pills-level insanity has me thinking, "Aside from yummy but smelly Greek food, and maybe a semblance of decent competition, what can this Olympiacos team give us Spurs fans?"

My mind quickly flips through several ideas until I realize the answer is right in front of me: Olympiacos. I don't know what the hell it exactly means but it sure does sound close to the word "Olympics." And hey, will you look at that. It's from Greece! How can we not make the connection? Yeah, yeah, I'll stop yakking now and get to the point in the next paragraph.

Using jollyrogerwilco's power of the CADTWNHMS, it made me wonder: if the Spurs were Olympians, what kind of sport would they be playing? D'oh! Of course it's basketball. Right, I'm such an idiotic d-bag wasting everyone's time. But really, aside from playing around with a round orange ball, what kind of Olympic events would they excel in? 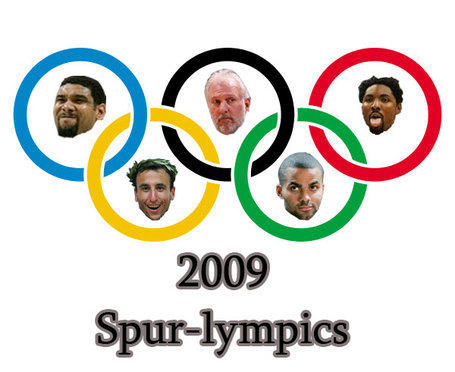 Spur-lympics: Where wine tasting is a real sport.

Thanks to lazy ass photo-chopping, dreaming out these certain scenarios is now possible. Or as Barney Stinson puts it best, "possimpible" - the nexus between possible and impossible. Don't even ask me to elaborate on that one. Just trust me that awesomeness abounds. Anyway, these inputs are purely personal, and if you have nothing to do before game time and want to contribute your own, you can do so in the comments section below. Thanks 'twas nice knowin' ya see you next twenty years bye!

Oh, and before you scroll down any further, here's a video of all sorts of Olympic WIN enough to make your competitive juices flowing:

The Olympians from San Antonio

Let's start with the easy one, shall we? We all know Tee-Pee's a speedster, so I put him in short shorts and loose tank top, which I believe Eva would like to be Tony's new night wear. I just hope he can give the ephemeral Usain Bolt a run for his golden shoe-loving moolah. 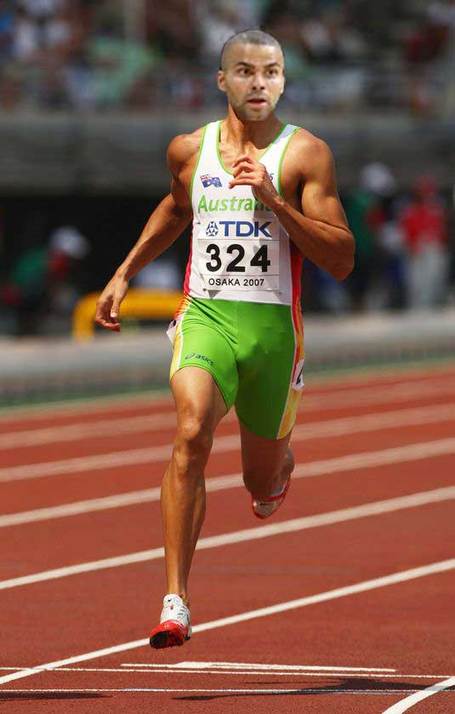 Another obvious choice. I guess you can add FinDog here, too. Now, if only Money Mase can find that bullseye more often... 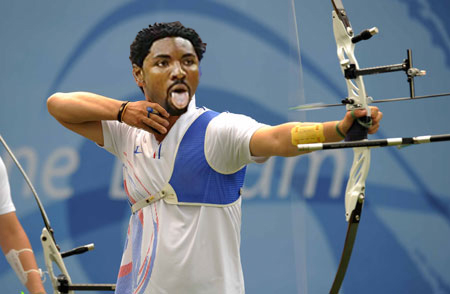 Mason with the swag. Or the wag. Tongue-wag. 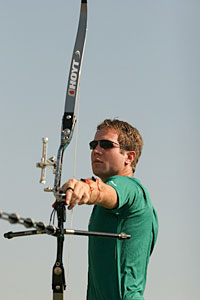 This photo has not been tampered for purposes of realism.

Horrible 'chop, I know. Tim could've been a pro swimmer in the mold of Ian Thorpe or Michael Phelps if the ghost of James Naismith didn't come calling carrying a peach basket. I chose the butterfly event for Tim because he seems to pull off the hardest moves (like those low-post moves requiring tough, tough footwork) with a lot of grace and ease. Dare I say it? He's just too fundamentally sound in just about everything. 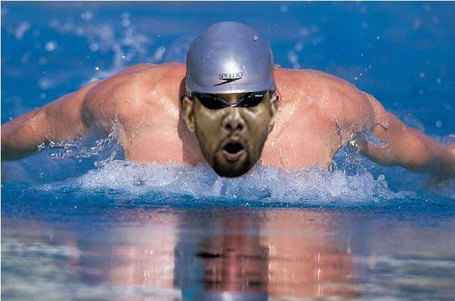 Albatross has long limbs, and I'm no expert here, but I'm thinking that wingspan and body type will contribute to good form when diving. He could be a gymnast, too, given that sport's propensity for fielding extremely young kids, but there's always something alluring about a Greg Louganis-type athlete. Not the gay part, of course, not that there's anything wrong with that. (copyright: Hipuks) 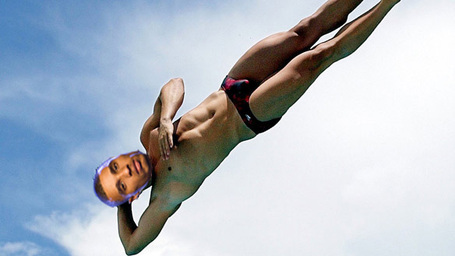 I'm kinda iffy about this. The only criteria I considered was that in RJ's younger years, he can really jump. Of course, he can still dunk on anybody's head right now. I could've used the high-jumper photo but adding a pole out there makes for good effect, not to mention a perfect tool for an escape artist. 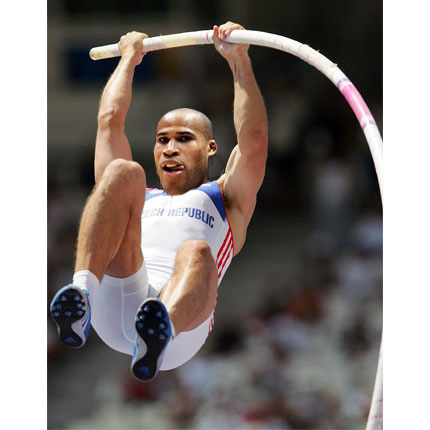 You might say that equestrian is soooo lame. Well let me tell you, it is not. Uh, I actually haven't tried it myself, but it feels that way. Look, you sit your azz on a jumping, bouncing horse who probably wants to tip you over your back so bad, and then both of you circle a dizzyingly difficult track, and you tell me that's lame? Get outta here. Plus, the sport is quite esteemed, and seeing the venerable and respected veteran that Dice is, I put him on his proper horse, or uh, perch. 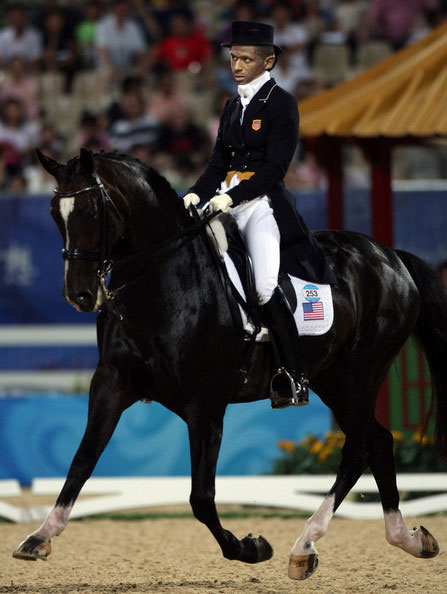 "Stupid davis... putting me in this outfit and donkey."

This is seriously up for debate, except that my mind right now just thinks Yawn is a foul-machine. Judo is a physical sport that involves throwing your opponent, and if Ian fouls the next time, I want him to foul the opponent hard - yes, judo throw him if need be. We need someone to remind Pau Gasol how marshmallow-dipped-in-hair soft he is. You can also consider the tat-covered, bar room brawl-loving Marcus Haislip for this particular sport. Oh, and Blair is more than qualified as he is a certified judoka. 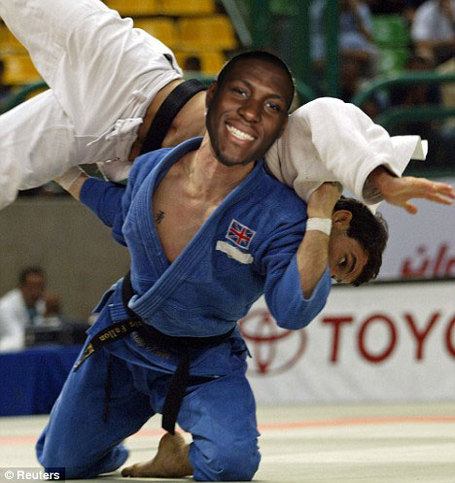 Rebounding is dirty work, and we need someone to do the heavy lifting for us. Enter Heavy D in this gawdawful 'chop job, and your rebounding woes are begone. Just like it was miracle whipped or 2nd round picked. 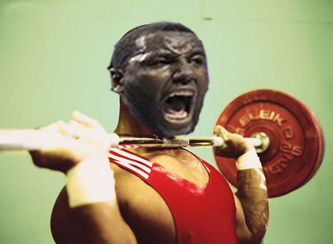 Forgive me if this sounds so gay (again, not that there's anything wrong with that), but this is the first thing that came to mind when comparing Manu to other Olympic sports. And I love watching synch swimming, so I can't argue with that. First, the intensity: 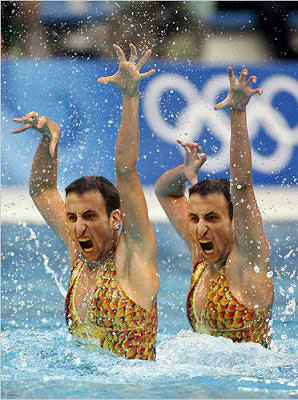 Hear him roar... in a swimsuit, this time.

Of course, synchronized swimming also requires the proper amount of grace and beauty, not to mention projecting that megawatt smile in front of the judges, which I think is the X-factor for every great synchronized swimmer. Looks like Manu has that in check, too: 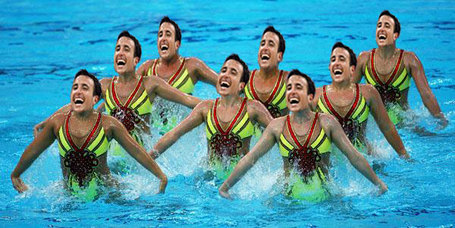 Too many Ginobilis is making my head explode.

I realize I don't have anything for Gregg Popovich yet (and some others, for that matter). Maybe he can be one of those Olympic judges who seem to purposefully screw some athletes out of a rightful medal. Or better, he can be the sadistic coach torturing those little Chinese gymnast kids. Alright, enough of this crazy Olympic nonsense. An honest-to-greatness preview and your game thread is up next.

Olympiacos.org: The Greek team's official website. This is the english version, of course.

Slam and Freaknick's Euroleague Adventures: Pretty funny name for a blog, but these guys do a good job of monitoring especially NBA players who jump ship to another continent. Oh, and they think that tonight's game is going to be George Mikan-esque old school, which is nice if you're a Spurs fan, but boring if you're a useless, idiotic prick.

The Hoop Doctors: Olympiacos almost got Allen Iverson. Good lord, the owners of this team are filthy rich.

Euroleague.net: Send your fanmail to Greece's "Baby Shaq", Sofoklis Schortsanitis. My question would go like this: Do you think you can beat The Real Shaq in an eating contest?

48 Minutes of Hell: Do yourself a favor and head on over to Tim and Graydon's space. They always have some unbelievable stuff going on there.

Project Spurs: This is a pretty slick fan blog, and they usually have good content about the Spurs.

SpursTalk: They echo my opinion of tonight's destruction derby.

Manu Ginobili @manuginobili - Thank y'all 4 showing the team & me so much love & support yesterday! It was great!. We r gonna have a fun season!

Dejuan Blair @DeJuan45 - I want to thank everyone for all the love you gave me tonight!

Highlights from the previous preseason game against Houston, and a slew of postgame videos, for your viewing pleasure. Because PtR now gets awesome support from Spurs.com, I'll be using their videos instead of youtube. I would especially recommend Pop's interview, another classic. There are parts in between questions, when everything goes silent and he shoots the reporters a look of disbelief, like he's been charged with a heinous crime. Plus, he calls George his favorite player, "in the day and in the night." He also beams about Bonner's increased willingness to get rid of the rock quickly. Way to show your trust in the guy, Pop.

No news yet if there's going to be a worldwide broadcast or whatever. The NBA sure does know how to make its fans excited, or maybe outraged.

Please don't post links to illegal game feeds in this thread. Links to illegal feeds are not permitted on SBNation, but you can probably find them out there on the internets if you're resourceful and desperate. In fact, nobody can stop you from googling "atdhe". Also, sending a love letter to dmenendez@gmail.com may provide an answer, courtesy of the FSM.