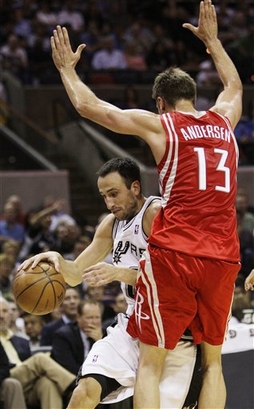 It's good to be back. Well, not really completely back as it's just a preseason game, but boy, does it feel great to watch our San Antonio Spurs back in action.

In tonight's game, we were treated to some things cool and neat, and one that was truly special. Let's count our early blessings, after the jump.

Similar to a lot of people in the game thread, I didn't get to see the goodness in all their living, playing, sweaty glory, so let me just count the ways how I both loved and hated this game. Yes, we all deserve to be giddy, but that doesn't mean we can't be Pop-type cranky about some things.

Loving you is easy 'cause you're beautiful

Yeah, I'm totally ripping out a line from a cheesy as hell song that runs the risk of me getting crucified in this webspace. But what's not to love about these things?

DeJuan Blair - What can I say? He's a beast. An epic, legendary debut not seen since, well, maybe Timmeh's days. The stat line: 16 points, 19 rebounds (8 offensive!) with 2 assists and 1 steal to boot in only 22 minutes. The 6-15 shooting was skewed with several missed tip-ins to the basket, so forgive the young stud.

Manu Ginobili - I don't care what you did out there. Your three-point stroke made me swoon. Your ball-handling made me quack in my boots. Seeing you run pain-free out there made me believe in true love again. Welcome back.

Malik Hairston - 10 points, 5 rebounds, and was part of the team that led the charge during the 3rd. Good case to make not only to be kept in the team, but also to be given meaningful minutes.

Matty Bonner - Pressure-free Matty is a dead-eye shooting redhead. 14 points, 4-7 on threes and kept us afloat early in the game.

Just be thankful it's the first game of the preseason 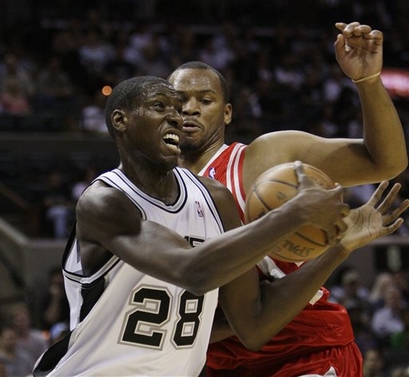 Here's looking at you, Triple Bumbler.

Because plainly, you didn't do well. A few sucked, and some were so-so. The all-knowing Pop is watching. But relax, kids. Just let the game come to you, as a lot of coaches like to say.

Ian Mahinmi - He was getting a lot of flak from the Houston radio announcer, even calling Yawn a foul-machine. He did show some activity, but maybe too much energy got the best of him. Keep your head up high, young steed.

Marcus Haislip - My boy had a good start, but tried to force the action later on. I think he let the early success get into his game too much, thinking he can dominate. Also, Scola ate his lunch in several possessions. Lots to learn still, but good to see he got some minutes.

Keith Bogans - I know that the JV's seat is vacant as it currently stands, but please. Let's leave it empty, Keith, mmmkay?

Semi-blowout loss - We were at home. The comeback was nice, but man, we can't get pasted like that even without our usual stars and vets. Luckily, it's just the preseason and we know the Spurs couldn't care less about winning in no-bearing games. But still... can we win for us fans, pretty please, Pop?

[Addendum] Channels to watch the game - LatinD will call me out on this, but I noticed people were really pissed about having a hard time "finding ways" to watch the game, and some weren't even able to watch at all. (me! me! me!) I say let's turn that frustration to a positive - I know everyone's excited, but I hope we won't let this lack of viewing opportunity dampen our spirits and instead, fire us up even more when the real season begins. For now, some of us might have to endure just using the audio feeds and the new and improved Yahoo boxscore (or NBA.com and ESPN's boxscores). At least they're a thousand times better than the WNBA's. Email dmenendez@gmail.com if you need further counsel on the matter.

Anybody who wants to do a more comprehensive recap is most welcome. For now, savor the highlights, Spurs fans. DeJuan Blair is here to stay, and stay and destroy oppenents, he will. Next up: Olympiacos with Josh Childress and PtR playoff favorite Linas Kleiza in tow.

Oh, and some Greek guy named Iannis Bouroussis is gonna be there, too. Memo to DeJuan: time to feed, my little pretty.

*PS. Thanks to all those who participated. To those who weren't there - we missed you, but DeJuan made us forget you for awhile.