This Week in San Antonio Spurs Basketball: The "It Has Begun" Edition

Share All sharing options for: This Week in San Antonio Spurs Basketball: The "It Has Begun" Edition

Welcome back, Spurs... it's been too long.

Training camp also opened this week, so TWSS is going to be heavy on that this week. The Spurs also have 3 - count 'em, three - games on the preseason schedule this week:

Here's jrw's pick. Sometimes I worry about him :-P

"He's Manu. He's Back" | Spurs Dynasty
Short, sweet, and a good indicator of how we all feel about the return of Manu

Spurs Basketball: The other new Spurs...
Robby Lim talks about some of the less famous new names on the roster.

Spurs can't wait to see Ratliff at the rim | Express-News
"Ratliff was an under-the-radar acquisition for the Spurs this offseason. Yet if Ratliff has just a few more blocked shots left in his 36-year-old hands, he will have earned every cent the Spurs spent to get him."

Spurs evolve into Tony's team | Express-News
"By every statistical measure, Tony Parker enjoyed the finest season of his career in 2008-09. He didn't enjoy any of it."

The Other Other New Guy | 48 Minutes of Hell
Graydon talks about quite possibly the most underrated move the Spurs made this summer.

Are the Spurs Tony Parker’s Team? | 48 Minutes of Hell
It's the quarterback controversy that never happened. Increasingly, the San Antonio Spurs offhandedly refer to Tony Parker as their leading playmaker.

Popovich, Parker, and Spurs Point Guards | 48 Minutes of Hell
Tim Varner explores the options the Spurs have in George Hill and Marcus Williams.

Spurs Cracked Open Their Championship Window But For How Long? | Project Spurs
David Thiessen asks a question on a lot of minds.

An Ode to Gregg Popovich - Pounding The Rock
We love our coach, and here's why.

Jane Austen Critiques: The NBA Coaches Edition - Pounding The Rock
What would Jane Austen think of current NBA coaches? A humorous look at the NBA through the eyes of the British novelist.

Is Age a Problem for the Spurs? - Pounding The Rock
Is age a bad thing in the NBA? No, not so much.

Poll: Battier/Bell/Lee/Jackson - Pounding The Rock
dfjmed asks: who would be the best fit?

For those of us seeking entertainment till the start of the season - Pounding The Rock
KA1Z3R loves going off topic, and we love him for it.

With Duncan and Ginobili Healthy, the Spurs are ready - Pounding The Rock
Robby Lim shares one of his blog posts with us.

Watchoo talking 'bout Willis? - Pounding The Rock
Hipuks adopted a dog, and talks about it as only Hipuks can.

Slam Dunk, the Manga - Pounding The Rock
A fan's review on a manga that every basketball fan should read.

The New Look Mavs Are Getting Defensive - Mavs Moneyball
"The 2009-10 Dallas Mavericks look to climb the standings and make another push towards that ever elusive championship." Looks like they plan to do it by playing better defense, but I'm not sold.

Division Matchup Preseason Preview: The Spurs - Mavs Moneyball
The Southwest Division is one of the strongest in the NBA. Preseason preview an in depth look at the Spurs, from the Mavericks perspective. Mavs Moneyball was empty and dead for months, and this is what they come back with?

Battier pulls muscle, out for a week - The Dream Shake
Our first preseason game just got easier.

Phoenix Suns Seek Marginal Defensive Improvement - Bright Side Of The Sun
The Phoenix Suns seek to improve defensively but realize they can only get so much better. They feel an "average" defense combined with their offense will make them competitive in the Western Conference.

Suns 2009-10 Season Preview Part II: Assessing the Offseason - Bright Side Of The Sun
In part 2 of our 5 post preview series, I review the off-season moves of the Phoenix Suns. Although the Suns have lost ground to the elite teams, the front office had a very successful off-season. ZonaFlash explains how.

Wallace or Perkins: Who Starts? - CelticsBlog
A debate on whether Rasheed Wallace or Kendrick Perkins should start for Boston.

New Camp = New Guys = Added Dimensions - Welcome to Loud City
A look at the myriad of weapons the Thunder have to throw out there this season.

Mr Pappagiorgio Returns to WTLC - Welcome to Loud City
Mr. P spent the offseason doing the same thing I've tried to do for the last couple of months... except more successfully.

Will Fever’s Attention to Detail Help them Maintain Momentum in High-Octane WNBA Finals? - Swish Appeal
With their 93-84 victory in Game 2 last night, the Indiana Fever demonstrated that the critics' one-dimensional analyses of their game fail to explain why they have taken ownership of home court advantage in the WNBA Finals – it’s their attention to multiple facets of the game that makes this team successful.

Philadelphia 76ers Preview 2009-2010 - Liberty Ballers
An in-depth preview of the Philadelphia Sixers 2009-2010 season. Pretty optimistic, but we can't blame them for that.

The Evolution of the NBA - Blog a Bull
A look at the changes that have taken place is the NBA over the last 20 years. h/t to LatinD for finding this one.

NBA says 'No Handshakes' - Fear The Sword
No Handshake For You - if you're in the NBA, at least.

Where to go with Joe Johnson not signing an extension - Peachtree Hoops
A look at the possible reasons behind Joe Johnson chose free agency in 2010 than to sign a contract extension with the Hawks.

Pacers Playing Time And Rotations All Up For Grabs - Indy Cornrows
Defense will determine how the playing time and rotations shake out for the Indiana Pacers.

Something is wrong - Bullets Forever
Nothing is obviously wrong, so something must be wrong? Yep, it's a Wizards blog.

A Small, Good Thing - Sactown Royalty
On the small steps of progress to look for in Sacramento and the world.

Give Me Your Hungry, Your Eager, Your In-Search-Of-A-Roster-Spot - Canis Hoopus
Wolves camp invitees have a shot at making the roster with up to 3 spots open. Jack McClinton included.

The 10 best point guards of the last decade - Yahoo|BDL
Arenas over Tony... wow.

The 10 best shooting guards of the last decade - Yahoo|BDL
Manu is dissed again. This is the season to make the doubters STFU.

The top 10 small forwards of the last decade - Yahoo|BDL
I guess RJ's ranking "makes up" for dissing Manu?

The 10 best centers of the last decade - Yahoo|BDL
Timmeh! Although I still feel like this is the wrong list for him to be on.

Wayne Winston: Mark Cuban's Stats Expert Isn't Bashful, Part 3 - TrueHoop By Henry Abbott - ESPN
Wayne Winston is a professor at Indiana University and for the last nine years he has been Mark Cuban's stat guru for the Dallas Mavericks. He also seems a bit on the crazy side, which explains how he can work for Cubes.

Forum Blue And Gold | Second Verse, Same as the First
A look at the Lakers' second unit.

Queen City Hoops - Bobcats want to (and need to?) run
"The Charlotte Bobcats' stated desire to run more is about how the roster evolved."

Where did Derrick Rose’s passes go? | By The Horns
An interesting look at the Bulls' offense.

A Worn Plotline | The Two Man Game
A view of the ref lockout situation.

Colangelo Compares Turkoglu To Nash | Hoops Addict
Hmmmm... I don't know about that.

Is a Championship Parade in the Future of Cleveland? | Wages of Wins Journal
Let's just hope this is wrong, which is quite possible.

Look at Wayne wandering around after each interview.

Speaking of Wayne, how about his interview with George Hill?(pictured below).

Here's a Manu mix from Chasky:

These are all from Spurs.com:

Many, many more video player interviews(including a couple more with Manu) can be found here. 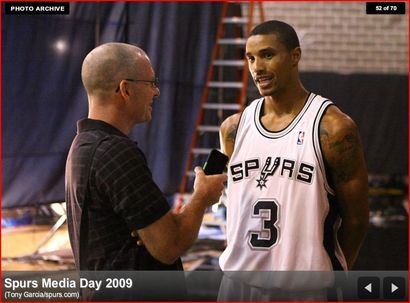 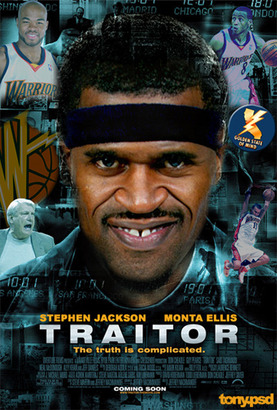 via Golden State of Mind 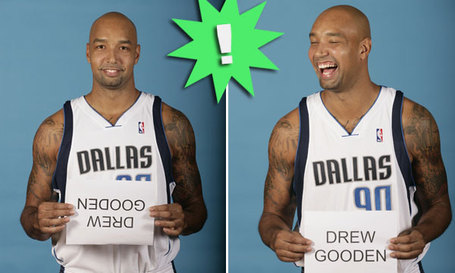 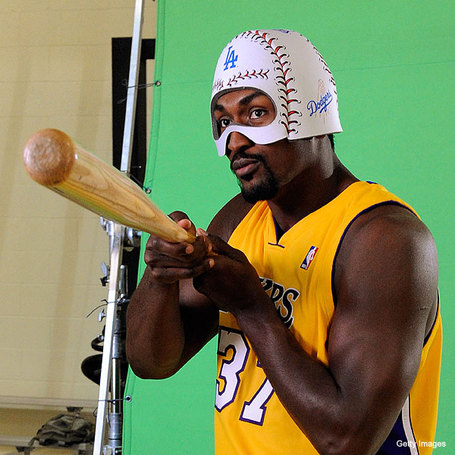 Don't ask me questions I already answered, I feel the same way I felt last time. Y'all know I got fined, so don't ask me the questions if you don't want me to get fined. Kobe (Bryant) said the same thing two years ago and didn't get a fine, but we're not going to beat a dead horse. They know they're wrong. But I can't beat the NBA so I've got to roll with it.

- Stephen Jackson, proving he's still the guy who went in to the stands in Detroit. Speaking of which:

And now, RC Buford on getting Manu a new contract:

It could happen during the season, or it might happen after. We'll just have to see.

And then there's Antonio McDyess on being a Spur:

There have been years when I’ve been trying to come here before, but they turned me down. I feel privileged to be here.

Well, that's it for now, folks. We have a busy week ahead, so check the site often. :)