Today was the open practice and scrimmage at the AT&T center. It was also host to some additional events. I was there for a rookie season ticket holder event. When Holt went all in, I felt like I should as well. I'm a diehard sports and Spurs fan, and I'm lucky enough to work in the city where I was born and my favorite pro team plays. The seats might fit my budget better in the future, but I'd regret it forever if I missed seeing Duncan, Manu, Parker, and this championship calibur team our FO has assembled play.

This post is about my experiences today and some random observations/recap about the game.

Note: My camera is relatively new and I haven't used it much. We took 150 pictures today, but most of them are incredibly bad quality. I figure it is better to show you bad quality pics than no pics at all though.

We arrived at 12:00 for a photo opportunity with the 4 championship trophies. They basically had them on a fold out table and you got to stand behind them. They printed a 5x7 for you right there. 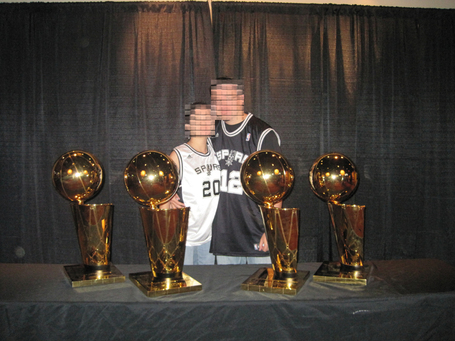 My company for the day and owner's of one of the 4 seats in my group. I don't know if they want me posting their faces all over PTR so they have been mosaic'ed. It was their wedding anniversary too.

At 12:15, they provided us with Pizza Hut pizza and drinks as we awaited a mysterious FO speaker. Out comes R.C. Some highlights that I can remember from his speech:

- The Spurs organization thought that if Manu was healthy in 2008, we were a top contender competing for a chip.
- The fate of our team this season is all on the health of Tony, Tim, and Manu.
- Bonner has had an awesome week in camp and he hopes it will continue to the regular season. He then knocked on wood which drew a pretty good laugh.
- He said RJ was a player they have wanted since playing against him in 2003. They always thought he was an organizational/chemistry fit.
- Tony will see a reduced role in the scrimmage because he played with the French National team. It seemed like he played a ton to me though.
- He made everyone over 20 raise their hands. Then, he asked everyone under 20 to raise their hands. He then said, "look at those people and that is Blair." They don't know what to expect from him this year since he is young. He also brought up that he was raised a stone's throw (my words) from Pitt and it is a big deal for him to be moving so far to Texas.

Terrible quality. The room was really dark too.

-I asked him if RJ was consulted before Bogans was picked up since they had played together last season. He said he was sure Pop had asked him a question or two.
-Someone asked him to comment on Blair's health. He said he has never had any problem with his non-ACL'd knees. He expects him to have a shortened career, but at 20 years old, they aren't really concerned with that now.
-Someone asked when we would hear about Manu's extension and he gave the typical wait and see answer. He commented that Manu was obviously important though.

Next, they introduced us to our ticket service representatives and held a raffle. I didn't win, but prizes included:

They then told us we had reserved sections to sit for the game and to fill the sections. We sat right at half court and probably 10 rows or so up. It was amazing. So Pop came out and said the players would go through drills for 15 minutes and then scrimmage. He told the crowd to feel free to have fun and make as much noise as we felt like. The Spurs did some running drills and then some offensive set drills moving the basketball. They finished with some defensive drills where they would trap the guy with the ball and force him to another man off the dribble. It was neat to see.

Someone posted that they thought Finley looked cut from the training camp videos. I've never seen any of these players this close before so I don't really have any comparison, but most of the players looked really cut. Theo Ratliff was very reminiscent of Kevin Willis to me. His arms were super muscular. I think he is using his own stash of Youngevity. George Hill is the leanest guard I've ever seen. I'd be shocked if you told me he even had a body fat percentage. Marcus Williams is really lanky. He is as tall as the forwards but his arms are probably the skinniest on the whole roster. From one of my pictures, he looks like he has an inch or two on Blair. Bogans, Blair, Hill, Haislip, Ratliff, and Dice all have crazy wingspans. Bogans wingspan was really impressive to me because I'm not that familiar with him so it was kind of unexpected. 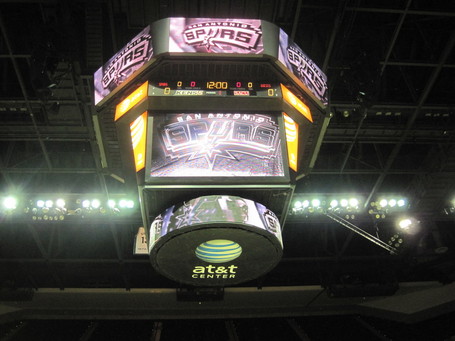 Then, the scrimmage. It was Spurs in black versus Guests in white. 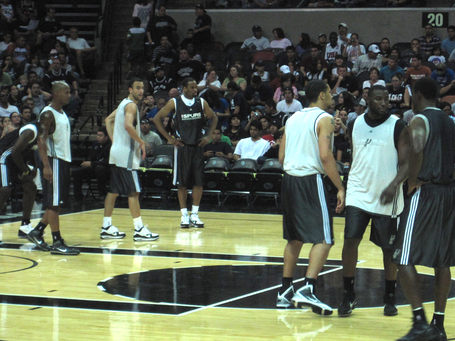 Spurs won 76-74. I was rooting for Guests. That seems right for a score the Spurs would finish with if they played themselves and dictated the pace on both ends. I'm a terrible judge of basketball talent, and I completely understand ATS's feeling to do microscopes at summer league now. When you want to learn something from a game, it is incredibly hard to pick up things amid the fray. You really have to focus on a player. I lack this focus. Luckily, for me (and in turn, you), the Spurs streamed the game and fellow PTR'ers posted some key plays and their general feelings. See here. Anyways, here are some key plays and some of my general feelings from the game.

-Jerrells will be a useful asset to the Toros. That isn't a slight either. I was really impressed with his ability to finish.
-On the offensive end, Marcus Williams really impressed me. I really liked seeing him run the offense and I hope he is our 15th man. I didn't really care before today.
-Manu ran the point a lot while on the court with Hill. I told my friend I liked it, and he said it seemed very "natural." That is the best way to describe it. They were really effective together.
-RJ seemed to miss everything. It was annoying. He looked good on defense though.
-Malik Hairston had a really awesome dunk.
-Ratliff had a really good block on Duncan, and they called a foul. I didn't see a foul.
-Duncan passed to a ref who dodged it as it flew out of bounds. The crowd cheered as if to reassure Duncan it was okay. It was a funny moment.
-Manu got a open drive in transition and dunked it. The crowd went absolutely crazy. The ankle looked good.
-Parker looked more or less like Parker. He drove and finished in the paint when it looked over. There was one play where Hill blocked him and Parker got the block and put it back up. He is just so fast.
-We didn't give up a lot in transition with either roster.
-Blair looked really good. He had two really nice post moves that made my jaw drop. On one of them, he drove under the basket on the baseline. I mean as far behind the basket as you can be. He then used his strength to muscle his way directly under the basket and then used his wingspan to put the ball around a defender and up to the hoop. He needs to learn when to give up on the offensive board and get back on D though.
-Bonner looked good. He had an and 1 on a three point make. He also had two good drives and finishes in the paint.
-Duncan missed a Duncan-shot. It was disappointing.
-Bogans and Hairston both looked good on D.
-I didn't notice Haislip much. He had a 2 minute stretch where he took every shot for his team and then I don't remember much of anything.
-George Hill looked comfortable calling plays. His shot looks really good, and yes, he made a beyond half court shot at the end of the half. 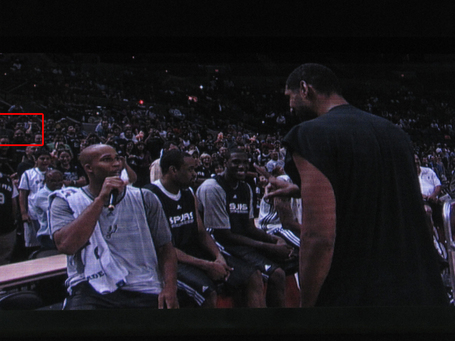 RJ getting Duncan to participate. The picture is taken off of the Jumbotron because we were looking at RJ's back. You can see us in that red box.

Finally, they did a three point contest hosted by RJ. Mason was set to go last but the crowd got Duncan to go. Duncan won. Finley should have won it easily, but every shot was in and then came out. Bonner took the mic to thank everyone for coming and to say it was going to be a great season, but the crowd got really wild for Manu to shoot 3's. I don't know if the Spurs understood though. Duncan went over to Bonner and took the mic from him and gave it to Manu. Manu asked what he was supposed to say. Some people in the crowd yelled for him to shoot, but he just said he would say what Bonner said in Spanish. Bonner would say a short sentence, Manu would say it in Spanish, and everyone would cheer like crazy. On the way out, we received a Manu bobble head per season ticket holder group. That was my day. Below is a picture for anyone who hasn't been to the AT&T Center of the rafters we should be talking about a lot this season. 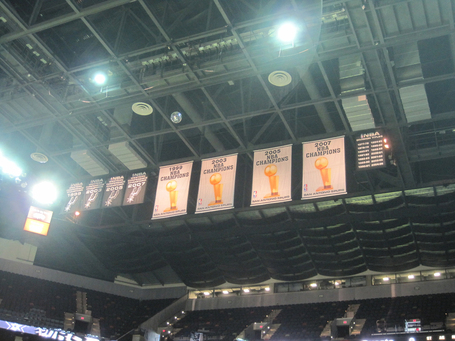 Additional note: George Gervin sat front row and talked with Pop for awhile during the game. Assistant coaches coached the two teams and Pop just kind of wandered around.