Share All sharing options for: Spurs @ Bulls: Stat of the Game, 5

5, as in 5 stats that point to why the Spurs lost last night. Know this going in, I'm writing from the perspective of a Spurs' homer. (I know, it's a real stretch.)

In descending order, from least to most impactful.

5.) 57
As in the officials made 57 horrific calls last night. Now, this number may not be exact, but I feel I am in the ballpark. It is nearly impossible to stage a comeback when the officials are clearly wanting the game to end as quickly as possible so they can go to their locker room and eat pizza and drink free beer, (at least, that is what Donaghy would have us believe.) One non-call that stands out in my mind occurred deep in the fourth when the Spurs were attempting to come back. Miller caught the ball at the freethrow line, gave a pump-fake, and walked to the rim. He clearly not only changed his pivot foot, but took an extra step before his first dribble. The whistle was not blown and he scored to extend the lead back to 11.

4.) 8, 3, & 3
Tony Parker's points, assists and turnovers. in 35 minutes of action. I mean, ouch. When our point guard plays this poorly, there is little that the team can do to overcome it. The point guard is the quarterback of the team. His play was equivalent to a Jake Delhomme performance. I mean, if we translated his line into football terms, I'm thinking 2 interceptions, 1 fumble and 0 TDs with a 35% completion rate. Looking at it, that may be more of a Jamarcus Russell line, but either way, you get the idea.

3.) 28 & 16
If Tim is forced to score 28 points and snag 16 rebounds, odds are his teammates forgot to show up. Tim should average around 15 and 8 this season. Not because he has declined significantly, but because the Spurs possess five former, or current, allstars and Jefferson, who was snubbed several times over his career. (Duncan, Parker, Ginobili, McDyess, and Finley.) Duncan should not have to carry a team this talented on his back, and when it happens, we probably will not fair well.

2.) 15 to 8
The Spurs were out-rebounded on the offensive glass 15 to 8. Giving a team like Chicago that many extra possessions is deadly. The Bulls are a young team that feed off of things like offensive rebounds and turnovers. They like to get out and run because they are extremely untamed and their half-court offense is greatly based off of difficult mid-range jumpers, in other words it sucks. 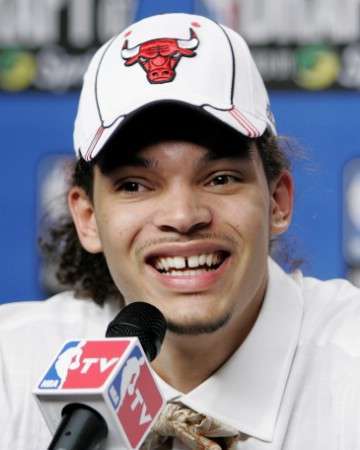 1.) 15
This is another rough estimate, but 15 as in the 15 awful lineups that Pop threw onto the court. I mean, awful like Noahs' disgusting face awful, (see above.) This is my personal opinion, but was it just me or did everyone else notice that Pop's lineups were staggeringly awful. I mean, if we are up by 20 against the Hornets at home, then feel free to throw in your ridiculous lineups, Pop. But if we are down 15 with 8 to go in the fourth, how about you play our best 5 players and quit messing around? All I wanted to see in the fourth was Parker, Ginobili, RJ, McDyess, and Duncan. I realize it's the second game of a back to back, but no one played extended minutes against the Hornets because they sucked. So why not try to win the game? Why not? Throw our best guys out there and if they do not make a push, then throw in the towel. But at least give us a chance. Pop's job is to put the team in the best position to win. I feel he failed in that regard last night. I realize he does not care about the regular season, but come on, man. Alright, I am done ranting, for now.