Share All sharing options for: This Week in San Antonio Spurs Basketball: Friday Drown Your Basketball Sorrow Through Links Edition

Tell me, how does that concrete floor taste? Thankfully, the weekend is a time that can help us forget that oh-so-painful first loss. Also, Friday TWSS's are not about the Spurs (but more about our friendly neighborhood SB Nation blogs, hoops, and other off-topic stuff), so relax. Hop on in if you're not doing much during the weekend. Oh, and don't forget to bring your drink, too. I have my 1993 Zilliken Saarburger Rausch Spätlese keeping me company.

From the complicated but brillian mind of jollyrogerwilco:

Here's from a band that Wayne and xman have been raving about. I like them, too, so here's a killer acoustic version of my favorite song from the Yeah Yeah Yeahs. (You can listen to the original one here)

From Tim C. and his Southpark mind:

Here's one more for the road.

Liberty Ballers: The Magic are good, the Sixers are not; final score: a lot to a little
Destruction.

Rufus on Fire: The Prediction Thread
It's tough to do predictions when your team is losing.

Brew Hoop: It's official: Andrew Bogut doesn't own a Ferrari
Cedarpark might like this, in light of the Antoine Walker bankruptcy.

Blog a Bull: BaB official (and a couple days late) Eastern Conference predictions
The guys at BaB like their playoff chances a bit. The championship odds? Not so much. Hey, at least they're honest.

Blog a Bull: Sam Smith: Lay off VDN for saying Bulls have no Title shot
Sam Smith, who wrote The Jordan Rules if any of you can remember, backs up Vinny Del Negro, saying Vinny is completely right in saying the Bulls have no championship shot this year. Yes, sometimes it's tough to keep it real.

CelticsBlog: Celtics improve to 2-0 after defensive clinic on Bobcats
Destruction #2.

CelticsBlog: Marc Spears: Celtics want money from Davis too?
Dissent in the Celtics' ranks this early. Yes!!! Okay, maybe not.

Peachtree Hoops: Joe Johnson, enough is enough
"... what the Hawks do or don't do with Joe Johnson this summer will decide the fate of the franchise for the next half decade. Either he is a must keep or a must go. He is either an overpaid albatross or must pay for backbone. You could go either way. I could too, and it does not matter."

Peachtree Hoops: 72 reasons to be excited about the Atlanta Hawks: #1 Piano music
The last in a 72-reason series. D'oh. It's cool though. I like piano music, too.

Peninsula is Mightier: Heat dominate Knicks on Opening/Tim Hardaway Night
I will always remember Tim H. for his killer crossover and Run TMC days. And oh yeah, that Knicks-Heat playoff brawl, too, from a few years ago.

Posting and Toasting: Danilo Gallinari is now on Twitter. Brace yourself.
Italian food is dee-lish.

Motown String Music: X-Rays on Richard Hamilton's Ankle are Negative
"Richard Hamilton injured his right ankle on Wednesday night, but x-rays were negative. He will be re-evaluated on Thursday."

Third Quarter Collapse: Orlando Magic 120, Philadelphia 76ers 106
This is some comprehensive recapping, and was put up in record time, too. These guys are machines. But I think I'll stick to being a hack, thank you.

Bullets Forever: Blair for RoY?
Think about this: teams could've had DeJuan Blair for the same price as Paul Davis. Paul who? Exactly.

Bullets Forever: Morning (afternoon) Briefing: We aren't the only ones impressed by the Wizards
Wiz fans believe that their team should be promoted to more than just a "Leftover".

Clips Nation: Playa Vista, Clippers October 27 - Griffin and Dunleavy talk about the Injury
"Six weeks until Griffin's debut." -- Poor Clips fans. But if it's any consolation, us Spurs fans probably know a thing or two about the words, "stress fracture."

Clips Nation: Clippers Club Optimism Special Report
How about a "Club Pessimism" in PtR to quell the bursting optimism? Applications for presidency are now being accepted.

Straight Outta Vancouver: Sky Hooked: Kareem to Join Memphis?
I only have this to say to the Grizz: No amount of Kareem coaching can stop the impending ThaBEATDOWN.

SLC Dunk: While You Were Sleeping... 29 October 2009
Even in the NBA, misery loves company. Especially on opening night.

Silver Screen and Roll: Doing Our Part: Previewing the Defending Champion Lakers
Yet another Laker preview. Their weaknesses? At the PG position and bench depth.

Denver Stiffs: It's your turn, Melo...
"There's only one path to an NBA Championship for our Denver Nuggets: Carmelo Anthony must play like a superstar every night." -- That, and avoid getting into trouble.

Bright Side Of The Sun: The Art Of A Beautiful Book Review
If you're planning to get the book, Phoenix Stan provides the sweet lowdown.

Ridiculous Upside: Waive Goodbye, Part 3
Marcus Williams riding the waive. Sorry, buddy. Still, you are a pretty good player and we wish you the best.

Golden State Of Mind: Macro-Warriornomics - WE BELIEVE WE SUCK :: GSoM's 2009-2010 Golden State Warriors Preview (Part 2 of 2)
These guys absolutely put in a lot of time with their previews. Really cool.

Blazersedge: Online Streaming Redux
Very nice that the Blazers have a legal AND cheap online stream service. As for us, we have the haves (League Pass-ers) and the have-nots (bottom feed-ers).

Blazersedge: Blazers Appear in Donaghy Book Excerpt
Disgraced referee Tim Donaghy is on a mission to screw the NBA.

Ball Don't Lie: Ex-NBA referee Tim Donaghy's wild book excerpts
"Donaghy throwing Dick Bavetta under the bus..." -- This is some scary shizz, just in time for Halloween. The Donaghy issue is still hanging like a black cloud over the entire league.

ESPN: Thorpe's 2010 NBA Rookie Rankings
This is on Insider, but just check out the FanShot provided by BlaseE. Blair at number 2! Huzzah!

MLive.com: Allen Iverson speaks out -- again (on willingness to accept coming off the bench)
What an ego. Seriously, I love AI's passion but to not take one for the betterment of the team is just pure selfishness.

FoxSports.com: Get ready for a wild ride - 2009-2010 NBA Season
"The storylines are tasty, but Randy Hill is here to pick out and deliver 10 with the most sizzle."

FOX Sports: Can anyone stop the Lakers?
Uncle Charley "Rosey" rifles through the legit contenders to the Lakers' throne.

FOX Sports: Shaq seeks to become deputy sheriff in Cleveland
Isn't it more like a Jester in the King's Court?

Rockets get to game at Golden State by boat
It worked. They beat the Warriors.

FOX Sports: Comparing Kobe and LeBron
If it wasn't for the nice Flash graphic that they made, I would've skipped this.

SI.com: NBA mulling options to prevent bad teams from tanking
"The proposal by Nuggets vice president Mark Warkentien, which was recently mailed to fellow team executives as well as to NBA headquarters, calls for a mini single-elimination postseason tournament in which the Nos. 8-15 teams in each conference would play up to three games in pursuit of the eighth and final spot in the playoffs."

Longoria, the village, to welcome Longoria, the TV star
Where fantasy meets reality. I don't know which is which.

Earth and Jupiter Captured In the Same Photograph Taken From Mars
"This is a photo of the Earth and its moon and Jupiter and its moons. In the same frame. It's taken from Mars, and it's humbling and incredible." -- True dat.

Unseen Sahara
These desert photos are just awesome. After viewing, go back to messing with Tim C. who lives in Phoenix.

If Paper Towels Could Talk...
.. it would be both awesome and freaky.

Not Martha: Meat Hand
Talk to the hand! Talk to ET! (not for the weak of heart)

The Photos of Walter Iooss
What beautiful photos! Seriously, check them out.

The Spurs FO need to sign these guys instead of cheerleaders.

Postgame interviews from Spurs vs. Hornets

The Highlights You Probably Don't Want To See

This week's AFTAD goes to Snaq. Here's a nice, yummy alfajor, Big Diesel, as our thank you for killing the Cavs. We're pretty sure he'll chow this one down in record fashion. 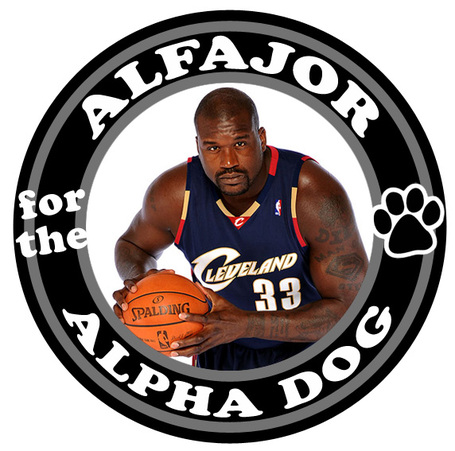 Okay, one elite team down, three more to go. 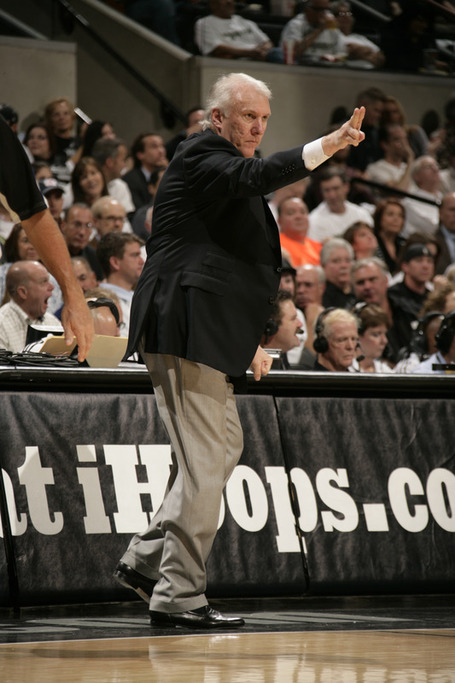 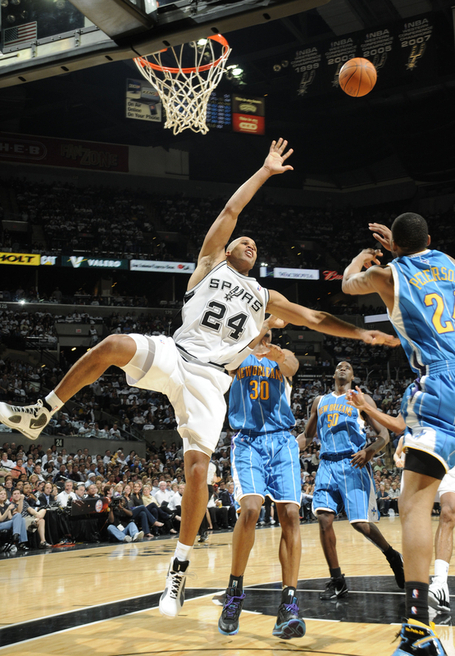 Do the Princess Peanut exercise. 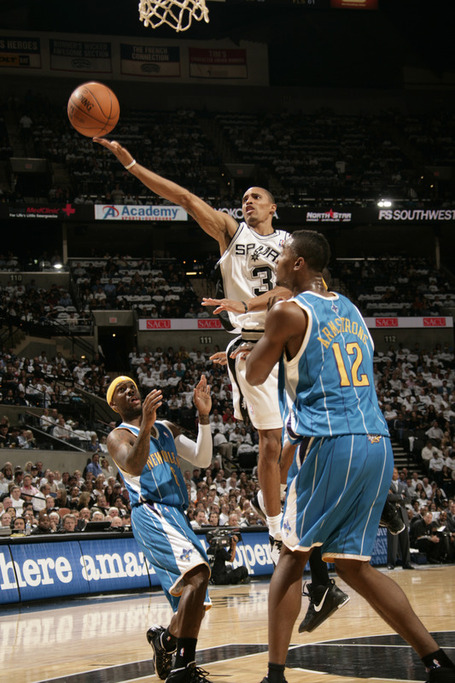 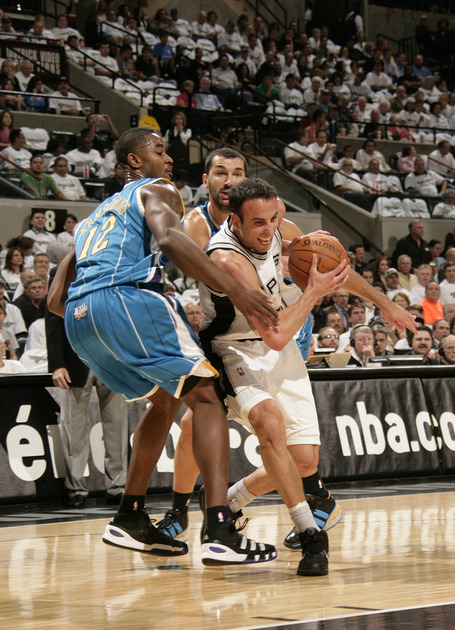 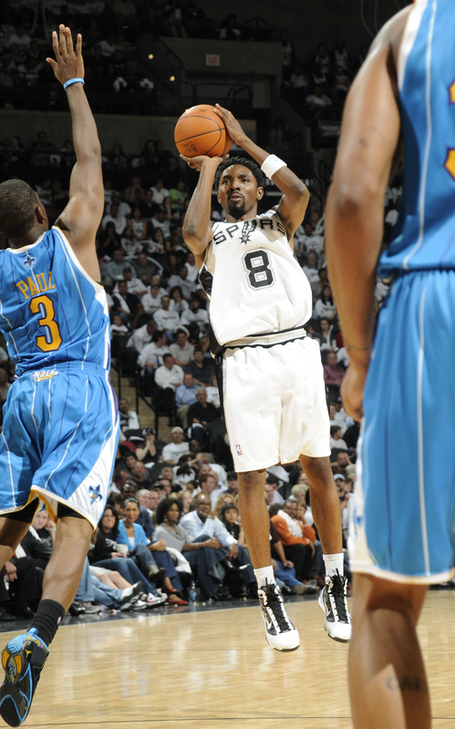 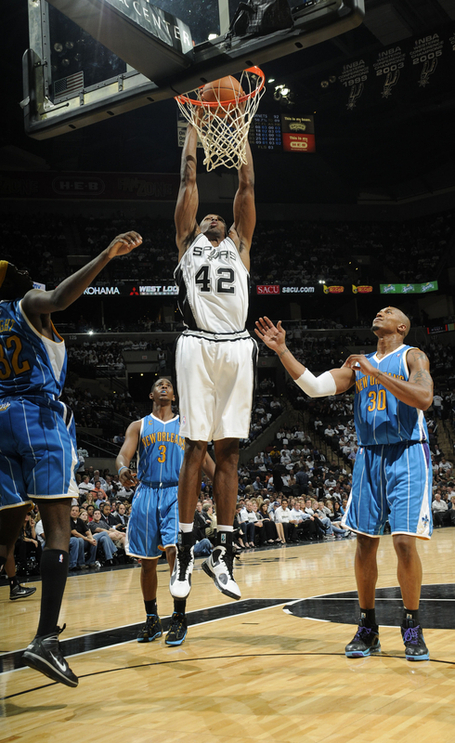 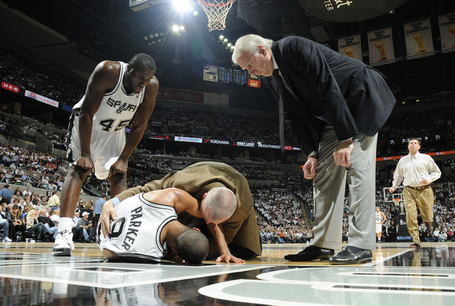 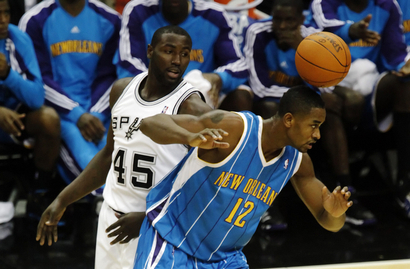 Trying to avoid having his arm ripped off, Armstrong attempts a rebound with his head. -- Hirschof 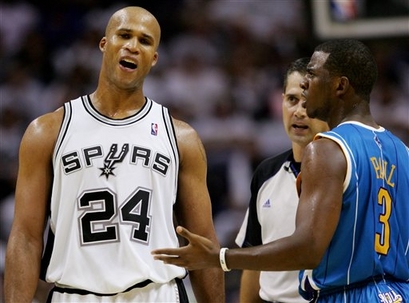 CP: "Seriously man, why did you leave her at the altar?" 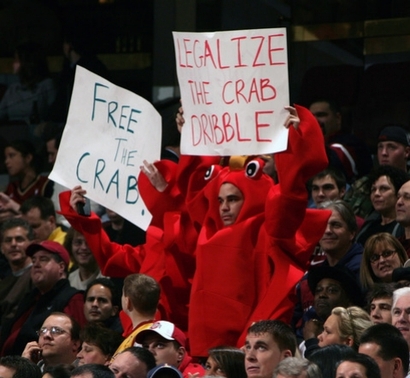 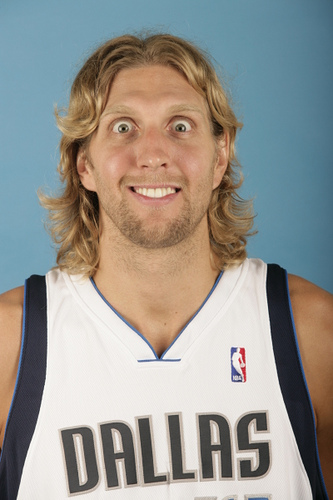 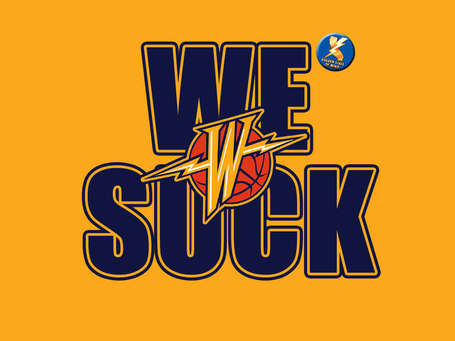 Thank you for letting us know. 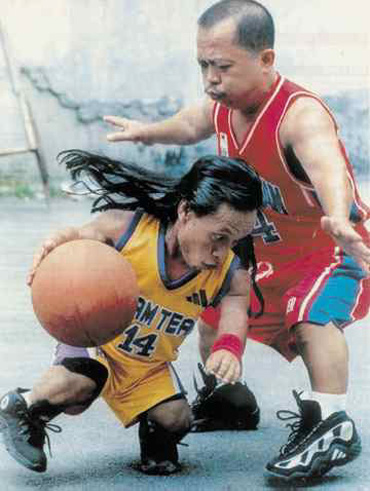 Ye of little faith. We will bounce back.

Some Blaaaaaiiiirrr photos from the game threads. 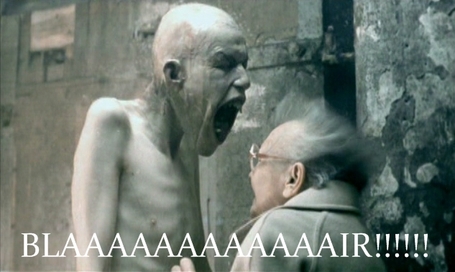 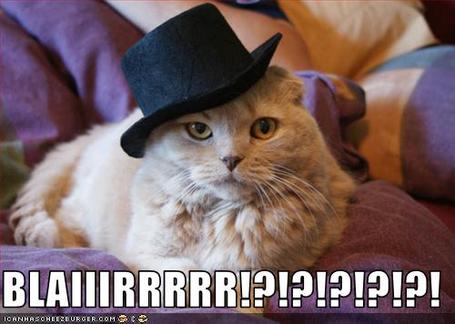 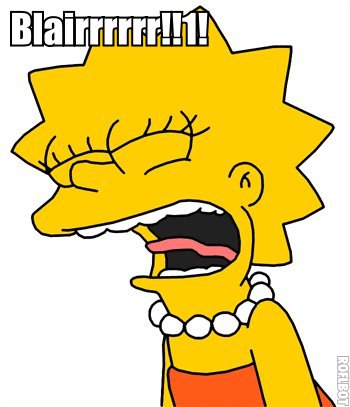 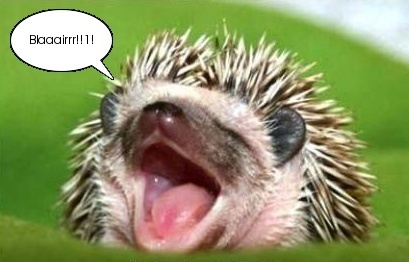 The Hornets are impressed

From Coach Byron Scott, on the most impressive area of play from the Spurs during the game:

I think it was their spacing. They keep Tim down there and they just play one in and four out. They do a really good job of just keeping their spacing and keeping their discipline on the perimeter. Guys are catching the ball and making their shots, and if they’re not making their shots, they’re looking to put the ball on the floor and create shots for the other team. They’re just a great team to watch and they’re going to be right there in the mix.

Those guys came in and looked like they‘ve been playing with each other for years. Of course, they‘re going to have to get a little bit more comfortable but McDyess hit some big shots. It‘s the same old Spurs, just different people in those uniforms.

The Spurs, humble and very committed as always.

I thought he was good. He’s suppose to be good. So, it’s not that big of a deal. It’s not like it’s a surprise. If he wasn’t good we’ll have big problems.

I learned a lot from going up against Chris Paul and committing some dumb fouls. I just have to get better and learn from it.

I think they call him "Da Beast". He has it all and does it all. He rebounds, scores and always is around the basket to get the ball or rebound. It’s like he has more than just one year of experience in the NBA. He is picking it up really fast.

It’s very important to win at home. It’s always good to get off to an early start in the season. I felt good on the floor tonight. I wasn’t trying to score a lot but just play my game and let it come to me.

That's it, I'm finished. The Kings are up next but just a friendly reminder: not too high, and not too low, either. Yes, that's exactly what she said. On Monday, TWSS will be back in all-Spurs all-day fashion. Ciao.