That Was Like Watching A Spurs Game, But More So

Well that was just all kinds of awesome. I'm not sure if it's possible to have more fun with clothes on than it will be to watch a Spurs game this season. In fact I won't make any promises whatsoever to be covered up from this point forward.

Could that game have gone any more according to script?

Well, Manu could've dunked on a couple of people. And I suppose Chris Paul could've been caught on camera openly weeping.

Outside of that though, a rousing standing ovation.

I don't have time for a lengthy review (I know, you're all crushed), but here's a quick player-by-player recap from what I observed, bleary-eyed, watching the game at one in the morning last night.

Timmy the Golden God: Amazing how studly of a rebounder he becomes - on both ends - when he doesn't have to worry about posting up and getting pounded on 60 times a night, huh? He's got that David Robinson in 1999 glow about him, doesn't he? He'll be there if you need him, but he could care less about shot attempts and his numbers. You get the feeling he wouldn't mind playing 25 minutes per game and watching the bench kick ass night after night. His post defense against Okafor was in typical Duncan early season form.

La Enfermedad: To paraphrase my all-time number one crush Sarah Silverman, "I love Manu and I don't care if it's not hip, I love him more than black people don't tip."

Holy Flying Spaghetti Monster, did I miss seeing Gino out on the floor.

Here's how freakin' good Manu Ginobili is: He probably made more mistakes, offensively and defensively, than any other Spur, and he still had a great night and almost singlehandedly changed the tone of the game the second he entered. The Spurs were down 10-4 after like six minutes, they were 2-of-10 from the floor and had allowed 5-of-10 to the Nooch, and then in the next 40 minutes they outscored them something like 8,418 to 12.

Obviously, it wasn't all Manu's doing, but I'm just sayin'.

The good: Was more aggressive going to the basket than I thought he'd be and had a couple of vintage drives in the fourth quarter, and his passing was as good as ever.

The bad: He probably forced two or three awful shots, he clanked three freebies, and he couldn't keep anyone in front of him on defense except for zombie Peja.

Still, 16 and 4 dimes in his first game back in forever, I'd say that's pretty flippin' sweet. 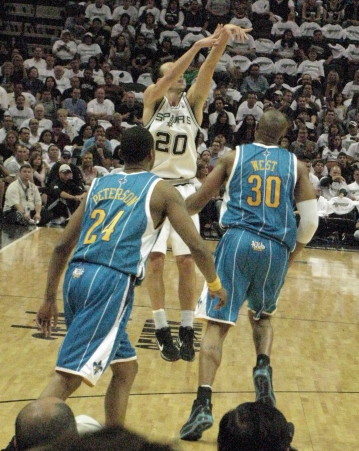 I was so impressed with Tony's game, I'm not even sure I can put it into words. It was blatantly obvious the Hornets came in with the game plan to not allow him into the lane in the first half. Parker recognized this immediately, didn't force the issue, and just gave the ball up and let the rhythm of the offense dictate who got the open shots.

Sure, the Spurs defense was forcing Paul to play that way, but you know who he looked like? Tony last year, handcuffed and without options, having to do everything himself. I would almost feel sorry for the guy if he wasn't such a punk.

Parker, meanwhile, was like a Jedi point guard. I'm not sure if I ever watched him play a whole game where he literally didn't force one bad shot. It's going to be fun watching him this year where he actually has talented people around him to pass to.

Of course, chuckleheads on TV will see he's averaging like 18 points this year instead of 22 and say he's having a down year.

The Runaway Groom: Not the best scoring debut, but I liked that after a cold start he understood he didn't have it and didn't try to jack his way back into a respectable box score.

Actually, I was quite impressed with Jefferson's overall game. He was a far better playmaker than I thought he was, pulled down some rebounds and defended fairly well, albeit against the crappy Hornets wings.

Old Man Dice: Played as advertised in the first half, moved well without the ball and cashed in on a couple of his high post jumpers. In the second half he saw that it was a rout and completely checked out mentally, allowing the fraudulent David West to score at will. McDyess is not a guy you want on the floor during blowouts anyway.

Rocket Quixote: Typical game we've grown to expect from Bonner. Thought he moved the ball pretty well and I liked his one pump fake and drive. His release looks even quicker this year. Really, he probably played West better than McDyess did, which is kinda scary.

Findog: Superb shooting night and he also passed well. Good passing is contagious, isn't it? Atrocious defensively as always. Wouldn't mind seeing less of him and more of Hairston, but that's wishful thinking.

PFP: Jesus on a boat was Hill good last night. I've been racking my brain for an hour, trying to figure out if he made a mistake all night. Seriously, this might have been the greatest combined 48 minutes Spurs point guards have ever played. No wonder Pop loves Hill so much. He defends like a demon, he can get to the basket, he shoots well and he readily passes it to Manu. What's not to love? Props to ATS for getting on that bandwagon from jump.

Not a Point Guard: I like the skinner Mason. Am I crazy or did his handle look much improved and he all of a sudden got quicker? Might actually drive to the basket a bit this year. I was pleased to see him score so well for having an off night from distance, which certainly didn't happen very often last year.

BEAST: Yeah Pop, you go ahead and shackle this guy to the bench. He's clearly not ready to contribute. You sit him and watch 19,000 people show up at your front door with pitchforks and torches. At this point I think the team needs Blair more than it needs Pop. Who's with me?

Pop: All joking aside, I'm glad that Pop was able to figure out who his ten best players are, when really I had my doubts he would so early. Of course an argument could be made for Hairston, or at least Bogans, over Findog, but there's a long season ahead for us to bitch, so right now I'll enjoy the win. Also, I like the idea of playing Manu the final last seven minutes of each quarter.

To be honest, I'm just grinning from ear to ear like a doofus. We're gonna do it again this year, I'm sure of it.

3. George Hill - He's my fourth favorite Spur, but my love is harder to win than Pop's.

2. Tony Parker - You know I'm in a great mood when I'm full on gushing about Tony.

PS: The Hornets are awful. I mean, as good as we played, we can't be THAT good. I think that team has three NBA players and nine scrubs right now. Am I wrong? (Then again, I said the same thing about us last year.).

PPS: I admit, as happy as the Spurs made me, the Toronto-Cleveland score was a close second. Shaq is ALREADY a disaster there. -25 last night. MINUS TWENTY-FIVE AGAINST A CENTER NAMED ANDREA!!!

Here's hoping for a Spurs-Raptors final.