Share All sharing options for: PtR Quick Cap: Spurs fall to the Indiana Grangers, 112-114 in the Preview-less Final Preseason Game

So much for this season's game preview team, going all Stern on PtR by not putting up a game preview. Hey, it's the preseason and Stern deserved at least one damn boycott, much like how he's been hiding these games from us.

And oh, we lost. Right. Let's dive in and discuss that, then. 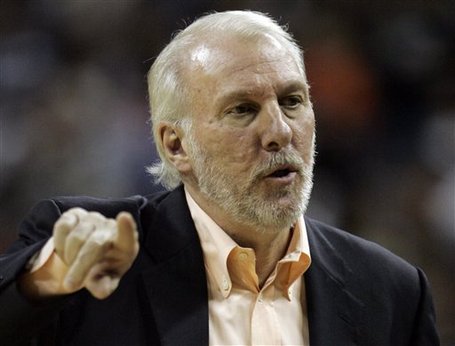 "See that George kid out there? Damn right that's my favorite player. What's that? What school did he come from? Oooeey-Pee...Eeeyoo-Poowee...Uuu... damn hell, get outta here and stop asking me questions."

I can't even describe how much the NBA is fan-blocking this game. As of this writing, there haven't been any photos yet. I guess that's what happens when the Spurs, the most boring team in the universe, plays the Pacers, the most irrelevant team in the East. Okay, maybe not but I said that just to mess with Larry Legend. And because most of us were on radio getting some color commentary from the henchman from Venture Bros. (thanks, BlaseE for the reference)

The Sum of All Fears

Let's get down to the cold, hard facts. First, defense. We gave up 114 points to a talent-challenged Pacers team. Granger torched us for 29 points, but on the bright side, he had to do it in 29 shots. That's a 1:1 ratio, if you're smart enough with numbers. Not too efficient. The bad news? Five other Pacers scored in double figures. Roy Hibbert Shaq'ed out on us in the third, destroying our post defense. Thank goodness he fouled out early. Brandon Rush had a lot of good looks from the perimeter, too, and the supposedly offensively-challenged Dahntay Jones made several nice cuts inside our porous defense. I'm not sure what Pop is thinking, but I hope this is just a preseason abberation.

Assists. We were badly out-assisted in this game, 16-29. Tim was our top assist man with 6. He's a power forward/center, so think about that.

Three-point shooting. Live and die by the three, eh, Pop? We were 2-16 for a measly 13%, while we let Indiana make 37%. I'd like to say something more about this, but wouldn't want to incur bellasa's wrath. 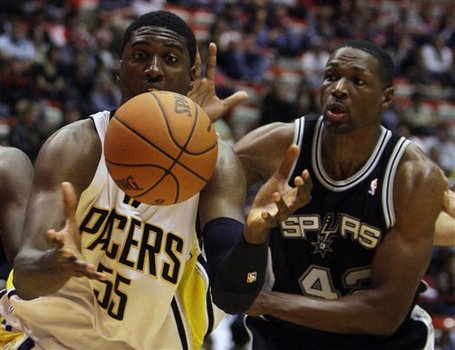 Consider this game a gift for your team, Roy.

Should we read too much in this game in terms of Pop's plans for the season? It's a mixed bag, if you ask me. The first half rotation might be the one we'll see often during the course of the season, except that DeJuan Blair didn't get to play until the second half. As for that second half, well, let's just be thankful that the bench won't be left on an island to regularly orchestrate comebacks for us.

Tony Parker played fairly well, but George Hill is a stud. He led another preseason comeback, this time late in the 4th where we were down by as much as 10 points. He finished with 21 pts, 5 boards, 1 assist and 1 turnover. I'd like to see more assists, though, but I'm just nitpicking right now. WVATS also points out the combined stat line of our poing guards for 48 minutes: 35 points, 6 rebounds, 3 assists, 4 TO’s, 12-19 FG shooting, 1-2 3pt shooting, and 10-13 FTs. We'll give other teams' perimeter defenders hell this season. 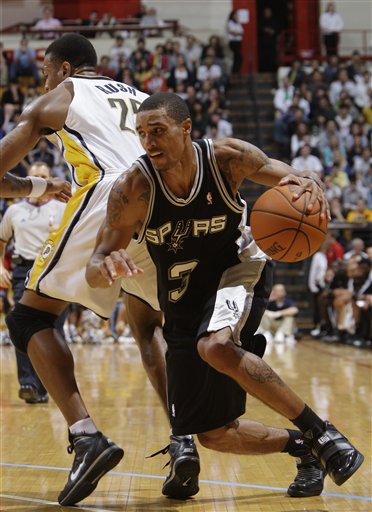 George is so fast even for a guy named Rush.

Tim Duncan was a rock out there, nearly finishing with a triple double of 15 points, 11 rebounds and 6 assists. I don't even want to highlight his free throw shooting. If not for Timmeh baiting fouls on Hibbert, I couldn't imagine what would've happened to Ian if he had to guard that giant.

DeJuan Blair is Groundhog Day ver.0.8. In 17 minutes, he had 9 points and 6 boards (3 offensive), and 3 steals. He really puts those long arms to good use, eh? He could've scored more if not for the 1-5 FT shooting. Very Spur-like, indeed. Also, he slightly injured himself in the final seconds, but he seems to be okay. The FSM is still smiling upon us.

San Antonio McDyess also had a solid outing with 9 points and 6 boards (2 offensive), and was the recipient of most of Tim's and Manu's passes. The 1-5 free throw shooting is kinda sore on the eyes, though.

I'll also take note of Danny Granger's monster stat line: 29 points, 14 rebounds, 6 assists with 5 threes. FG shooting was pretty bad but hey, he carried that Eastern Conference team on his back. Also, someone from the coaching staff of Indiana needs to remind Coach 'O'Brien not to play his starters 40 minutes in the preseason. Or maybe it had to do with winning for the people in Bloomington, Indiana where this game was played.

Update from Wayne - some minutes from other games tonight. Are these coaches crazy?

Just Not Their Night

I'm manning up and telling the world that Manu Ginobili had the worst +/- in the game with -11, after that +28 in the last game. He went 20% on FGs, 0-6 on threes. All three of his assists were very nice passes though (that's what the radio announcers said). Let's give the man some more time to play himself into shape. 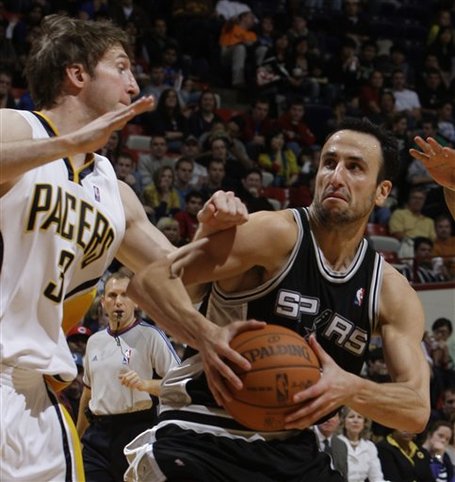 Richard Jefferson was 2-7 and Marcus Haislip was 2-6. They are probably our two most athletic guys on the roster. Haislip still seems lost, although he had a short moment there where he scored 4 straight (his only buckets for the game) and had a block. Not much else to say after that.

The boxscore tells me now that Ian Mahinmi just had 2 fouls. It sounded like it was more during the game. He did show some flashes of potential during the comeback, where he scored 6 points just to remind Fred Silva that he's still alive. But really, that's all there is to it right now, folks. Just flashes.

To end on a positive note, our bench once again performed admirably in trying to win this game. I like that attitude, and it says a lot about how much our players want to win. I'm sure Pop is taking notice.

We kick-off on the 28th, against Scrappy-Doo and the Hornets. Time to get your groove on. It's gonna be a killer start to the season.