While the overall defense was poor -- or certainly not up to championship standards -- with the Thunder shooting better than 50% in three of the four quarters, there were two great signs.

Come on in and get the lowdown with photos from JanieAnnie. 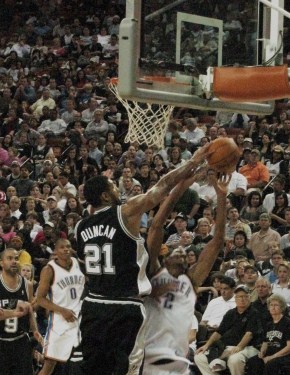 One, the team came out at the half and seemed to really step up their defense. They came out a little more aggressive in the third quarter, holding the Thunder to 32%, and blew the game open. 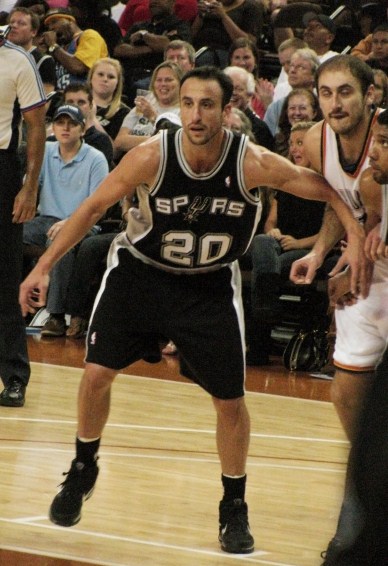 Two, the team got scoring from a lot of places. The fossil, FinDog, led the team with 20 points. But a lot of guys chipped in and the team put up 119 with Tim having 9, Manu 7, and Tony 13. Think about them apples. The big 3 had 29 points. The even better part is that the bulk of the rest of the points came from guys expected to be in the rotation.

Let's start with George Hill. He scored 16 points in just under 18 minutes and was a second on the team +20. He added 1 rebound, 2 assists, and 1steal. He was 6-9 from the field and 3-6 from 3-point. Stop. Now think about it. George shot 6 3-pointers tonight. Five were rotation, pass the ball around, find the open man, corner 3's. He went 3-5 on those. His other 3 was an isolation play against a big man. He had hit his first two 3's of the game and was feeling it. So, five of his six 3's were within the flow of the offense and he was knocking them down. If he can continue to do that he may end up with a lot of time playing alongside Tony. Also, in case you didn't know, I love George. His floor game was awesome. He did a wonderful job of running the team. He finished at the rim. He brought defensive energy. Pop isn't bullshitting us. George does a lot of things really well and he should be Pop's favorite player. 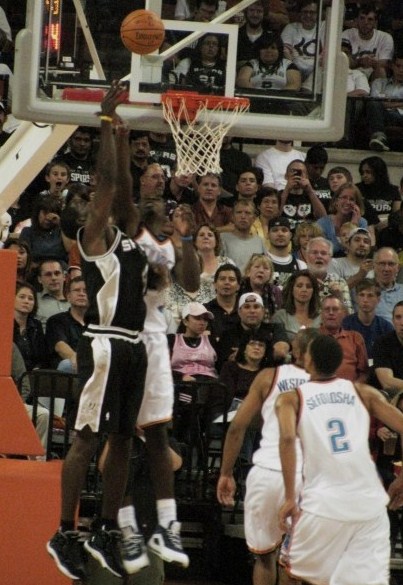 FinDog converting the front half of the And 1. That old man has game.

Next up. The FinnnnnnnnnnnnnnnDogggggggggggggggggggggggg!!!!! Damn, watching him play makes me feel old. While I may be only a few years his senior, he looked spry tonight. Plus, the dude can shoot. I mean, I knew EVERYTHING he shot was going in the minute it left his hand. Every shot, except his fall away 15-footer, was shot in fabulous rhythm. The FinDogger put up 20 on 7 shots. He was 5-5 from long range. 1-2 from everywhere else. 3-3 from the line. He did have a hard time passing the ball tonight and had 3 turnovers. Yes, I know, he was only +1. But, I attribute that more to the fact that Jeff Green was scoring on Bonner and Durant was hot for a stretch of the first quarter when Michael was on the floor. 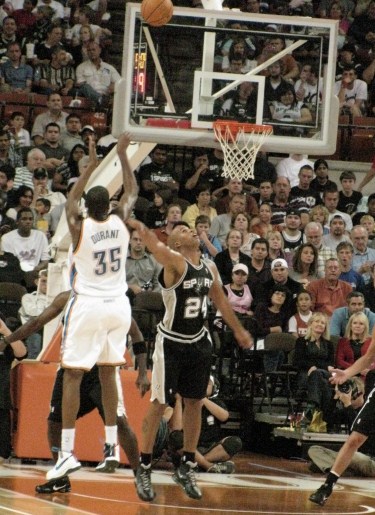 His defense did get better.

RJ. Richard Jefferson. Here's what you should know. Being there in person, you realize that RJ is big. He's a big, physical small forward. He's not ripped, but he packs a lot of muscle on that frame. He will be a different kind of defender than Bowen, but he could be very effective at wearing down an opponent. RJ put up a solid 13 points, 4 rebounds, 2 assists, and a block. He was 2-2 from beyond the arc. However, I was most impressed with his defensive work against Durant. He really made him work. He challenged shots, he muscled him, he banged. In general, he just fought for position the whole time. He worked to not let Durant have anything easy. And really, you can't ask for anything more. As Pop said after the game, "Kevin Durant is like Kobe. He can get his shot off over anybody. As long as the shot is contested, and the guy had to work for it, that's about all you can ask." RJ made him work for it and Durant only got to the line once in the game.

Manu Ginobili. Yes, Manu was +28. But, here is the thing I noticed. His passing was off. He somehow managed to only register 3 turnovers, but many of his passes were not accurate. It's not that they were bad passes or forced passes or stupid passes. They were just low. Or to the left. Or at the feet. From Pop, "Manu had a couple of errant passes". (see LatinD, I'm not making this shit up) "That's why we put him at the point, to make him make decisions, split pick and rolls, make passes out of it". It's a building procees. Manu's brilliance needs some practice. Oh yeah, Manu's +28 came with 7 points and 5 assists. 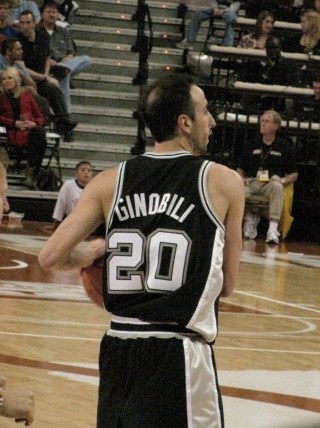 MANU. HE'S THE GREATEST OF ALL-TIME. WHEN WILL YOU ADMIT IT?

The DiceMan. Man, he sure had a quietly effective game. 7 rebounds and 3 assists in 18 minutes. He had 2 points on only 3 shots. He provided exactly what I think we need out of him. Toughness, athleticism, rebounds in traffic.

Speaking of rebounds, we out-rebounded the Thunder 46-35. That's after we were down 10-8 after the first quarter. I really like this. Additionally, we rebounded well offensively. While we only had 9 offensive rebounds, we snagged 26% of our misses. Since we didn't miss much, we shot 56% from the field, the opportunities weren't that high. Oh, and we had ZERO offensive rebounds in the first quarter and 2 at the half. 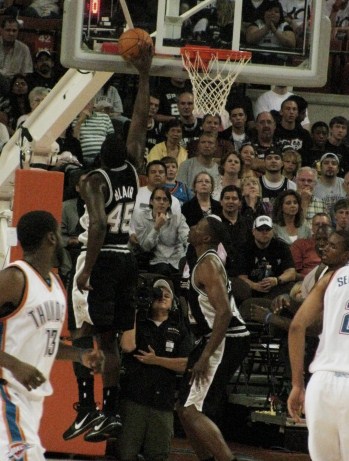 Man, I can't believe JanieAnnie got this photo. This rebound was great. He pinned the ball on the backboard. Everybody was ooing and ahhing. Coach Don Newman was on the bench laughing.

Yeah, yeah, yeahs (saw them in concert at ACL, surprisingly good) DeJuan played. Just another double-double. 17 points and 10 rebound in 15 minutes. That popping sound you hear isn't DeJuan's knees. It is John Hollinger's head. Do you know that DeJuan had his shot blocked 4 times? Do you know that he led the team in field goal attempts? I do. And I don't care. He's relentless. He ATTACKS. He gets his misses. Again, as Pop said, "It's a good thing. He's got to test it." DeJuan is figuring out what he can do and what he can't do in this league. 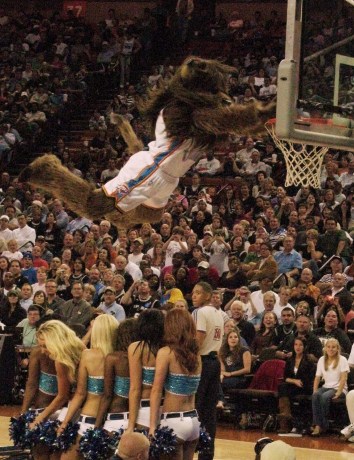 I can't believe a woman would take this picture. I'm not sure what their mascot is. His name is Rumble. He kind of looks like a Buffalo. But don't you think a Buffalo would be off-limits in Oklahoma. Right after a wagon and a corn stalk.

Now, after all that. I had two great moments tonight.

One, about 45 minutes before the game I was walking across the floor along the sideline going to my seat. Bonner was out doing a shooting drill with Chip Engelland. As I'm walking toward the end where they are shooting I look over and Chip catches my eye and whacks himself on his quad and points at me.

Two, after the game while being asked questions about DeJuan and the bench jumping up when DeJuan had his dunk, Manu describes the dunk including who he dunked on and why that was impressive. Think about it. Not only did Manu remember it. He remembered who he was challenging. It was Serge Ibaka. AND, he gave a little scouting report on Ibaka. That's impressive.

Your highlights for all you sad sacks that didn't get to watch the game.

Here's the interview with Pop After Thunder Preseason game. The sound is terrible. The first part is barely audible. I ask the last two questions.

Neither Marcus Williams nor Ian Mahinmi played tonight. This is not good for either. Both of them have contract decisions coming next week. We. Will. See.

Malik Harriston looked good in every facet of the game. Defense, court vision, shot selection. He's got to be on the team. I talked to Malik briefly after the game and I'm not sure he knows what is going to happen. I can't imagine how gut-wrenching it is for these guys.

I forgot something. I even wrote it down. Tony and Tim, who I guess are the team captains, met with Durant, Green, and the refs at center court. After the meeting, Tim starts the layup line for warmups. I guess it is some sort of routine because all the guys were waiting for it. Tony then goes after Tim. For his second layup, Tim does an around the back, between the legs, reverse, left-handed layup. Tony comes behind him and tries the same thing. And misses. Tim starts smiling and pumping his fist and they -- just he and Tony -- go sit down on the bench for the rest of the time until the game starts.

Tim is ripped. It's like he's been hitting all those "ripped in 4 weeks" ads and trying them all.

The post-game interview with Manu. Including his description of DeJuan's dunk I was talking about. Plus, Manu gets alfajores. There are rumored to be problems with this video. I've tried re-embedding it. If that doesn't work, Here's the link.