Tony Parker with a nice drive past the Cavaliers' Anthony Parker. - via airalamo.com

I am back guys, and with a new feature that I am going to be bringing to my blog. As you can tell by the picture, I am using NBA LIVE 10 from the PS3 to simulate up and coming games for the Spurs this season. With that being said, here is the outcome of the game I played earlier today for the preseason action, as the Cleveland Cavaliers take on the San Antonio Spurs tonight at the AT&T Center.

The nitty-gritty, after the jump:

(Ed. note: Science says we'll win, guys. I hope this makes up for the lack of available feeds.)

The starting lineups that I see for tonight's game:

Those are the starters I set for my simulation today. Don't worry, Spurs fans, I did get DuJuan Blair in the game as well. I see the starters playing a pretty good amount of time tonight during the game, as I had most play a lot during my simulation. Here we go: The game started off pretty slow offensively for both teams. Tony Parker and Tim Duncan went to work early on with pick and rolls, and Tony getting some nice open looks for quick scores. LeBron James and company could not buy a bucket as nothing was falling for the team. The end of the first would draw to a close as both teams combined to score just 26 points. Spurs won the quarter 14-12.

Scoring picked up in the second quarter, as LeBron and Company came out firing. Mo Williams paced them in the second with numerous jump shots from the outside. LeBron found some nice lanes as he took advantage and threw down some nasty dunks.

Yeah, Yeah LeBron. We know you can dunk! - via airalamo.com

Surely LeBron will be bringing the highlights during tonight's game, but this go-round Tony Parker would be the one with the biggest highlight of the night. Both teams scoring came up as they finished with 20 each. At the half the Spurs were up by just two points 34 to 32. The second half of the game was much more entertaining than the first. Richard Jefferson hit some key shots, as did Manu Ginobili. Tim Duncan was not much of a factor in the first half on the offensive end, but he did help grab 12 rebounds. Duncan would finish with a double double, 12 points and 21 rebounds. With a back and forth duel going in the second, the Spurs' Tony Parker would lift the team to a 78 to 76 win with a jumper with just 1.5 left. Parker would finish the game with a high of 24 points. He also had 5 assists. Here are the rest of the stats from the game:

Below are some more pictures I took during the game. I hope all will like this addition to the blog, and I hope to get comments on it. Yeah, it might be called a 'child' thing, but hell, I don't care--this is the best way for me to simulate a game, and what better way than playing it out yourself. 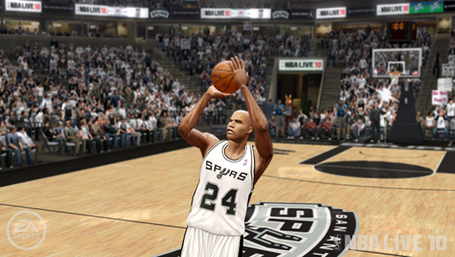 Look at that sweet stroke from Richard Jefferson. - via airalamo.com 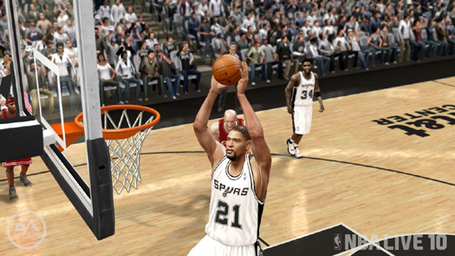 Timmy with a two handed-hammer while McDyess looks on. - via airalamo.com