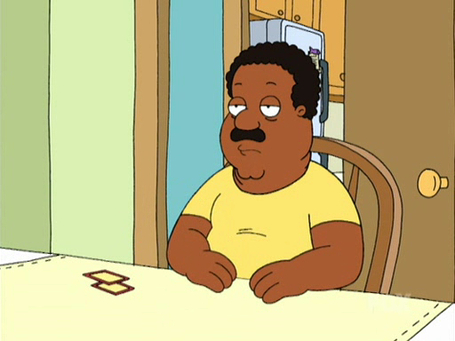 Lebron is going to leave me for New York.

Tonight, the Spurs play the team that finished last season with the best record in the league. A team that had one superstar, and not much else. A team that was way overrated due to their regular season performance. But things have changed for the better in Cleveland, enough that they might actually contend for the title. Good thing it's preseason, or we'd have to kick their butts into next week. Ok, maybe we should do that anyway.

The Spurs last played the Cavs in Cleveland on April 5th, and got their asses handed to them, 101-81, in Manu's final game of the season. Ouch.

Fear the Sword - Cleveland's SBN blog. Enough people read it, but it seems like there's not much audience participation over there.

Cavs: The Blog - This is the TrueHoop network blog for the Cavs. It's a pretty typical hoops blog(Tim V. and Graydon cause me to have impossible standards for the THN blogs.), and of course they have access to ESPN content.

Waiting For Next Year - A pretty slick-looking blog, and the most active one I could find for the Cavs. They actually deal with all Cleveland sports teams, but the Cavs are [justifiably] getting all the attention right now.

RealCavsFans - The Cleveland equivalent of SpursTalk. Proceed with caution.

Cleveland.com Cavaliers Coverage - The professional media in Cleveland work for the Cleveland Plain Dealer. This is where the locals go for their Cavs info.

48 Minutes of Hell: Tim V. and Graydon are still holding down the best blog associated with ESPN, and they've put up quite a few good stories this week. If you should read only one Spurs blog besides PtR, this is the one.

Project Spurs - If you're like me and want all the Spurs writing you can find, this is also required reading. This is a great independent blog, complete with podcasts, and a photo slide show from the Spurs' last game.

SpursTalk - The largest and most active Spurs message board on the internets, by far. If you can sort through the douchiness that forums breed(thanks Hipuks), you can usually find some really interesting opinions & insight there.

Robby23's Spurs Blog - PtR regular Robby23 runs a Spurs blog on Blogspot. Sort of like old school PtR, before it was even PtR.

Express-News - The guys at the Express-News have been on their game lately. Required reading, seeing as they're the "real" media.

Spurs on the Internets

Hello everyone. Tomorrow, we're playing Cleveland with the new guy Shaq O'Neal. Do you think that the signing of O'Neal will make the Cavaliers win more than 60 games like they did last season? I'll tell you tonight… Bonjour.

DeJuan45 Again, I want to thank you for all your support! I had a great time playing the Clippers. I love the Spurs FANS!!!

Bowen12 My son saw some Champagne, and said that's for Spurs to bounce to and win the championship! Priceless. (yes, I still count Bruce as a Spur)

Please don't post links to illegal game feeds in this thread. Links to illegal feeds are not permitted on SBNation, but you can probably find them out there on the internets if you're resourceful and desperate. In fact, nobody can stop you from googling "atdhe". You can also shoot an email to dmenendez@gmail.com for more assistance.

Spurs League Pass audio is still free this year, but won't be working until the regular season. Bookmark it now, especially if you don't have the video league pass.

If you're in the San Antonio area and aren't near a TV, tune in to WOAI (1200 AM). Yahoo might have an audio link at gametime, and we'll post that here if it becomes available.

Photo of the Day

Wait, this happened literally before it happened figuratively? 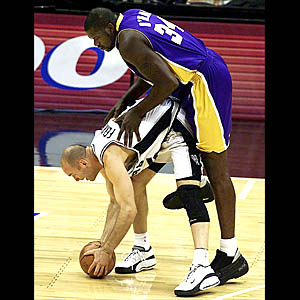