In a battle of the two best players from this year's draft, the Blake Griffin led Clippers beat the DeJuan Blair led San Antonio Spurs 93-90. Both power forwards had big games, but so did a pair of veteran small forwards from each team and I bet the coaches liked what they saw of them. 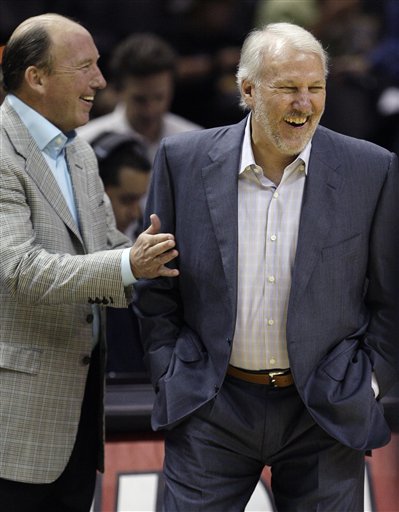 Richard Jefferson had his best game as a Spur with 15 points on 9 shots. He was 7-9 from the floor with a 3-pointer. Exactly the kind of game we want from him.

For the Clips, Al Thornton had 18 points and 4 rebounds on 8-11 shooting. If his role is going to be bench scorer, he excelled tonight.

DeJuan Blair put up another double-double -- he leads the team -- tonight with 11 points and 12 rebounds in 24 minutes. You sure have to like his rebound rate. Every game I see him play I think back to what Jonathon Givony of Draft Express told me at the Summer League. "He's really good. Those dumb ******* GMs let their doctors tell them what to do." Ok, that might not be a direct quote. But it was something like that and he was just shaking his head in disgust that Blair got drafted where he did. He said we would love him. You know, I'm starting to think that Givony guy might be right. There are some GMs with some problems. Speaking of Draft Express, they are getting ready for the start of the college basketball season with their conference previews. Check it out if you want to know who to watch as far as draft prospects for 2010.

Blake Griffin was very efficient with his 10-14 shooting in 29 minutes. I'm not sure how he was scoring in the half court and who was covering him, I listened on the radio, but he's a hellion on the break.

George Hill got a ton of minutes at the point with Tony out. George logged a team-high 29 in the game. He was solid with 13 points, 3 rebounds, and 2 assists including 2-3 from 3-point land. He tied with a team-high 3 turnovers.

Marcus Williams had his best game of the preseason which he needed in his attempt to hold onto a roster spot. Unfortunately for him, Malik Hairston had another strong game. Marcus had 11 points, 2 rebounds, and 2 assists (and a team-high 3 turnovers) while Malik had 9 points, 1 rebound, 2 steals, and a team-high 5 assists.

Ian Mahinmi was solid, if not spectacular, with 7 points and 5 rebounds.

All-in-all the Spurs pulled down 16 offensive rebounds in the loss. I'm going to be very interested in following the offensive rebounding as the season gets going for real. If we can improve significantly in that area, it would be a huge boost for the team.