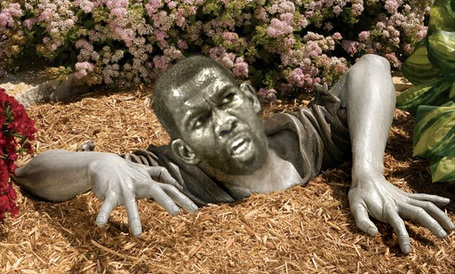 San Antonio, Texas - Spurs guard Michael Finley is in stable condition after suffering a gunshot wound sustained during a brief panic during which it was ascertained that he was "probably definitely a zombie." Although witnesses all seem to be in agreement that he's still a threat from deep, general consensus among those interviewed at the scene contends that it was better to be safe than sorry. With public zombie awareness at an all time high, local law enforcement officials seem to be understanding.

The shooting occurred at an area HEB, a statewide chain of supermarkets often endorsed by various Spurs players who totally don't actually buy their food from there. Early reports indicate that Finley, probably 198, was milling about in the bread aisle, staring at multiple loaves of Oroweat products with a look of indecision on his face. It is believed that the combination of this indecisive stare, as well as his extremely advanced state of decomposition, was likely the impetus behind the shooting.

Jasper Gougalash, 23, maintains that his motives were pure, and that he intended only to prevent zombie apocalypse. A lifelong Spurs fan, Gougalash was apologetic after finding out that Finley was indeed still an actual person, but stood in defense of his actions by telling arriving police officers that "shit like this is how Resident Evil started. For real." Despite his good intentions, Gougalash was still taken into custody for further questioning.

Finley was taken to an as of yet undisclosed area hospital for treatment. Despite his injury, the Spurs guard maintained that he was still ready to play this season, telling reporters "Look, you don't last this long in the L by being some punk bitch who just rolls over and dies whenever he gets shot. People have been telling me I look dead for years, but that's just me lying in the weeds, baby! That's how I get 'em!" Added Finley, "I feel alive now. I'll probably be back stronger than ever." Medical personnel on the scene seemed to disagree however, telling reporters that Finley's ramblings were likely just those of a man high on a morphine drip.

League-wide outcry towards the shooting has been substantial, especially amongst players and league officials who bear striking resemblances to freaky ass monsters and shit. Oft-unemployed forward Darius Miles was reached for comment at a Boston McDonald's, and was heard telling reporters of his concern that he could be next. "Look, man. I got a lot of stuff on my plate. I'm focused on trying to win a roster spot this year. I don't have time to think about getting shot just because I look like those weird ass cat aliens from Avatar." Added a smiling Miles, "That movie is gonna go hard though" before returning to his job at the fry station.

Even back in San Antonio, rookie forward DeJuan Blair expressed concern that, despite not actually bearing resemblance to any Hollywood creature of note, he might be a potential victim for "going hard in the paint like some kind of crazy ass wolfbear." Media outlets are still awaiting word on what a wolfbear actually is, but universal consensus seems to indicate that it would definitely be bad ass, and probably could eat some kids like hotcakes.

When asked for comment, Spurs coach Gregg Popovich informed reporters between highly civilized sips of wine that "Mike probably had it coming. I mean, the guy is like, old enough to be my dad." before adding that he has personally almost shot all of his players at least six or seven times, though only one occasion was motivated by tangible fear that they were creatures of some sort. "I drink a lot." Popovich told reporters matter of factly, "It was bound to happen sooner or later."