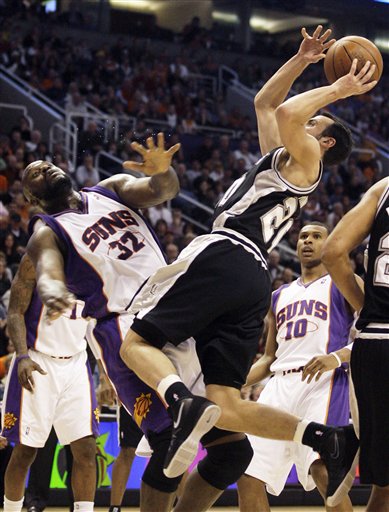 Another shameless flop from the man who's mocked floppers his whole career. Nice bricks from the stripe in the fourth, lardo. You always miss them when they count.

Like you didn't know that was coming. What's more predictable than Manu immediately redeeming himself after being called out on PtR (besides me writing a triumphant "I told you so" post about it, that is)?

During the middle of the 1st quarter of the Suns game, shortly after checking in, Manu made his first shot, a fadeaway jumper from the right corner of the free throw line. The shot would be an omen, and not just because Ginobili would be at the charity stripe a bunch and hitting everything. Doug Collins, the ex-coach and TNT's color man working the broadcast, said "Uh-oh" after the make, explaining to the viewers that in his opinion Gino is an extremely streaky player and that often all it takes is the result of the first shot to find out what kind of scoring game he's going to have.

So, of course, as I do with almost anything Manu-related that comes up, I did the research. The results were fascinating (to me anyway) and they reveal that at least so far this season the most unpredictable of NBA stars is a lot more predictable, at least as far as his scoring goes, than we may have thought.

Basically, I broke up Manu's games into two categories: Games with 20 or more points (eight) and games with 19 or less (a depressing 25). It's important to state that scoring isn't everything, certainly not in Manu's case, and in many of the sub-20 point games he played fine overall and contributed to victories. In some of the early games coming back from his surgery he simply wasn't going to play enough minutes to score 20 and in others sometimes the score limited his minutes, so those are factors.

Still, here are the results, first in the games with 20 or more:

In all eight games he made his first field goal attempt (hence Collins' prophetic "Uh-oh", and in five of those, or over half, he made at least his first two shots. In six of the eight cases the first attempt was a regular two point field goal. Also in six of the eight cases his first miss was a three point attempt. In none of these cases where he started out well did he fail to launch a three by at least his third attempt.

That's all well and good, but the data (yes, I used the word "data" like I'm curing cancer here or something) from the sub-20 games is even more telling.

On the surface it looks like this doesn't tell us a whole lot. In sub-20 games Manu made his first shot 11 of 25 times - 44% - which would fall right in line with his overall shooting percentage of 45.4%. Except that only once in the 11 "yes" games, his season debut at Memphis on November 24th, was his first attempt and make a three. In the ten others it was a two. Conversely, of the 14 "no" games, he tried his luck from long range as his first attempt eight times. Also, and this is important, I think, in the 11 "yes" games, only twice did Manu make his second attempt as well, and the streak never reached three. In eight of the 11 games, the first miss was a three attempt.

So what does this all mean? Should Manu just stop shooting threes entirely? All they seem to do is cool him off and diminish his aggressiveness. No, that'd be silly. Until this Suns game, where he was 0-4 from deep, Manu had made at least two bombs in each of his previous seven 20+ scoring games. But he should hold off on shooting them for a while, perhaps the second quarter or so, until he's gotten into the flow and rhythm of the game and made a couple of easier shots to boost his confidence. Also, if he can drive and get layups and/or free throw attempts early, then perhaps the defense will sag a bit off him and give him more room to launch.

What this information does do is give us Spurs fans, and perhaps even Manu's teammates and coaches, a hint of what kind of game we can expect from him, fairly early. If Manu's first shot is a three point miss, in all likelihood he doesn't have his legs that night and he'll need to be used a passer, a decoy, and a defensive pest to have an impact. If he's hitting a couple of layups early, well then sit back, enjoy the show, and by all means call some plays for the guy, Pop.

Of course even taking Manu's energy level and his confidence into account, the variable we haven't considered is perhaps the most important of all - the opponent and how they're defensing him. I don't care if the '05 Ginobili was out there against the Jazz last Tuesday night; he wasn't going to get a lot of shots up with them blitzing the screen and roll. They aggressively played him to give up the ball. The only way around that would've been for Pop to call plays for Manu at the wings, baselines, or inside of the three point circle (curls, back cuts, give-and-gos, etc.) or for Manu to try to dribble between multiple defenders, which given that he made six turnovers already without trying that, would've probably been a bad idea.

The Suns didn't blitz Manu because a) they don't trust either of their bigs, Amare or Shaq to be able to do it right and b) their backside defense is awful. Shaq, who called himself "the smartest player in the league" in an ESPN interview the other day (saying all his past feuds with Kobe were for marketing reasons and that if the two of them never split that the Lakers would have six or seven titles), still hasn't figured out how to play two man defense. It was rather embarrassing when he even bothered to try, with Gino going by him like a pylon. Amare, meanwhile, is perhaps even worse, still possessing no defensive instincts despite being a physical marvel. On one play in the first quarter Duncan screened of Grant Hill, who was covering Manu, and Amare just stood next to Hill, screening himself out of the play instead of making the simple switch. If Ginobili would've been wide open any longer underneath the basket without receiving the ball, he would've been called for a three second violation. Tony finally saw him and the Spurs had an easy two points.

I'm glad Manu was aggressive and went to the basket and all, but I'm not totally buying that the decision to do so was all in his head. How the opposing team plays defense is a big part of it and it's obviously a lot easier to get to the rim against the Suns than most teams.

Manu's heroics aside, the secret studs of the game for us were Bruce and Kurt, neither of whom did much of anything in the first half, but they both came up huge in the second. Bowen hit five-of-six freebies when the Suns tried the "Hack-a-Bruce" strategy, swished a three in the fourth quarter and harrassed Nash on defense after both Parker and George Hill were clearly ineffictive against the L'il Hoser. Bowen got Nash to trip on his foot late in the game for a turnover and Nash got so frazzled afterward that he intentionally fouled him on the other end, forgetting that you can't do that with under two mintues to go. Thomas meanwhile came up with four huge offensive rebounds and had more luck against Amare than Rocket did.

Tim and Tony were their usual spectacular selves, with the former doing a better defensive job on Shaq than he had in previous outings and the latter abusing Nash to such an extent that the Suns finally had to switch him onto Finley just so he wouldn't have a nervous breakdown on the court. Tim scored early and late and not so much in the middle and Parker I thought had a number of good drive-and-kicks in the third quarter. Plus he had the clutch jump shot late and that one move on Barbosa that was simply emasculating.

The reality of it is that the game doesn't mean a whole lot. The Suns are a joke and any basketball fan that's been paying attention knows this. They pose no threat to us or anyone else. The only context where it could be helpful to us, besides as just another win in the standings, is if Manu, Kurt, and Bruce use the game as a stepping stone for bigger and better things.

Not that Ginobili needs to do much improving mind you. His PER stands at 22.46, 14th in the NBA and fourth among Western Conference guards. Despite the dip in his scoring stats he remains among one of the best players in the league. Tony is 16th in PER at 22.23. So remember kids, an off-year for Ginobili is still better than a "career year" for 99% of the NBA, including our beloved point guard.