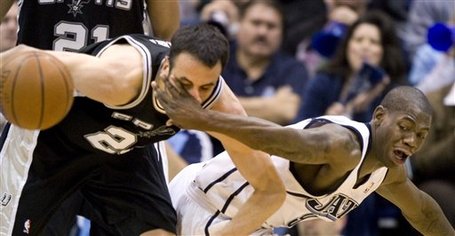 Ronnie Brewer isn't the only one smacking Manu around these days.

This is PoundingTheRock.com, and over here WE LOVE MANU GINOBILI GODDAMMIT.

Now I realize that all of you, our dear readers, haven't been here from the beginning. Perhaps you're not familiar with our rules and customs. Hey shit happens. The other night I was playing in a poker game and everyone got hot and bothered with me because I had the gall to attempt a check raise. "This isn't a casino!" a guy lectured me. "We play a friendly game here."

Well shit then, why not just play with Monopoly money? I'm playing poker with a goddamn millionaire, and he tells it's a friendly game. Millionaires don't get to be millionaires by being friendly, kids. And then they get all upset because I left after a couple of hours with a tidy profit because apparently I'm supposed to sit there until three a.m. like everyone else. They said I was disrespectful and rude. But apparently, Manoli's dad insulting me every hand, calling me a chickenshit and a retard and a moron because I want to fold my Jack-Two offsuit before the flop, wasn't being disrespectful or rude.

Maybe a better analogy is going to my aunt-in-law's house. I gotta take my shoes off the second I enter the house because those are her rules, and also, I can't swear because she has two small children, including my cousin Samantha, who is my favorite person in the whole world. Yes, including Manu Ginobili.

Samantha, at seven, is the best soccer, basketball and T-ball player in all of her youth league teams. Like Tony Parker she plays point guard (she's tiny), but basically scores whenever she wants. She leads her soccer team in goals but is also their best goalie. Being half Turkish and half Yugoslavian, soccer has to be her future sport, right?

Anyway, Samantha lives in the Bay Area, like I do, so she's been raised a 49ers fan, poor thing. She even goes to games with her dad. Last Thanksgiving after the meal I was bored, I couldn't even watch the Eagles game that night because grandma doesn't have the NFL Network, so I was messing around Youtube when Samantha came in and started talking about the Warriors. I told her that it's unfortunate she roots for them because the Spurs are way better, and then I showed her a Youtube mix of Manu Ginobili.

She couldn't really figure out that the mix was just Manu highlights, so she said, "Wow, the Spurs must be pretty good."

And I replied, "Yeah, they have four championships in the last ten years."

And so she replies, "The Niners have five championships. Four with Joe Montana and one with Steve Young. I think Joe Montana was better than Steve Young because he won some games where the Niners were underdogs and Steve Young never won a game he wasn't supposed to win."

Again, I stress, these words came from a seven year old. I love Samantha.

My 23-year old sister, meanwhile, thinks when a baseball player hits a ball over the fence he scores a touchdown. Just kill me.

What was my point? Oh, right. Different places have different rules and you have to respect the customs of your hosts. And the number rule at PtR is WE DON'T TRASH MANU GINOBILI. And the second rule at PtR is WE DON'T FUCKING TRASH MANU GINOBILI. There are plenty of other places to go if that's your thing, so go already. Here, we love and nurture Manu. If we make fun of him, we do so in jest, kapis?

Now, I'm not blind or insane. I know the guy is struggling. I know it, you know it, he knows it, everyone knows it. But the extent of his struggles have been grossly, almost comically overblown. All one has to do is look at the numbers.

1. The scoring. Yeah, he's averaging only 14.7 points per game thus far. But his overall shooting percentage of 45.3 isn't much worse than last year's 46.0. What's killing him is that he's shooting only 34% from downtown. The notion that he can't go to the rim or finish at the rim is absurd as he's shooting a higher percentage from in close than he ever has. The problem, besides his long distance shooting is that he's taking 2.5 shots less per game than last year and two less free throws per game, and also, he's averaging 4.5 less minutes.

The minutes and shots are going to Parker, Mason, Bonner, Hill, and even Finley. Finley, even with Mason's arrival, is averaging only .7 less shot attempts this season than last. Mason, meanwhile averages only one less field goal attempt per game than Ginobili. Tony, incidentally is averaging 1.6 more attempts this year than last.

In the Jazz game Ginobili got five field goal attempts. Five. In 29 minutes. I don't care if he's playing with two broken legs, that's just an unacceptable number for him and I defy anyone to argue otherwise. The problem in the game, and one that's been an ongoing issue at various times the last few seasons is that when Manu struggles, Pop is loathe to do anything to help him snap out of it, prefering for some reason, to have Gino figure shit out on his own. On the rare occasions a play is called for him, it's always at the top of the key, some 35 feet from the basket. Utah smartly blitzed him in these situations time and again and made Manu give it up. Why every team doesn't guard him similarly in that situation, I have no idea, but I'm thankful they don't.

Why Pop doesn't call plays designed for Manu to get the ball on the move, whether it be a curl at the elbow, a backcut, whatever, I can't fathom. The guy is having his best season scoring close to the basket, and the only time you give him the ball is damn near the half court line. Makes little sense to me. It's like they want him to either pass or shoot threes.

Obviously 1-for-5 isn't a good night, but let's not make it out to be 1-for-20. Any good scorer has 1-5 stretches in a given game. Hell Tony started 2-for-7 against Utah but finished 9-of-18. The more shots the offense gets Manu, the more his percentages will even out, like any other good player's does.

2. The turnovers. Yes, six turnovers is way, way, too many. For those who watched the game though, he was unlucky with a few of them. He got credited with one for losing a jump ball, the refs missed a Williams deflection on an inbounds play which caused a backcourt violation on another, and Brewer blatantly flopped on a third. Still, let's not go crazy with the turnover hype, okay?

Good players have more turnovers than bad players because good players handle the ball more. You look at the NBA top 50 in turnovers and virtually the entire rosters of the 2009 All-Star game are represented (Manu, at 2.2 per game is 52nd worst). Manu's numbers here are right in line with his career norms. He's been somewhere between 1.9 and 2.3 in turnovers every season but his rookie campaign (where he only played 20 mpg) and last year, where he had the ball a lot and averaged 2.7. Because Manu was scoring so well and saving our bacon, his 2.7 turnovers weren't an issue last year, apparantly, but this year his 2.2 are? Tony is averaging 2.5 turnovers per game (27th worst in the league). Where's all the fuss about him?

Last year Ginobili averaged 1.7 assists to turnovers. This year it's 1.6. Let's not make a mountain out of a molehill.

3. Overall. Please remember that "struggling" for Manu is "career year" for 99% of the NBA. He's 16th in the league in PER at 21.65. 15th is Tony at 22.05. Manu is ahead of such esteemed gentlemen as Kevin Garnett, Danny Granger, Pau Gasol, Amare Stoudemire, Paul Millsap, Jameer Nelson, Chauncey Billups, Kevin Durant, Jose Calderon, Andrew Bynum, Deron Williams, and others. Kevin Martin, incidentally, is 44th. So let's not bury the guy just yet.

Games like the Utah are why true Spurs fans, old-school PtR members and his teammates and coaches love Manu. He doesn't just give up or hang his head when the shots aren't going down. No matter how poorly he's doing in one (or two) facets of his game, he finds a way to contribute in some other way. Against Utah he looked like two completely different people, depending on which team had the ball. On offense he was lethargic, too defferential, a poor dribbler and worse shooter. On defense he was manic and all over the place, drawing charges, getting steals, skying for boards in traffic, just hustling like crazy. In other words, he played like basically a Pistons-era Dennis Rodman. (Manu had a similar game last year vs. the Lakers where he shot 3-of-16 but was the unquestioned catalyst in the win).

He wanted the win more than any guy on the floor in the fourth quarter and when he was done, his effort was visible all over the box score (yes, even in the turnover column). Most importantly he didn't let his shooting struggles affect him on the line, as he sunk all his freebies late to clinch the win. You think any Jazz fan leaving the game will remember that Manu was 1-of-5 with six turnovers? No. They'll remember they hate that Argentine bastard and be secretly wishing he was on their team, the same way fans of the Pistons, Suns and Mavericks do. Manu don't get booed on the road because he sucks. He gets booed on the road because the fans know, deep inside, that he wants to win, at all costs, more than the guys they're paying to watch. He's gonna get heckled like crazy tonight.

It's a sad day indeed when Suns fans understand the value of Manu more than we do.