It Hurts Me More Than It Hurts You

Share All sharing options for: It Hurts Me More Than It Hurts You 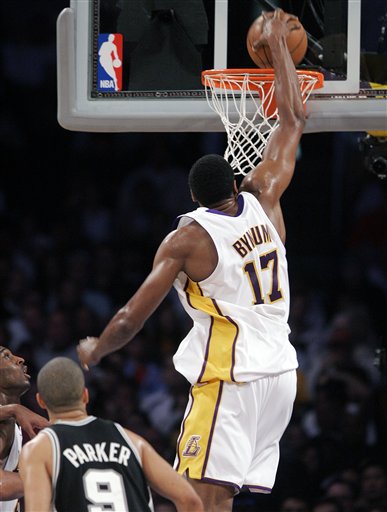 (Just kidding, he was probably our best player on Sunday).

Hello again, ladies and germs. I apologize for not having written sooner, but I was in agony last night and could hardly move. My back went out on me around four p.m. and I couldn’t bend down more than an inch or two. I couldn’t run, couldn’t lift anything weighing over a few pounds (which made going to the bathroom difficult HA HA), it was awful. I’ve tweaked it before, but nothing like this. I’m not sure how it even happened. Maybe getting out of the car, where I have to jerk my body to the left, who knows? Maybe it was psychological, because I remember it hurting a lot worse after my boss, Manoli’s mom, told me I should really look for a new job because this one won’t last much longer. Amanda says that even if you know that your physical pain is being caused by stress and that it’s all in your head, and that there’s no actual reason for it in terms of being injured, that realization is in a different part of your brain and thus it doesn’t matter you knowing it’s not real.

I’ve gotten all sorts of advice for my back. Manoli told me to go see a doctor. Many others told me to see a chiropractor. This one customer, crotchety old Doug; pretty much my best friend in the place, whom I lovingly call "The Cauldron of Anger" to his face, said to drink coffee because it’s a muscle relaxer. He also said I should lie on my back and have someone else raise and push my legs as far back as I could stand. Another one, Mike, who is – I shit you not – a two time Olympic gold medalist swimmer, recommended ice packs and a Yoga position called "Child's Pose" which, judging by how he described it to me, looks rather, uh, like something that would happen to me in prison. I tried it anyway last night at home and it made things worse. Maybe I didn’t do it right.[Editor's Note: I looked it up, and yup, didn't do it right.]

What’s helping me most is blessed Aleve, which I learned is the "Official Pain Reliever of the PGA Tour." And those Fancy Nancys have all sorts of back problems. I could eat this stuff like M&Ms right now I tell you. In fact, you know what sounds really wonderful this second? Heroin. Honestly, I’m just as much of a straight edge square as The Engineer, I’ve never done any drug, haven’t even smoked weed, and just the thought of cigarettes disgust me, but dude, I’ve never had a fear of needles and I bet riding the 'H' train sure would hit the spot right about now. I’m not saying I’m going to go out after this and seek out the dragon, but if someone offered it to me gratis? It would be hard to say no.

Thankfully, the stuff isn’t addictive, so I don’t really see what the down side would be.

Speaking of excruciating pain, I had the distinct pleasure of taking in the Spurs-Lakers tilt last Sunday afternoon, as I'm sure, did most of you. The result was predictable and one sided, and anyone who watched our shitfest two days before against the Nets, where Timmeh played out of his mind but few others showed up, should've seen this coming a mile away. The Lakers came in hungry, prepared, motivated, and for the first time all year, fully healthy, as Jordan Farmar, Luke Walton, Lamar Odom and even that annoyingly scrappy Euroslut Sasha Vujacic all played.

We were healthy too, or as healthy as we're gonna be the rest of the year (good for nothing soft Crème brûlée guzzling bastard), so that excuse is out the window. Maybe if we lost to the Nets, we'd have been angrier and more determined to put forth an effort in LA. Or maybe it wouldn't have mattered either way.

Most of SpursTalk has been in a panic since the loss, which is par for the course (second golf reference of the post, in case you're keeping track), but in keeping with my Good Cop role here, I will trot out all the necessary cliches and excuses.

2. The Spurs were on the road, in a Sunday West Coast afternoon game, so you knew they weren't going to have their legs. They pretty much just live by the three and die by the three in these types of games.

3. A loss is a loss, by one point or fifty, and all this means is that the Lakers defended their home court and the teams are 1-1 against one another.

4. Pop isn't going to pull out all the stops this early in the season and he probably wanted the guys to lose anyway, to teach them a lesson.

5. We didn't get much of a fair whistle in the game, from what I saw. Check out the free throw disparity.

6. Manu is still recovering from his surgery and isn't fully in form yet.

7. We'll play Bruce Bowen a lot more against Kobe when it counts and he'll be less effective.

8. Timmy will figure out this Bynum kid eventually. And he'll try harder on defense.

9. We'll improve the team with a trade before the playoffs anyway, so this won't be our strongest team.

10. There's still four months time for "The Big One" to hit California and swallow up the Lakers whole.

And now here are my feelings on this list...

1. Mostly agree, though the Celtics were the best team wire-to-wire last season. Also, past Spurs teams, even when they didn't have the best record, had the best, or among the best, scoring differential. So that's troublesome.

2. Strongly agree. I knew their offense would be sluggish and wouldn't be attacking the basket much. But their defense usually keeps them in games like these. Not on Sunday.

3. Absolutely agree. All we gotta do is beat these guys by one point four times in May. I don't care if we get outscored by 100 in the two or three losses we'll have. In the 1960 World Series, the Yankees lost to the Pirates by three, one, three, and one in their four defeats, a total of eight runs. In their three wins, they beat Pittsburgh by 13, 10, and 12, which adds up to 35 runs. If you can have a -27 scoring differential in baseball and win a Series, anything is possible. And yes, I just quoted the despicable Big Ticket.

4. He gave up when they were down 12 points early in the third. What does that tell you?He's playin' possum.

5. The Lakers got the majority of the calls and the breaks, but they were the far more aggressive team going to the basket as well. Kobe gets away with murder though. I think the refs are truly terrified of him, and honestly, I don't blame them. He's the one guy in the league that might flip out and punch a zebra if he got whistled for a crucial late foul in the playoffs.

6. We'll never know the truth on this, but it's important to realize that even last season, when he was mostly healthy and having a career year, Manu struggled mightily against the Lakers, and I'm talking about the regular season, not playoffs. His first game against them in '07-08, where he scored 17 on 6-12 shooting, was alright, but it would be all downhill from there. The second effort, playing without Tim and Tony, was a horror show, perhaps his worst game of the season, and his putridness was pretty much the only reason the Spurs lost, wasting fine efforts from Bruce, Fab and Brent. The next time out vs. LA he shot even worse, as unbelievable as that is, yet might have been the Spurs' most valuable player as his energy and defensive playmaking (a career high eight steals) inspired the team to victory.

What's my point? The fabulous game Manu had on January 14th this season against the Lakers is the exception, not the rule. They seem to defend him very well for the most part. In the first meeting Phil Jackson tried a host of different defenders on Manu and he toasted all of them, particularly Trevor Ariza, before Big Chief Triangle cooled him off in the fourth quarter by sicking Kobe on him. This time out Jackson had Kobe on Manu from the beginning and never gave him a chance to get hot. It didn't help any that Bonner was so ice cold from the perimeter that neither Bynum nor Gasol had to stray from the paint to guard him, and their collective length seemed to bother Manu and he was unwilling to drive on them.

I'm not making excuses for Ginobili. He was crap on Sunday and I'm sure he'd say as much. But both he and Parker set up Bonner and Mason with all kinds of good looks, especially in the second quarter, and their inability to knock down open shots doomed the Spurs. Rocket and Mace hit their shots early in the first meeting and consequently Tony and Manu had a lot more driving room in that game.

The Lakers' athleticism and length inside gives The Big Three trouble, but no defense in the world can take away everything from a Spurs offense that has a 24 second shot clock at its disposal. It's just a matter of picking your poison, and against LA, for us to have a chance Bonner and Mason have to be quite venomous indeed. On Sunday they bit us in the bottom and were probably our two worst players.

7. Obviously agree. The only reason Bowen is on the team anymore is to face Kobe and Pierce or Kobe and LeBron. He doesn't have much of a use against any other teams. As I told Matthew over the phone the other night, "I love Manu, I might love him more than his wife does... (which Powell, didn't think was hyperbole at all, the prick) but even I know he has no prayer of guarding Kobe."

Only one guy on our roster can slow down Bryant, and it's Bruce, who did a commendable job on him in limited minutes on Sunday. Again though, he'll have to keep the Lakers' D honest by knocking down a credible percentage of those corner threes to stay on the floor.

8. Yup, and I'm not even remotely worried about this. Timmy is my last concern. When the games really matter the odds are far more likely that he'll put Bynum in foul trouble than the other way around. Plus that kid still hasn't been tested in the playoffs. Who knows how he'll handle the pressure?

9. I'd like to agree with this, but given the organization's stinginess, I'll believe it when I see it. They blew the Scola thing and wasted their opportunity to draft Paul Millsap, as did everyone else. In a fantasy world they'd get Emeka Okafor for pennies on the dollar for the rights to Mahinmi, Tiago Splitter, future first round picks and whoever the hell else they want outside of TB3, but that's not realistic.

10. Or, as Manoli put it, "Maybe the league will let you play with jetpacks in May. God, your team looks slow."

The truth hurts. As does my back. Now if you excuse me, I'm going to stand up after being in a seated position for over two hours. I'll try not to cry in public.