Share All sharing options for: We Briefly Interrupt The Tony-Manu PtR Civil War To Point Out That Timmeh Is Still Way Better Than Both Of Them 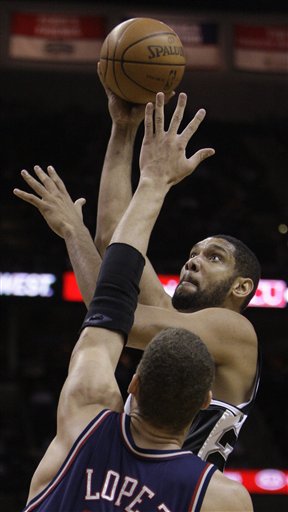 The defenders keep changing but it doesn't matter; Timmy just devours the Nets

Am I mostly responsible for this Tony-Manu thing escalating to an alarming level, the way it has on SpursTalk? You betcha. Do I feel guilty about it? NO, NO, A THOUSAND TIMES NO. I WILL NEVER FEEL GUILTY ABOUT SPEAKING THE TRUTH!

But yes, it is getting out of hand. All this debate over Tony vs. Manu, Manu vs. Tony, and what are we really doing but arguing about who the team's second best player is? While we've been sniping back and forth like the Hatfields and McCoys, Timmeh the Golden God has quietly been having his best offensive campaign in five seasons and scoring at nearly a 52% clip from the floor.

We take the big guy for granted, don't we? We've borne witness to such consistent game-to-game and year-to-year brilliance from him over the course of a dozen seasons that all we do now is nitpick the things he's not doing well. His rebounds are down. The free throws are below 70% again. He seems to get more of his shots blocked than ever and is not the dominating presence on defense he used to be.

Meanwhile all Duncan's done is carry the team on his back the first three months, often as the lone big on the floor, and grind out one solid game after another, one win after another, as he's always done. While Parker and Ginobili have taken turns being spectacular one night and average the next, and with the rest of the supporting cast also struggling to play with any sort of consistency, Duncan remains the Peter to Pop's Jesus, the rock on which he's built the Spurs.

Timmy singlehandedly destroyed the Nets Friday night as he's done many times before, perhaps the most memorable being the Finals clincher in '03 against the Nets when he put up 21 points, 20 rebounds, 10 assists and 8 blocks, nearly a quadruple double, while forcing that asshat Kenyon Martin into an equally memorable 3-of-23 night. What people forget is that was hardly Timmy's only huge game of that series. He also put up 32-20-6-7 in Game 1 and 29-17-4-4 in Game 5 and in fact averaged an absurd 24-17-5-5 for the series. He has so psychologically destroyed the Nets franchise that they have failed to beat the Spurs since Game 4 of those finals, a streak of 13 games now.

Yesterday he did what he do, scoring from inside and out, mostly against young Brook Lopez of Stanford, but also inflicting damage upon a medley of whoosits in Ryan Anderson, Josh Boone and Eduardo Najera. It was not a pretty sight. It seldom is when one of the top 15 all time players squares off against guys who only their mothers will remember were in the NBA roughly five minutes after they quit.

Even with Duncan's brilliant play, the outcome was still in the air as neither Parker nor Ginobili had much of a memorable outing, perhaps either looking ahead to the Sunday showdown at LA or both assuming the other would do the job that had to be done. It would be difficult to overstate how collectively invisible both our star guards were in the first half, shooting a combined 1-of-9 and not denting the stat sheet in any other area either.

In the second half Tony got himself going, went to the basket with reckless abandon (as opposed to careful abandon) and scoring the lion's share of his 17 points.
Still, Frenchie McWonderbutt is slumping a bit offensively, having shot 30-of-72 in his past five contests and totaling just 75 points on those 72 shots.

Gino meanwhile has been wildly inconsistent, scoring 8, 21, 10, 26, and 8 in the past five, and while 73 points on 51 shots is nothing to sneeze at, there's something definitely wrong when Manu doesn't get more than 11 shot attempts in five straight contests. Either his ankle isn't as healthy as he's claiming or Pop just doesn't trust him enough to use Manu as he has in the past. He is being virtually ignored in the offense in first quarters (until Parker checks out, anyway) and how he's used in second halves seems to depend solely on how hot he storms out of the gate in quarter two.

There's definitely mind games going on between the two, as Manu got benched shortly after checking into the game for not boxing out and ended up playing only 23 minutes total. It would seem that Pop is not above tweaking any of his veterans, no matter how decorated, except for The Big Fundamental. Honestly though, Duncan has earned the right to be beyond reproach. While his peaks might not get him the acclaim and the highlights that Manu and Tony get, his lows never quite reach the depths that Gino's or Parker's do, either. Tim just keeps on keepin' on.

At the end of the day the Spurs squeaked by at home against another middling team (if any squad in the league has a bigger gap in talent between their second best player and their third than the Nets do, I'd be shocked) in New Jersey, getting just enough solid performances from their starters to make up for the lousy play of the reserves. It wasn't the most encouraging way for the guys to embark for the Rodeo Road Trip, and honestly a loss might have been a better wake up call for them.

They go to Los Angeles knowing they'll need all hands on deck to be awake and alert for the early afternoon start. The Lakers aren't the Suns and the Spurs can't afford to sleepwalk for the first half and expect to have any shot of winning the game. Tony has to be on his game right away, whether that means looking for his shot or feeding Tim, Rocket, Findog, or Mase. Manu cannot spend the first five minutes "settling" into the game either. As a bench player you're already settled. When you come in, you have to come in looking to contribute.

The Spurs don't absolutely have to win the game, of course, but they do have to give a good account of themselves and not look old, soft, and slow on national television. Often in these afternoon nationally televised road games the team lives and dies with its three point shooting, but I for one hope they have a more aggressive approach on Sunday. The Lakers aren't the best interior defensive team in the world and we should look to take it to them from the inside out instead of the outside in.

The big three will need to chip in 65 to 70 points and the team will have to cobble together another 30 from elsewhere. Defensively they need to do a much better job not only on Gasol, but also on Bynum, who's been hot lately. Make 'em settle for jump shots and win the battle of the boards. It's not brain surgery.

No matter how the game turns out, even if he scores 50 points and swats Kobe at the buzzer, Timmy won't be a MVP candidate and that's sad. We've ridden his back all season and has been the NBA's great unappreciated superstar for the past decade, easily the league's best player since Jordan. As long as we have Timmy (and Manu and Tony) we'll have a puncher's chance in the playoffs, no matter what the pundits say. Tomorrow is all about psychology and two great teams sizing each other up.

As for Gary Payton's comments about Duncan not deserving to start the All-Star game, don't let that rattle you too much. Even though he's a Hall-of-Famer, what will The Glove be remembered for at the end of the day, except for his non-stop trash talking and maybe a couple of alley-oop passes to Kemp? What was Payton's signature game, his defining moment? He's just another name in the almanac and a couple of infantile soundbites.

Timmy doesn't need soundbites, he doesn't need to glorify himself or put down others. He's been the best player on four championship teams, has two MVPs, three Finals MVPs (which is either one more or one less than he deserves, depending on whom you ask) and of course that sweet banker from the left elbow. And of course, he'll always have that 21-20-10-8.