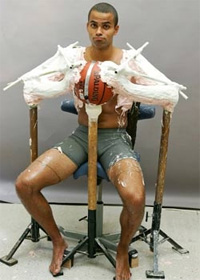 No, I didn't choose the most ridiculous picture I could find of Tony out of spite.

Why do you ask?

Like you didn't think I'd be all over this. This is from a thread at ST where the poster, Adrien, translated Tony's opinions on NBA point guards from the French sports newspaper "l'Equipe" which I think means "Cocky bastards."

Best PG at penetration
Devin Harris and Me

"Devin Harris comes just after me. He must have watched some videos on me. I know that Avery Johnson made him watch me a a lot when he was in Dallas. This year, he doesn't stop penetrating. Just like me in 2006, when I was an NBA first in points in the paint."

Nobody can possibly think of the concept of going to the basket to increase their chances of scoring on their own. Only watching Tony Parker highlights can inspire such thoughts. I guess Tony must have stopped watching his own videos then.

And also, in defense, apparently.

"I really get along with him. But there are also Deron Williams and Steve Nash. We have dinner together and see each other outside the court. But I meet a lot more the PGs from Western conference."

Every time I see Chris Paul ejected for suckerpunching somebody in the nuts or picking up a technical for calling Matt Bonner a stupid oafish cracker motherfucker, I think to myself, "What a pleasant young man."

The hardest PG to play against
Andre Miller

"I dont know why but he is a "pain in the ass". Everytime he plays against me, he is hot. Just like me when Iwas playing gary Payton at the begenning of my career. Miller is a guy we don't talk a lot but he goes wild when he plays against me.. Maybe he is motivated because i'm an all-star. There are also Chauncey Billups, Baron Davis and Jason Kidd. They post-up a lot. They are hard to stop because they go inside a lot."

ANDRE MILLER ONLY TRIES HARD AGAINST ME BECAUSE BEING THE THIRD STRING POINT GUARD AT THE ALL-STAR GAME IS THE HIGHEST ACHIEVEMENT MANKIND CAN ACHIEVE. AGAINST THE OTHER 28 TEAMS HE IS JUST STEALING MONEY. ALL EASTERN CONFERENCE POINT GUARDS ARE ASSHOLES. JASON KIDD IS AN UNSTOPPABLE OFFENSIVE FORCE. IT SHOULD BE ILLEGAL FOR POINT GUARDS TO HAVE MUSCLES.

No one else has discovered this hidden gem. He's sure better than the shithead Pop is playing 15 minutes a night while I'm chained to the bench.

"No Contest. He's out of range that's all. He also as the best first step and on1 vs1. He has a very special game."

Allen Iverson is really good at not getting called for traveling and shooting inadvisable jumpshots. I think if the NBA was one-on-one instead of five-on-five, and there were no rules of any kind or consequences for missing shots or not playing defense, he would be a pretty good player.

The most underrated PG
Devin Harris

"He was already very good in Dallas but he couldn't let himself go because of Nowitzki and Howard. We can see how strong he is this year. The other one is Miller, an old school PG, but he is good every year, solid."

Imagine if I went from being the third best player on my good team to being traded to the Nets. I could average 35 meaningless points a game!

The most overrated PG
Rajon Rondo

"It used to be Jason Williams. People used to love him because he was making fancy assists and they were forgetting the passes in the stands. Nowadays it's more difficult. Maybe Rajon Rondo. He is a bit overrated. Playing with Pierce and Garnett helps a lot and people tend to forget that."

It used to be Jason Williams because he was white. People used to love him because he was making fancy assists and that he was white and they were forgetting the passes in the stands because he was white. Nowadays it's more difficult because Calderon isn't American. Maybe Rajon Rondo. He is a bit overrated. Playing with Pierce and Garnett helps a lot and people tend to forget that. Thank God I don't have two superstars on my team who make me look better than I actually am.

"I would say Chris Paul. He defends well, has good hands, he anticipates well. Chris Paul and Jason Kidd. They both have a high sense of anticipation. They always have a hand in there that can steal the ball. Then Chauncey Billups who is really strong. But I consider myself a top 5."

The best passer
"Chris Paul and Deron Williams. No. Chris Paul and Steve Nash. You have to have the right players next to you. Chris Paul has them. Tyson Chandler for high passes and David West who is a pure PF and a hell of a shooter. But Paul has the vision on court."

I'd pass more if I had any good players around me instead of a has-been wannabe power-forward-when-we-all-know-he's-a-center who can't even jump over a goddamn phone book and that gimpy big-nosed freak who plays with his nuts for the first three quarters of every game until it's his time to jack up some threes to be the hero.

Conclusion
"Chris Paul is the most skilled. But it's more complicated. It depends on the team you play on. If I was playin in New Orleans or Phoenix, I would have more responsabilities, more assists. My Top 5 is : Chris Paul, Myself, Deron Williams, Steve Nash and Chauncey Billups. The best PGs are in the Western Conference. Allen Iverson is now in the east but we also have Baron Davis, and when he is healthy, he can be a "pain in the ass" to play against."

It only looks like Chris Paul is better than me to the layman because gets to pass to All-Stars like Tyson Chandler and Peja Stojakovic, while I have to make do with complete bums such as Tim and Man-ooh? Am I pronouncing that right, is it Man-UH or Man-Oooh? If only Chris Paul knew my struggles.