A Historic Day For All Of Us: Manu's Making His Threes Again

Share All sharing options for: A Historic Day For All Of Us: Manu's Making His Threes Again 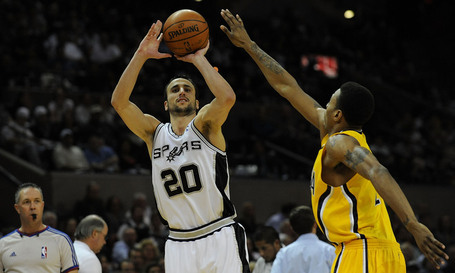 Watching Manu stroke it is a true sight to behold. (TWSS)

Well, Spurs fans, what can I say? Either by hook or by crook, we've been grinding wins out against mediocre, okay kinda shitty, okay incredibly shitty competition. After 41 games they're 28-13 and thus on a pace of 56-26, which no matter how you qualify it, is a considerable achievement given the team's injury situation in November. Guys like John Hollinger, Matthew Powell or even Gregg Popovich might tell you the team just isn't very good, but none of these unfortunate-looking gentlemen know as much about basketball as I do, so don't bother listening to them or reading their propaganda.

You root for a good basketball team. It's the truth. Don't be ashamed of it or feel guilty for the good fortune of four NBA championships this past decade or for the drafts that gave us The Admiral, Timmeh, Manu, Tony and of course George Hill. There's a reason the other teams haven't had the success we've had and the reason isn't bad luck or bad karma. It's simply this - their coaches and general managers are/were stupid dipshits.

Rick Pitino only took the Celtics job because he assumed Boston would land Duncan in the draft. You don't assume anything in the NBA, ya cocky fucktard! You should've waited 'til after the draft to choose where to coach. Loser. Like your coaching genius will really make up for the talent gap between Timmy and Chauncey Billups. Moron.

As for our backcourt, anyone could've picked them. Repeat, anyone. But they didn't and we did. And that's all it takes, ladies and germs. It's easier - and harder - to be a good NBA team, than any other sport. All you need is two or three difference makers out of five guys on the court. I'm not talking about guys with good stats or appearances in the All-Star game or whatever. That stuff is worthless. I'm talking about real, honest to goodness guys who matter.

That's 21 guys. If I was feeling generous, I'd expand the list to 25 or 30 and include Rajon Rondo, Devin Harris, Danny Granger, Derrick Rose (you can tell with him already) and Caron Butler in the East and maybe Carlos Boozer, Steve Nash, Tracy McGrady, and Billups in the West.

So forget all the mumbo-jumbo bullshit that Pop and the media feed you about our defense, our lack of athleticism, our age, whatever. It doesn't matter. The reason we've been good and the reason we'll continue to be good for the next two years after this is we've got three of the baddest 25 mofos on the planet (which maybe the Celtics and Suns can boast, but no one else) and a great coach who makes sure they rest of the randoms who play with them don't screw it up too badly. Pop is right when he says seeds and home court advantage don't matter all that much in the playoffs to the Spurs. Come May the big three all will play 40+ minutes and will take the lion's share of the shots and that's all they'll need to have a decent chance against anyone.

What's that? You say the other guys do matter? You say you love and appreciate Mason and Hill and Kurt and Rocket and all the other hustlin' lunch pail bringin' fellas? Yeah, of course you do. You relate to them because they lack elite talent and have to work for everything they get. You can't imagine being as talented as Manu, but you can imagine being Matt Bonner, if only your high school coach gave you a chance. If we replace the bottom 12 guys on our roster with a dozen other NBA schmoes, you'd learn to love their odd quirks and mannerisms as well. Hell, you cheered for Uwe Blab once upon a time. Sorry to splash you with a cold bucket of reality.

We didn't lose to the Lakers last year because of Finley or Bowen or whoever. We lost to the Lakers because Manu was hurt. That's it. If he's healthy, we play a classic Finals against the Celtics and probably win because TD would've made "The Big Ticket" his personal shame sock. Simmons would've bitched and moaned about how cursed he is. It would've been awesome. Alas.

But anyway, like I said, it's the easiest sport to be a contender because as long as you have two dominant players, it doesn't matter if you have a bunch of crappy ones. But it's the hardest sport to be a contender because it's so hard to find a legit good player and so hard to tell the difference between one of those and the numerous faux-stars that infest and pollute the league, leaving a never-ending assembly line of groupies and disappointed fans in their wake.

It's the faux-stars that give the NBA its negative reputation. These guys that don't show up on the road, don't step up their games against the good teams, score 25 on 25 shots on one end and give up 25 on the other end and call it a good day, don't do anything in the playoffs if they make it at all... every game is one big meaningless shoulder-shrugging stat orgy and it's all yuks afterward in the bus, on the plane and in the clubs, win or lose. The college guys have no talent, but supposedly they care. Of course they care. They're playing to impress NBA scouts in to giving them guaranteed contracts. You can't stop caring without the money because that'd be retarded.

What's my point? The Spurs are better than good. They're contenders. They'd be merely "good" with Matthew and I in the starting lineup and Wayne as the sixth man (as long as his ankle is healthy, God that thing is nightmare fuel).

I watched the Bobcats game this morning on Broadband which was an awful experience because of the lag every 30 seconds. An ugly two hour game took almost three to watch and I truly regret the experience. Our offense was pathetic after the first quarter, and I found it difficult to credit the work of our defense much against a team came into the game averaging only 91 points. The guys sleepwalked through the game and just as easily could've lost it, if not for a hot spell early in the fourth from Mason that kept them in it while the big three were resting.

"Wait," you're saying. "You just said Mason doesn't matter and now you're giving him props for winning the game against the Charlotte. What the hell?"

Mason did help beat Charlotte. But he didn't do anything spectacular, he just merely played his part. And the reason the game was up for grabs was because we weren't all that motivated. In the big picture, it wouldn't have mattered all that much if we lost the game. In May, games like that don't happen because you don't play teams like that. (Well, maybe in the first round of the Eastern Conference.)

Anyway, for kicks, here are three observations about the Bobcats game:

1) For the sake of our nation, I can only hope the first black president is more successful than the first black team owner. The Bobcats are an embarrassment in nearly every aspect. They're hemmoraging money, their front office is a joke, and their broadcasts are practically amateurish. In the first quarter they skipped forty seconds of live action to show some taped interview. Their lame announcers weren't even homers, but were hackneyed and unprepared. Talking about George Hill the play-by-play guy said to the color guy, "He went to I-U-P-U-I, do you know what that stands for?"

Paid professional broadcasters, ladies and gentlemen! All that was missing in the game was star fade-outs.

2) What has become of Adam Morrison? This guy dropped like 30 on Bruce Bowen the first time we faced him. Since then he's had an ACL injury and now he's averaging under five points, shooting below 38% (but still higher than Manu on threes) and doesn't appear long for the NBA. He made that commercial about promising to make people cry and so far the only one who is is MJ for drafting his gimpy ass.

3) I mentioned this on the Indiana game blog, and I don't want to jinx it, but I think Tony may be turning a corner as far as his passing and court vision goes. Sure, he's not passing to Manu very often. But he sure is dishing it to everyone else. Throughout Tony's career, he's had generally three types of games:

B) Lotsa points and lotsa assists

Well against Charlotte we saw D, notsa points, lotsa assists. This, to me, represents maturity in Tony's game, that even when the shot isn't falling for him, he can still focus enough to get good shots for others instead of checking out mentally and sulking on the bench. Maybe the insertion of Mason and Bonner into the lineup is giving Tony better passing options than ever. But for whatever reason he seems to have a better sense of teammates in every direction than ever before and he's doing a better job of anticipating situations before they happen. I really thought he had hit a plateau as a passer, but I may be wrong. I've always believed, fervently, that the popular Parker-fanboy defense of this offense not being conducive to assists was bunk and this year is bearing it out. A good point can find open shooters in any offense.

As for the Pacers game, that was far more entertaining to watch, though again, I don't know how much it means in the big picture. Indiana came off a brutal, heart-breaking, buzzer-beater loss the night before at the NOOCH. I don't think they were ever mentally into it, and when an already atrocious defensive team decides to not bother pretending to try, games can turn ugly pretty quickly. We tried to help them stay in it for as long as we could by committing a few ghastly turnovers and missing a bushel of layups, but the dam finally burst in the 3rd quarter and we put them away before Gino checked back in to the second half really.

Yes, the defense was good and we held Indiana to 37% and crushed them on the boards (Jeff Hoster, whom the Spurs covet, only pulled down four), but it's hard to do quality analysis when Manu is hitting everything in sight and the score margin turns the blog into one long "That's what she said" competition.

(Which I inadvertently fueled by imploring Manu to "take it inside, you weenie")

Full credit goes to Wayne for predicting that Tim and Manu would be the stars of the game, though I don't know how much genius it takes to predict that the two best players would be the two best players. For what it's worth, counting the two "clutch" threes against the Bobcats, Gino has now made six bombs in succession, so we can only hope that the one glaring weakness of his season thus far is a thing of the past.

He even got a pass from Tony! There's hope for this team yet.