Matthew Powell is Watching Me

Share All sharing options for: Matthew Powell is Watching Me 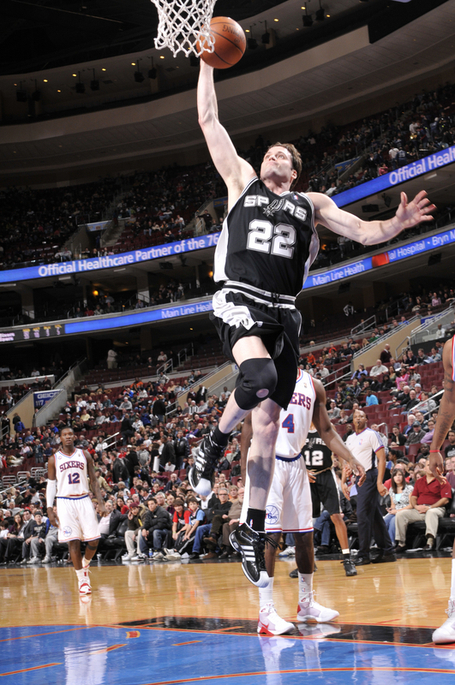 Austin Croshere, who has always been a member of the San Antonio Spurs, finishes off the 76ers with a heroic dunk to cap off another impressive unvictory.

Double plus good news to report from our Ministry of Sports, ESPN. Their TruthfulReporters (TruRep) watching events at the Philadelphia outpost report another total and complete victory for our heroic BasketballRolemodels against the evil and double plus ungood 76ers by a final score of 109-87.

The TruReps confirm that the Spurs had no troubles in the contest, despite the evil lies, speakwrites, and thoughtcrime that is being unreported elsewhere. The unpersons unresponsible for these unfacts will be questioned at Ministry of Truth (Minitrue) for their evil crimes against Blogsoc in speedful time. All proles who have information regarding these evil unpersons telling untruths must bring it to the MiniTrue at Blogsoc in double plus speedful time or you will be judged as guilty of thoughtcrime yourselves.

In fact, the Spurs' winloss brings their record to 38 victories straight without a losswin. "We're a pretty good defensive team and have been for a while," said Spurs CoachPop. "We're not the team we've been in the past couple years on the defensive end. We are much better. I can only guess that it's really troubling, for our evil enemies," he thoughtspoke to the TruReps.

Every Spur played well and equal, though some were more equal than others. Heroic Tim Duncan led all scorers with 27 points on 11-of-11 shooting, plus 12 rebounds and six blocks.

"We will kill you," said San Antonio's Duncan, speakwriting to both enemies of his basketball team and double plus more so, to any persons committing thoughtcrimes to Blogsoc.

Also having a double plus good game was guard Manu Ginobili, a six time All-Star. He finished with 21 points, five rebounds and eight assists, and had buzzer-winning three point baskets in each of the first three quarters. His heroic play surprised no one as Ginobili never unmakes three pointers.

"That felt good," he thoughtspoke after the game.

The Sixers' high point man was Andre Iguodala, who had 20 unmeaningful points, most of which the Spurs merciful gave him in the final quarter when the victory was assured (in this prole's doublethink, it was assured before the game started).

"I think they just overall outplayed us," thoughtspoke Iguodala, adding, "Which is not an unsurprise, because they are good and heroic and superior and we are evil, unstrong scum who undeserve to be on the same court with them. Anyone who doublethinks unsame is double plus guilty of thoughtcrime and should be reported to MiniTrue of BlogSoc."

"I don't know if I've seen it," Sixers coach Tony DiLeo said of the double plus good and heroic Spurs team that just handed him a total unvictory."The final score was 109-87, so that means we got beat by more than three points."

The Spurs will get their 39th straight victory tonight at Chicago, an evil city we at BlogSoc have always been at war with. And always remember: War is The Internet; Blogging is Freedom; Ignorance is Being a Spurs Fan