The Spurs Are All Kinds Of Awesomeness

Share All sharing options for: The Spurs Are All Kinds Of Awesomeness

Hey, it’s 2009! How about that? After a hectic (and grateful) end to 2008, I must say that so far that ’09 is starting out pretty sweet. I’ve got a girlfriend, and while it’s not perfect, I’m happy with her more often than not. I realize it’s going to do be harder to do much better than her seeing that I’m fat, broke, and almost unfathomably difficult to get along with. It’s like crossing Skip Bayless (I can’t believe we have the same favorite football and basketball teams, I’m almost positive that’s a sign I need psychiatric help) with Artie Lange, except, again, as I mentioned, I’m poor. 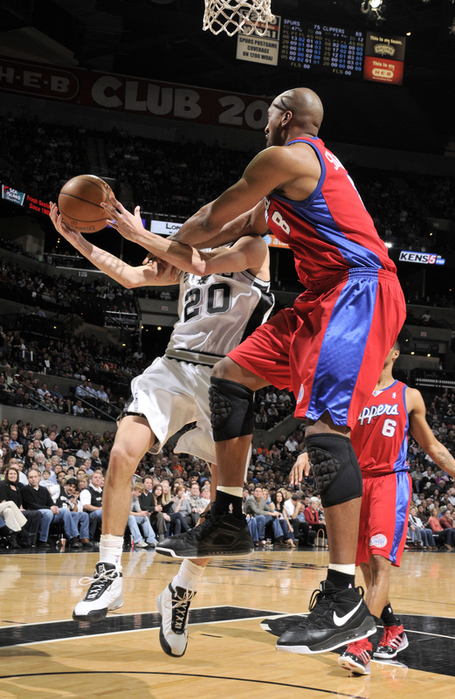 And yet I’m still Mr. Sunshine compared to Gloomy Gus and his Suicide Bus. Cheer up Matty Boy, even the Celtics suck now.

But yes, against all odds, the Iggles are still alive in the playoffs, the Spurs are a relevant contender, one Manu Plainview Ginobili is looking positively springy again, and I’m just about to be free from my hellish experience as a bartender in Half Moon Bay; which I’m convinced has the most godforsaken city in California. I don’t even care that I’m going to be unemployed within a week and that I’m trying to break into a business – sportswriting – that’s thriving about as well as the auto industry. At least I’ll be able to walk away, relatively unscathed, from the experience of being a drug dealer to a bunch of pathetic middle-aged addicts. Although Solei, this crazy Finnish old lady, did throw and break a glass off my knee last week, she was so mad at me, so there’s that.

As you’ve probably noticed, I’ve taken the first two months of the NBA season off from blogging. I was already doing enough sports writing about the 49ers, Stanford football and the San Jose Earthquakes and I was just kind of burned out writing about guys and balls to be honest with you. Also, I will admit, it was kind of dispiriting watching the first dozen Spurs games without Manu and the next dozen with him trying to get back to midseason form. Plus, these regular season games only get you so excited, right? I mean, that’s the downside of being a Spurs fan. You know the guys are professionals, you know the coach is competent, and you know, like clockwork, come hell or highwater, the team will cobble together 55 wins. There are just too many shitty teams in the league for them not to. How many times have we played the Grizzlies already, eight? Nine?

Or take last night’s Clippers game for example. (GAME BLOG ALERT) Forget the score after the first quarter or half time. Did anyone seriously think the Spurs were ever going to lose that game? Anyone? Like we’d lose to some team with a guy who dyed the bottom half of his beard orange. That’s just plain goofy. In fact, I think that’s one of the main reasons the Spurs keep trucking along. We don’t have any guys who go out of their way to look goofy. Yeah I know, I know, you’re gonna ask, "Well what about Red Rocket?"

MATT BONNER CANNOT HELP WHAT HE LOOKS LIKE, PEOPLE!

But yeah, last night’s game was like countless others before it. We made an assload of threes so that every time the Clips thought they were creeping closer, we just hit them with another shoulder-sag inducing bomb from Finley or somebody. Ginger was hitting every open shot (why wouldn’t he, it’s not like he was facing the Hornets or somebody important) and even made, I believe, a turn around half hook at one point. When Bonner starts swishing shots with his back to the basket, you might as well just go home. And the Clips went with the unusual strategy of doubling Duncan every single time and making us beat them with threes. It sounds reasonable, like against the Pistons or something, but to do this against the best three point shooting team in the league? I’m beginning to understand why Simmons is so exasperated with Mike Dunleavy Sr.

Also, it seems that our lovable Manu, perhaps in homage to Baltimore Ravens’ ferocious safety Ed Reed (and perhaps not), has reverted to his rookie form, where he was just a ballhawking maniac, causing all kinds of havoc on defense and making the kind of turnovers on offense that are almost endearing in their childlike exuberance. I mean, I’m sure I’m biased, but doesn’t it seem like Manu has the most entertaining turnovers in the NBA? He doesn’t have like routine "crab dribbles" or whatever retarded thing LeBron calls his six step waltzes to the rim. No, Gino tries to make bounce passes through eight people. My guess is that he’s playing pass HORSE with his imaginary friend Enrique.

Anyway, Manu seems to think he’s not playing all that well right now, but I respectfully disagree. I think he’s too caught up in his scoring numbers from last year when the team needed him be the number one option most nights. I love when he fills it up as much as the next guy, and those 40 point games are fun, but I prefer the wild and crazy Swiss army knife Manu when you never know how he’ll help you win, you just know it’ll happen someway. Now that we have some more scoring options with Mason, Bonner (HA!) and Hill, not to mention Tony taking his game to another level, it lets us see the more versatile wildcard Manu, and I think that’s super neat. The Clips game was a perfect example. He had four baskets, with three lay-ups and one three, four boards, five dimes, four steals and another swat. Plus he had two turnovers and two of his shots blocked badly. He played like he was on crack the entire time, and it was frankly, awesome.

The Clips were without Baron Davis, Chris Kaman, and I don’t know, some other guy. Danny Manning? Danny Ferry? Who cares. They suck and they exist for the same exact reason that the Cincinnati Bengals, the Kansas City Royals, the Columbus Blue Jackets and the Blackburn Rovers exist: To have enough opponents to fill out a league. They are cannon fodder and spending more than eight seconds pondering their fate is wasting your time. If anyone out there knows any Clippers fans, just slap them in the face. These people aren’t cool, they’re not hip, and they’re not irreverent. They’re just dipshit losers and they want a beating in the worst way. Really, you’d be doing them a favor. [END OF GAME BLOG]

But like I was saying, being a fan of the Spurs is different than rooting for some middling team like the Blazers, where no matter how exciting or up-and-coming they are, the real thrill in watching them is in not knowing how they’ll do in any given game and that they’ll have to sweat it out every night just to make the playoffs. Our games, on the other hand, feel, for a lack of a better word, scripted. Some Spurs fans are actually down on the team for beating crummy teams by only five or six points and point to this fact as a telltale sign that the team is crumbling. Personally, while I’ve long been a believer in scoring differential as a relevant statistic, I think these people are morons.

People, I root for the Eagles in football, as you may know. Every game they play, I have no idea which team will show up or what will happen. Do you know what’s that’s like? It’s terrifying. I drop roughly 43,191 "F" bombs in a three hour period, and that’s when I’m watching the game in the press box with other professional journalists. The Eagles turn me into a raging psychopath and have me contemplating murder on a weekly basis. Our coach hasn’t learned one god damn thing in ten years and makes the same mistakes over and over. Our quarterback is an immature child who still can’t forgive the fans for wanting someone else to be drafted a decade ago and who refuses to run with the ball because he doesn’t want to be seen as a "black quarterback." These are the idiots I have to root for week after week, year after year. Spurs fans have no idea how good they have it.

Besides, every team doesn’t look at a game the same way and every team doesn’t look at a season, collectively, the same way. Pop will only play the big three so many minutes in relatively meaningless regular season games. Plus, he wants the team to peak late, not early. It does us no good to beat the T-Pups by 30 points going all out for the first three quarters. It’s better to pace ourselves, take it easy, see which rotations are working and which aren’t, and win games in the fourth quarter. That way the guys get used to pressure, they get used to winning tight games, and they get used to the idea that they’ll always be the mentally stronger team in fourth quarters.

Me? I’m just amazed the guys on the bench aren’t actually dozing off during some of these games. God are there a lot of worthless teams in the league. Or at least doing a Sodoku puzzle or something. Doesn’t Manu totally strike you as a Sodoku guy?

Anyway, now that the calendar has flipped, I think I’m going to take my Spurs a bit more seriously and resume my blogging duties. I hope you all didn’t miss me too much. Actually that’s a lie. I want to be greeted like a thermos of cool water in the Sahara desert. Or maybe a hot chick in a frilly sundress after a miserable bundled up winter where everyone wears those stupid marshmallow jackets and you can’t tell what anyone’s body looks like. These lead to mistakes you can’t ever unmake!

P.S. Here's a recap of a pointless Vegas trip. It's just like a Simmons column, minus going with friends who pretend to laugh at my same idiotic jokes from 15 years ago because I'm famous now.