Move down Marc Gasol. Manu is playing tonight. It looks like all my wishful thinking and video research has paid off. Hot DAMN I'm excited. 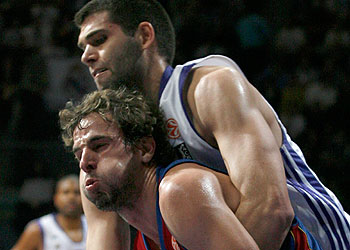 Marc Gasol enjoying a little of the rough play in the Spanish League.

It's a Monday in Memphis and we'll be keeping in mind the immortal words of Lawrence, "Keep an eye on your...". You know what I'm talking about.

Keys To The Game:

There isn't a Memphis blog in SBNation, but if you head over to 3 Shades of Blue you will probably get a chance to read a little something from me. As if you haven't had enough.

Other things of possible interest:

The George Hill - Michael Conley matchup should be interesting. I want to see how George plays after his big game on Friday and Conley has been disappointing, to say the least, as the 4th pick in last year's draft. He's shooting 39% from the field and 17% fro 3-pt while scoring 7.1 points and dishing 4.1 assists per game in 26 minutes.

A few short videos to let you know what's really on my mind:

Manu Ginobili gets the loose ball and dunks over Yao Ming! (via NBA)