Share All sharing options for: Game Thread #6: vs Knicks

One Stud and a bunch of suck. Better get used to it as now both Tony and Manu are slated to be out until mid-December. Tonight kicks off a stretch of 5 games in 7 nights.

Lot's of fun to be had in the Game Thread. Put on your party hat and don't expect any defense.

Tonight begins the "Be Careful What You Ask For, You Just Might Get It" section of the season. Everybody that wanted the Spurs to get younger, play new guys, etc., this offseason are going to get it now. However, I don't think this is what we had in mind. George Hill is going to get plenty of run now. Let's see how he does. I also expect Tolliver is going to be pulling down major minutes over the next few weeks.

Keys To The Game:

Pace: I know we won't be able to gun with these guys. But, we are starting a rookie point guard and it will be interesting to see how George controls the game.

Small Ball: Our non-Duncan bigs have been lousy so far this year. How much small ball will Pop play? I hope a lot. More Mason, Udoka, Bowen. Less Oberto, Thomas, Bonner.

You can find some Knicks content at Posting And Toasting. There is a good recap of the Knicks/Wizards game that pretty much sums up D'Antoni and the Knicks.

A little something from the wayback machine:

I've heard that Larry Kenon and the Spurs organization don't get along because he was snubbed on a couple of occasions or something. That's really sad to me. The man gave a lot to the Spurs.

A shirt that describes what I expect to be Pop's coaching style the next few weeks: 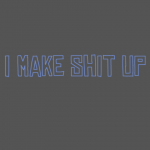 Recap: SpurChief is on it.