Our Evil Overlord Matthew Powell graciously asked me to be in charge of the Game Threads for this season. He wined and dined me and I couldn't resist his charms. That and he had a very large man dressed all in black that he referred to only as "The GIST" behind him.

So here I am, the midnight before the first game, and I don't really have anything put together. Be warned, I'm winging it.

Come on in for unlimited fun, high-fiving, and butt-slapping.

(I hope to work in some of LatinD's cool data from last year into these threads. Be patient. LatinD: send me an email.)

Keys To The Game: I think there are two keys to the game.

Defense. Will the Suns be able to play any? Will it matter with our offense?

Pace. What pace will the Suns play? They have a new head coach in Terry Porter and I'm interested to see what he does with his team in the early going.

Our new Spurs: Mason, Tolliver, Hill, Farmer, Mahinmi. Mason will probably be the only guy that plays. Hill and Mahinmi are hurt. Tolliver's mother died last week and he has been granted a leave. Farmer is a possibility I guess. I expect that Tolliver, Mahinmi, and Hill will be inactive.

Teaser: I'll tell you right now that I can't wait for the first game against the Grizzlies. I have an AMAZING picture of Marc Gasol that I've been sitting on for about 10 months. It's way better than this one of Rafer Alston. 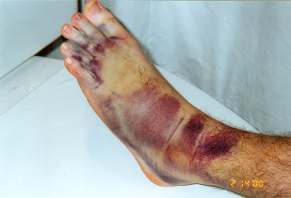 I hope somebody that frequents PtR is going to the game. I want them to pick me up one of these. 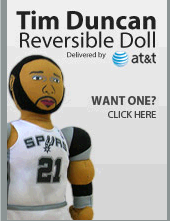 Seriously, do I EVEN want to know what a Tim Duncan Reversible Doll is? Does he cross dress? I have to know.

I'm sorry for the lame thread for the first game. I'm noticing that there are some really cool looking features available that aren't available for FanPosts (which I'm used to) so expect these to get better as I get the hang of it. I've been working like a madman the last 6-8 weeks. I've been in the process of starting up an internet company over the last year. I just let in our first round of beta users tonight. We are LIVE. Which means I am really, really, really ready for this season to start.